A New Sheriff in Town

I have high hopes for newly appointed Baltimore Police Commissioner Michael Harrison. Already he’s been tested by the corrupt “business as usual” from his department and has stepped up with a spotlight and broom.

This week he had a 24-year veteran sergeant of the Baltimore police force arrested for assault, false imprisonment and misconduct charges, stemming from an incident wherein the good sergeant chased down and arrested a passerby who commented on an arrest in progress and kept walking.

Here’s the fuller story. Police have a guy in cuffs who was stopped on a warrant check. A guy walking by says to the cops that they shouldn’t make the detainee sit on the wet ground. Sarge chases after him and the guy tells him, “I’m not running away.” Second (subordinate) cop runs over and tackles the guy. They cuff him and begin the arrest.

Other cops come to the scene and pull the guy to his feet. He asks why he’s being arrested. Sarge tells him, “Just go to jail and take your charge like a man.”

He asks again why he’s being arrested. “Because you don’t know how to act,” he’s told.

Sarge’s report says the guy was “interfering” with an arrest.

The only reason we know what really happened is that both officers on the scene were wearing active body cameras and this time, the top brass didn’t conceal the video.

You have to think, both cops knew they were wearing cameras. They must have been pretty sure of their safety to behave like they did, knowing there would be a video record. I can only assume that incidents like this in the past were covered up and the tapes “disappeared.” I’m thankful that this practice seems to be ending with Commissioner Harrison. 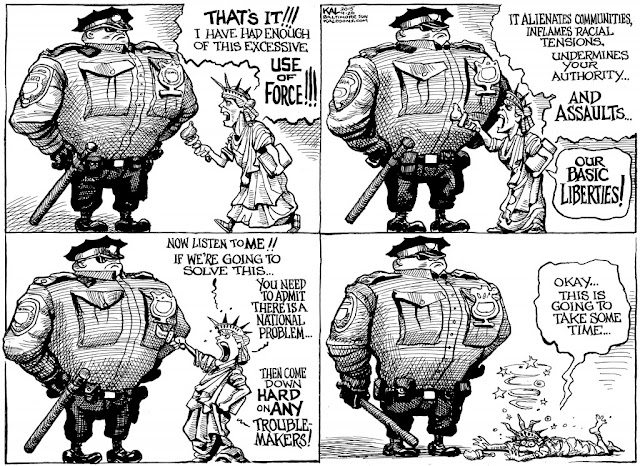 Is it any wonder we have riots in big cities? This belligerent behavior is so hard-wired into law enforcement, they can’t avoid behaving this way. Even with an active US Justice Department Consent Decree in force, even in a city still aching from previous riots over police brutality, even with cameras recording every word and every movement, they still act like sociopaths.

Not all of them, obviously. There are plenty of cops who give candy to kids and have great reputations in the neighborhood, and they all run towards the danger as everyone else flees. But stories like this one are rampant. In the past, it was a perp’s word against the cop’s, so no one gave any weight to what some lying criminal had to say. But now the cameras are telling another story… they’re telling us the criminals have a point.

Baltimore police just arrested a guy for making a comment they didn’t like, as he was walking by. That’s it. Dude’s lucky he didn’t get his jaw broken or get choked out, you know, by accident. Or because the cops were suddenly afraid for their lives.

This sergeant made over $243,000 last year, more than half of that in overtime. That makes me wonder about the nature of that overtime. The Gun Trace Task Force debacle highlighted the relative ease with which their team was able to falsify their time cards to rake in the O.T. I have no reason to think that practice was limited to that one team.

I’m gladdened that the new Commish is putting a stake in the ground this stuff. “That officer is tarnishing the badge that we all wear,” he said. “He’s the person in charge of the culture because he’s the supervisor on the scene. He’s the person who’s supposed to be motivating, coaching, cultivating and developing young subordinates into the right way of policing.”

Baltimore police officers were found violating citizens’ constitutional rights with alarming frequency, even with Justice Dept. officers in the car with them. I wonder how long it will take for the message to soak in that business-as-usual will no longer be tolerated. I presume it will take a few more high-profile arrests of the BP’s finest before the message is received.

Meanwhile, the police union, (Fraternal Order of Police) are fighting all of this tooth and nail. I understand that it’s their job to protect their ranks, but there must be a reasoning in place that the ranks have to be worthy of protection. Those prowling around looking a reason to beat some ass cannot be spared the due process they so breezily deny so many of their arrestees.

Ultimately, prosecutors dismissed the case against the wayward spectator almost immediately. Of course, the guy was picked up again the next day, because his car windows were tinted too darkly and the license plate was “positioned in an unusual manner.” Yep, that’s probable cause right there, isn’t it? Then after they pulled him over, they said they smelled marijuana, so they searched his car.

I guarantee you that they were looking for this guy, ready to ring him up on anything. And the fallout from that? The windows were not, in fact, tinted in an illegal manner. Nor did they find any pot. No word on the “unusual” plate positioning.

They did, however, find seven grams of crack on him. (Presumably, this was his and not planted by the cops, because it was in 172 separate packets.)

Look, the guy could be a scumbag, no doubt. But we have civil rights laws on the books for reasons, foremost that the cops don’t get to be prosecutor, judge, jury, and executioner, all rolled into one. There has to be probable cause to stop, detain and search, and that cause cannot be, “Because I think he’s a bad dude.”

Good luck to Commissioner Harrison. I hope his message takes root with his department, I truly do.

Otherwise, it’s going to be another hot summer.
Posted by bluzdude at 6:12 PM