It heartens me to see Pride Month activities rolling out all over the country. There is a lot to celebrate in 2019. Just in the lifespan of this blog, LGBT people have gone from protesting to demand the right to marry (and all the privileges that go with it), to seeing that right become the law of the land.

Granted, that law is under attack. Hell, it’s the same with Roe V Wade, and that one’s almost 50 years old. It just goes to show that one can never relax; the religious right is always looking for ways to return us to the Dark Ages, all in the name of The Lord, of course.

I’ve written a lot about LGBT rights over the years, because the denial of rights to this segment of the public has always struck me as barbaric. There was when Maryland took up the issue in 2011, letters to the local newspaper in March and August of 2011, when Maryland passed same-sex marriage in 2012, California’s malodorous Prop 8 in 2013, the SCOTUS decision in 2015, and loads of other times that didn’t command an entire post.

The thing that got me from “supportive but inactive” to “militant” on the issue was getting to know gays and lesbians as friends and coworkers. I suppose it’s worked that way all over the country as more and more people come out.

How anyone can condone creating a “second class” of citizens out of otherwise ordinary Americans is beyond me. And ascribing it to the ravings of an ancient book is just insulting.

It is grossly unfair, inhuman and downright un-American to discriminate on a class of people for nothing more than the way they were born. I’ve often said that it’s like persecuting people for having blue eyes.

To paraphrase the popular meme, if your religion requires you to deny basic human rights to an entire class of people, you need to find a new religion. (Or just chuck the whole thing and think for yourself!)

You’d think that if these religious folks believed in the divinity of their Almighty, they’d have to accept that LGBT people were His creations too. That’s probably why so many religious people insist that gays choose to be that way. Then they can feel free to condemn their behavior or as they like to call it, “the gay lifestyle.”

Now I’m reading that a bunch of jagoffs are trying to whip up Straight Pride parades. But before I could even start to formulate a response, it was shown that the idea was started by a couple of these so-called “Proud Boys,” who have a history of crashing rallies and causing violence and trouble. With luck, that association will dampen any enthusiasm for such an event. (I know, may be overly optimistic.)

I hate that whole mindset; that because a historically oppressed minority celebrates or rallies for their rights, these numb-nuts feel they deserve something too. As if straight white males have ever been a persecuted class. Unless you count times when someone takes steps to nullify their customary advantages… That’s when they cry “persecution.” 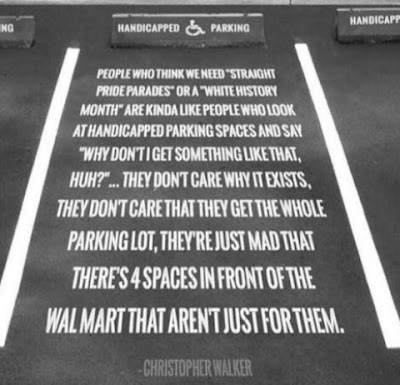 It’s like the old plea for “Children’s Day,” because every day is Straight White Man’s Day. Or month… or year.

Support of same-sex marriage and basic human rights for the LGBT community is yet another reason to turn out at the polls and vote Democratic. The Religious Right would like nothing better overturn the SCOTUS decision codifying same-sex marriage.

Can you imagine the chaos that would ensue? Couples with children who have been married for years, suddenly stripped of recognition? How does one even go about stripping away people’s rights? How would there not be riots?

Isn’t “religious freedom” great? All you have to do legalize your bigotry is to claim that your religion requires it. And then if you meet any resistance, you just claim persecution and play Victim. 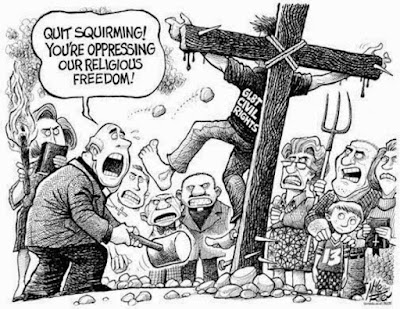