Sorry I’m a day late. Had a holiday happy hour Monday night and wasn’t up for pontificating when I got home. Tonight is another story.

Baltimore Blue Redux
First, I want to follow up on a post I ran in June about the arrest of a Baltimore City policeman after he and another officer tackled and arrested someone who made a comment about another arrest that was going on, while walking by.

After the first incident, the State’s Attorney, Marilyn Mosby, requested past body camera footage from the officer in question, which led to the additional charges. What they found was a pattern of unlawful conduct.

In my original post, I said, “I can only assume that incidents like this in the past were covered up and the tapes “disappeared.”” According to Deputy State’s Attorney, Janice Bledsoe, the state’s attorney’s office normally only receives body-camera footage related to arrests.

If I’m with the state’s attorney’s office, I’m requesting a whole bunch more body-cam footage, just to spin through and look for more such malfeasance. I guarantee this guy isn’t the only one on the force who’s swingin’ his balls around on the beat like he's King Shit of Turd Mountain.

Again, I’m happy that new police Commissioner Michael Harrison is not putting up with this kind of stuff. Here’s to hoping the word spreads through the ranks. As long as the cops are lacking in trust and credibility, they cannot truly do their jobs.

As of now, there are over 300 Baltimore police officers on a list with the State’s Attorney’s office as non-credible witnesses, who cannot be put on the stand. Until that changes, the cops can arrest as many as they want, but they’ll end up right back on the street if they can’t be convicted. 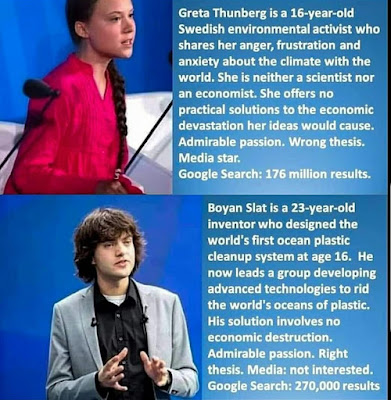 Hey, you misspelled “Person of the Year Greta Thunberg is a...”

The knives are really out for poor Greta. Nothing pisses off the GOP/Proud Boy/Incel crowd like a young girl getting credit for something.

Bottom half: Sounds like a good idea. Why aren’t the rich GOP donors funding this kid’s idea? They could get a whole fleet of these plastic skimmers online. But they don’t really give a shit. Funding environmental projects doesn’t help next quarter’s bottom line. It’s a lot easier to denigrate others who threaten to upset the balance sheet.

Cleaning the plastic out of the Pacific is just one small subsection of addressing the climate crisis. Anything that makes an impact is going to be financially destructive, there’s no getting around that. It’s just that doing nothing is going to be more so. We can pay now and handle it in an effective and thoughtful way, to set our world up for the future, or we can throw money down the toilet later, when Miami, the Outer Banks, and Long Island are under water. 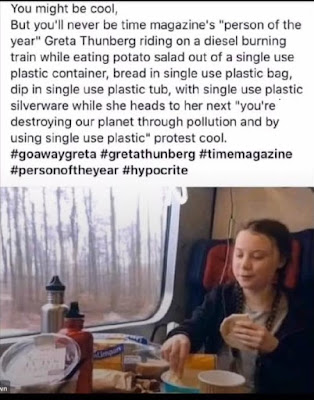 This one is just a mess.

“Riding on a diesel burning train…” She’s traveling across Europe, what’s she supposed to do, para-sail? Getting hundreds of people from place to place on public transportation IS a benefit to the environment, regardless of the fuel source.

Single use plastic (this that and the other)…  Which can be recycled or reused. Who says it’s single use? (You can’t really tell anything from the picture.) Besides, she’s still a 16-year old girl. I’m sure she used what the train service gave her. She’s not the Queen, traveling with her finest cutlery.

Here’s the macro flaw of most of these kind of attacks: Greta doesn’t have to be an expert on environmental science, she doesn’t have to be the paragon of reusable resources. She’s allowed to have flaws and human faults. That doesn’t make her wrong in what she’s doing, which is taking 99% of climate scientists at their word and demanding the powers that be take action, to preserve some kind of world for her generation.

Obviously, if she wasn’t so effective, climate deniers wouldn’t be so scared of her that they make up mile-wide-and-inch-deep memes to undermine her message. 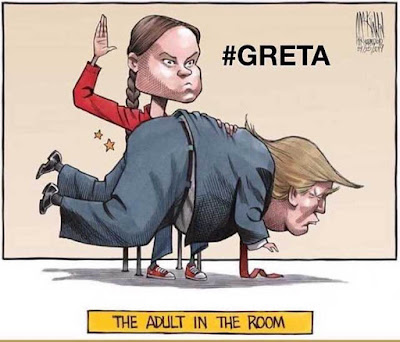 Back to Square One
Last week, the Supreme Court let a Kentucky law stand that forces doctors to show the woman an ultrasound and give her a detailed description of the fetus, even if she doesn’t want to listen.

Yes, it’s another law passed by white men who insist they know what’s better for a pregnant woman than she does, herself.

If the Supreme Court is going to start upholding these (and many other) onerous, sadistic, misogynistic laws, the only recourse now is to go back to the grass roots and elect people to state legislatures and governorships who will revoke these destructive laws. Local jurisdictions put these laws in; they’ll have to be the ones to take them out too.

That takes the five Republican men of SCOTUS out of the doctor’s office, for good (we hope). 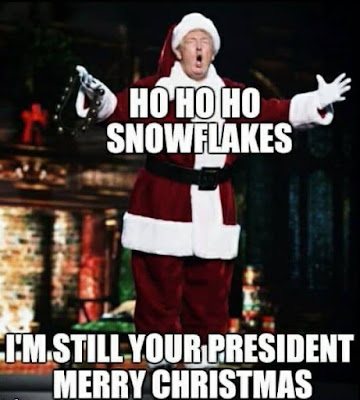 Not for long, motherfucker, not for long. #President*

To think that the police officer got away with all that for so long is crazy, and even though we know it's going to cause lots of paperwork and overturned cases because of that shady police work, it'll be worth it to do the legwork. I know there are problems with drugs and violent crimes in B-more, but there's no reason to go around fabricating evidence to secure arrests. Even worse are the people who knew what he was doing and allowed it. Such a sad situation. Reminds me of all the people who helped R. Kelly hook up with kids, and helped him to cover it all up literally for years. Conspiracy is alive and well. (I had to retype this without all the typos-lol) Sorry.
Hugs, RO

That's a big issue. How did he get away with this crap for so long, even wearing a body cam? Obviously no one was reviewing the footage, not until he got busted out for something else.

I know there's got to be a ton of footage available for review and it would be an incredible amount of work to review everything. I would make it a policy to review one day of every officer's footage per week, something like that. Just take a random sample, so that no one knows which day will be reviewed. Not perfect, but it's better than just filing all the footage unseen. Or, heaven forbid, erasing it the next week.