Did you get your $1200 check yet? Man, wouldn’t it figure that Trump would hold up the whole production line just to get his name on those checks? And he can’t even have them put in the “From” line; he’s been reduced to a memo. Can’t wait until that time when he’s merely an afterthought.

I’m surprised he let the direct deposits go out at all because there’s no way for him to attach his brand to them. That’s all this is, you know. Branding… the art of smearing your name all over everything, which is what he’s supposed to be a master at. It must work though. Just look at our world. My kingdom for a public surface that doesn’t have a brand scrawled across it.

I’m surprised there hasn’t been a company to pay people to put their logos in their rooftops, for the benefit of airplane passengers and Google Satellite hits. And speaking of, I loved it when I heard there was some dude near the Milwaukee airport who wrote in huge letters on his barn roof, “WELCOME TO CLEVELAND!” just to screw with people. I wish I’d thought of that back when my family lived in an old farmhouse with a barn, near an airport. (And I guarantee if I’d have pitched the idea to my Dad, he’s have been down with it. Dad loves to screw with people, which is no doubt where I got it.)

Pass the KY
I knew it, and I swear I wrote it down somewhere, (that I can’t find) that if Mitch McConnell were to find himself in a tight re-election race, the fix would come in. As we have it, he is running neck and neck with a Democratic challenger and what do we have here? Kentucky just passed a Voter ID law, with an override of the governor’s veto. Now Kentuckians need a government-issued ID to vote.

So that leaves seven months to get one right? WRONG! Kentucky DMV offices are closed due to the pandemic. And I bet most stay closed until the second week of November. Any that open before that will be in affluent areas. If you just moved to Lexington, you’re S.O.L. This is Republican malfeasance at its worst and most cynical. As the Vox article I linked above stated, “the primary form of voter fraud addressed by these laws, impersonation fraud at the polls, is only slightly more common than unicorns.”

Any election law should err on the side of guaranteeing people their chance to vote.

It’s funny how the people who protest and bitch about any perceived assault on their “liberty” take a pass on this issue, where one political party passes laws intended to hinder their opposition from executing their constitutionally-given right to vote. I’m pretty sure if it was the other way around, these “Liberty” people would be back in the streets.

Taking Liberties
Isn’t it funny how conservative news outlets and political mouthpieces are always getting people ginned up about assaults on amorphous things like “liberty” and “freedom?” There’s a reason for that… it’s cheap. It costs them nothing to get people wound up about perceived affronts so that they can be used for political purposes and pursuit of power.

You’ve seen those assholes on TV protesting state offices for daring to “infringe upon their liberty” as a result of the Stay-at-Home orders placed to keep them from dying and taking others with them. I only hope they find a way to use all that extra “liberty” they gained to help them breathe after they pick up The ‘Rona.

I say the state should demand a Government ID to stage these protests. If you’re going to block hospitals and keep medical staff from doing their jobs, then let people know who you are! Then when they inevitably show up at the hospital, they can be shown right to their own private sleeping bag… in an alley behind the hospital dumpster, where they belong.

Just goes to show what I’ve been saying for years. Republicans lack empathy. They seem incapable of viewing the world in any way other than “Me first.” You want to be a rugged individualist? Go fight the alley rats for scraps. Making decisions based on what’s best for the community is a foreign concept, especially if it comes at a personal inconvenience.

It’s 4th and Long
I’m kind of surprise the Republicans are fighting this hard to stay in power. It would probably be better for them if they just punted on this election cycle and let Biden and the Dems get tasked with putting the country back together.

Then they can sit on the sidelines like they did during the Obama years, obstruct every effort and then carp about how everything isn’t fixed yet and OMG look at the deficit!

We’re going to hear about that A LOT, once the Democrats are in charge. They didn’t give so much as a whimper when this administration ran the debt up out of sight, and that was BEFORE the coronavirus spending.

So when the Democrats want to rebuild the governmental infrastructure at places like the EPA and CFPB, the GOP will cry “poor” and try to kibosh the whole thing, “for the future of our children,” or some shit. Same with spending money on actual physical infrastructure. They had two unfettered years where they could have come up with any number of bills to address crumbling roads, bridges, tunnels, railways, dams, and whatnot. But they didn’t produce a single bill to address infrastructure. Couldn’t afford it after that big tax cut for the 1%. Also, they don’t care. They know the helipads are in good shape.

Phil the Burn
Did you see Dr. Phil step in it last week? Look at this: 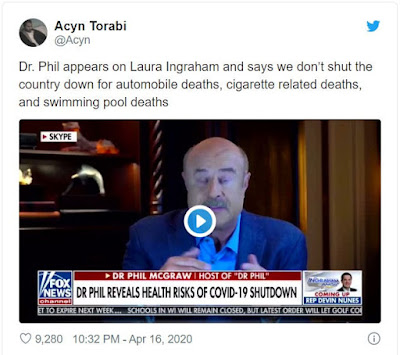 I know others have dissected this, but I did too and have had to sit on it for a week. I’ll not be penalized for only posting on Mondays!

What we have here is a simple apples to oranges fallacy, the kind Fox “News” likes to use so much. The thing here is that none of these other comparisons involve a contagion (for which there is no vaccine). Auto accident mortality is addressed and mitigated in a number of ways, like with seat belts, speed limits, vehicle safety features, etc. Cigarettes are already a taboo and there are many laws regulating where they can be smoked, with an eye toward removing the danger to the non-smoking citizens.

The thing with pool deaths; I heard his numbers are way off, but that’s beside the point. Someone drowning or cracking his head off the diving board isn’t going to hurt anyone else.

This coronavirus is a new threat and we just don’t have the tools to fight it yet, other than the prevention of transmission, or social distancing. So we can either keep everything open, run willy-nilly all about the country, and then lose millions of American lives.

Dr. Phil should know better, but it seems he’s turned into another shill for the corporate overlords, who want their next quarter earnings statement turned around, now.

Always Look on the Bright Side of Life
On the other hand, it’s not been ALL doom and gloom.

Sweetpea was talking to someone in the neighborhood while out walking our dog. She mentioned how she hadn’t seen a pack of toilet paper in any store since the middle of March. She said we weren’t out yet but it was becoming a growing concern. Our neighbor said she’d be on the lookout.

Cut to later that week, when we got a knock on the door. It was our neighbor, bearing a big 12-pack of TP. Wouldn’t take a dime for it. Not bad for a “rat-infested mess” of a neighborhood.

In other news, we tackled some true “quality of life” issues over the weekend. First, we brought order to our plastic-ware cabinet. I swear, it’s taken me 10 minutes, sometimes, just to find a container and the correct lid. So after taking out every piece, matching up lids to containers and tossing the leftover pieces, our Tupper-jungle looks like this: 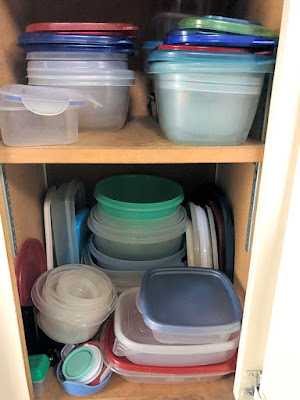 Then after feeling the heady rush of accomplishment, we tackled the dreaded Plastic Bag Cabinet. We had our work cut out for us, believe me. 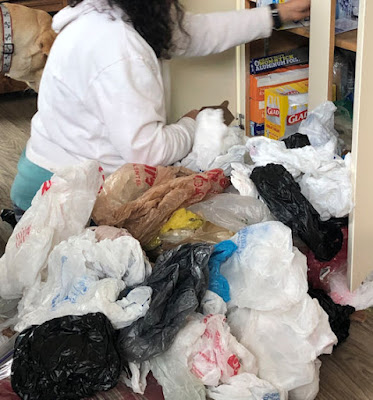 I didn’t know I married a Bag Lady!

I always considered myself to be pretty stubborn, but my babeh is right up there with me. She went through all of these bags, one by one, and sorted them out. Ones with holes were “Recycle” vs. those without holes were “Save for Re-use.” Our re-use is like 2% small trash can liners and 98% doggy doot bags. You don’t want holes in bags you’re going to use for poop clean up, hence all the sorting.

And when you have a 90-lb eating machine for a dog, you can’t have too many doot bags. Although I can see that once all the localities ban plastic bags, people with dogs will be hoarding them like toilet paper.