As we charge forth into the hardcore election season, there’s one thing that’s crucial to keep in mind: It’s not just Trump who’s sent this country down the tubes. Trump is the sideshow. I guarantee, if Mike Pence would have been president, very little would have been done differently.

In my opinion, things could have been much worse if this were a Pence administration. He would have hired people who got things done. They could have done a lot more damage to governmental infrastructure because they wouldn’t be stepping on their own dicks every week.

Nevertheless, look at what Trump has already done…

·        The EPA has been gutted with major rollbacks on pollution and environmental controls.
·        The CFPB has been defanged, with the people running it dedicated to NOT doing anything that will cost the banks any money. The “financial watchdog for The People” is gone.
·        The State Department is a shell of its former self. Staff reductions have left it with no more than a skeleton crew.
·        Huge tax cuts for the 1%, scraps for the rest of us.
·        Disbanding of the pandemic response team.
·        Former industry execs are running the bureaus that used to regulate the industries they came from and it’s not because they know how to be tougher on them. It’s so they can ensure there will be little government interference to get in the way of quarterly profits.
·        Appointment of conservative judges with little or no trial experience, who rule against abortion at every turn, against any program or regulation that will cost money from Business, against the loosening of immigration policies, and for whatever bright idea the Republicans decide to push next. (Look at the judge who just ruled that Justice can refuse to prosecute a friend of Trump’s who has already pleaded guilty, confounding the country’s legal leaders and scholars.)
·        Carving out huge piles of COVID dough earmarked for the richest, most prosperous companies in the country, to be handed out in secret, with no conditions.
·        Packing police departments with so much military hardware and equipment, they now function as an army to be unleashed on average Americans.
·        Tariffs on foreign goods… wait… no, that’s just Trump, who doesn’t understand how tariffs work.
·        Limited Federal response to the coronavirus, which is a hallmark of Republican governance: Let the market hand it. You’re on your own. You saw how they’re ending the funding for COVID test sites, right? That’s vintage Republicanism… cut funding, declare victory and fold up shop, then blame the Democrats when the virus is still raging afterward.
·        Withdrawing from the Paris accords and the Iran agreement.
·        Inactivity on and hostility to the reality of climate change.
·        Draconian immigration policy, including sealing borders and detaining pretty much everyone, without a nod to human rights, let alone due process. 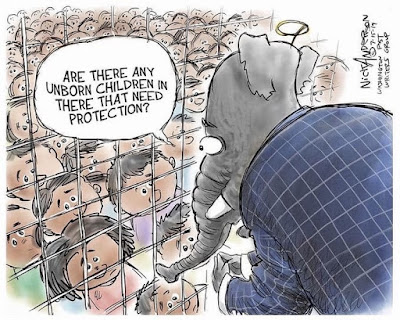 None of those are things that originated from Trump. These are Republican positions that would have been carried out by any Republicans in charge of this term. His cabinet, his advisors, and the GOP Senate has given him cover to accomplish all of these things because it’s what Republicans want. Hands off big business. Screw the environment (as far as doing anything that will cost money.) Keep trying to overturn Roe (not that the leadership actually cares about abortion but they have to throw their religious voting base a bone. What they care about is weaponizing abortion to use against Democrats.)

If Biden’s smart, he won’t just run against Trump, he’ll run against all the Republicans, using the points above. These are their big ideas, so use them as weapons. I know he wants to unite the country but from what I’ve seen from the last 30 years of Republicans, they won’t compromise an inch. If we’re going to get anything done, we’ll have to do it on our own.

That’s why voting out Trump without making changes to the Senate and firming up the House will not be enough. A Democratic president can undo anything Bunkerboy did via Executive order, but it’s going to take cooperation to re-fund the agencies Trump took apart. You know that once the Democrats are in charge, Republicans will rediscover their long lost enthusiasm for deficit reduction and try to keep the government from repopulating itself with competent staffing. To Republicans, there’s always room in the budget for tax cuts for the rich, but when it comes to looking out for the rest of us, there’s never enough money.

It won’t even be enough to just win the Senate; we’ll need 60 votes to get anything done. Remember how much trouble Mitch McConnell gave the Obama administration, even as minority leader? Mitch has no shame and no pity. He’ll filibuster every single bill for 8 years if he has to until the Koch Brother or the Mercers tell him differently. So we can’t lose our focus if nothing major happens in the first two years of a Biden presidency. We may need to wait for the 2022 elections to get the Senate where we need it.

But at least we can stop the bleeding.

Of course, all this is assuming we can win the presidency in November. The Republicans have been saying this will be the most rigged election in history. Part of me thinks they’re just getting their excuses and battle plan ready for the massive blue wave. But the other part of me thinks they’re finally telling the truth. It WILL be the most rigged election ever because they know how hard they’re working to rig it.

I would be much more comfortable with Biden’s polling lead if I didn’t know the lengths Republicans are going to suppress the vote. Kentucky was just a warmup. Anywhere there is a GOP governor and legislature, you’re going to find stricter voter ID programs, more restrictions on voting by mail, and more polling stations closing in urban areas. It’s right there in their game plan and they’re not even hiding it any longer.

Keep in mind that the national polling numbers aren’t very useful. Hillary had good national numbers too. The only ones that count are the state by state numbers because that’s how the election will be won and lost. When Biden is ahead by 15% in each battleground state, then I may be happy. But it’s still just polling numbers. There’s a barrier between telephone polls and voting booths which is being heightened by the GOP every day.

Also, be prepared not to know who the winners are on Election Night. Mail-in ballots are going to play a big role in many states and they probably won’t be counted until later in the week. Try not to let the speculation run away with you while the prognosticators fill up the hours with prognostications.

Republicans will be claiming voter fraud while simultaneously rebutting the same charges against them, as the news stations run film of huge lines in black neighborhoods, due to lack of equipment.

We’ll know when we know and with any luck, the margin will be so big it will have been impossible to fake.