What I Love About the Democratic Party

I saw this on Facebook last week and I had to make a quick decision. 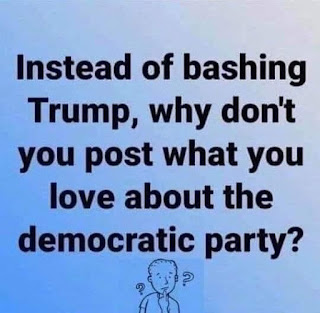 Do I furiously peck out an answer right there and then on this friend’s timeline? Nah. I hate composing long, involved posts on a cell phone. So, blog post it is! This way, I can excerpt it onto my own timeline later.

In looking at this meme, you could take it two ways. If a Democrat has posted it, it could be a plea to be less negative and come out for what we believe in rather than throwing mud at Bunkerboy. But this was posted on a conservative friend’s timeline, who posts one poorly informed Republican meme after another. So I took it as a challenge, which I gladly accepted.

Republicans think our only uniting cause is hating Trump because that’s what they’re told. If they only get their news from Fox “News” or other conservative sources, of course that’s what they think we think. Fox is never going to present a coherent or compelling version of the Democratic point of view. To them, Democrats are just the black hats who hate America, there to make victims out of Trump and God-fearing “real” Americans.

So, since they asked, here’s why I love the Democratic Party:

·        The Democrats care about and fight for the middle and lower classes, not the rich. Dems try to get tax cuts for us and raise taxes on the richest Americans. Dems are still trying to get COVID relief to us non-rich. Republicans are trying to do the opposite. They set aside $500 million for “small” businesses, which big businesses gobbled up, and another $500 mil to be doled out to Big Business in private, with no transparency and no strings attached. Their leadership has indicated that direct financial help to all Americans is a non-starter. When the rich donors tell the Republicans to jump, they ask two things: 1) How high? 2) Onto whose necks?

Catering to the rich is the Republican Prime Directive. All the Democrats have to do is not do that. This point alone is enough to marry me to the Democrats forever.

·        Democrats believe in and support science, and rely on scientists and experts in creating policy on climate change, pandemic response, pollution limits, reproductive rights, and other crucial areas. They are not bound by religious dogma when it comes to creating public policy.

·        While the majority of Democrats say they’re religious, there is room for non-believers and atheists within the Party. That is not true of Republicans, who let the religious concerns of a small percentage of Americans govern their approach to social issues.

·        Democrats, as a party, treat women as people, not property. Their stance on abortion and women’s roles in family and government are starkly different than Republicans’. Look no further than the current makeup of Congress, which holds 105 female Democratic Senators and Representatives vs. 23 Republicans.
The Republican party fights hard not only against abortion but birth control, which is the number one way to prevent pregnancy. By promoting these two opposing things, one can only conclude that they are more interested in State control of the female body than exhibiting any magnanimous reverence for "life." So they promote abstinence instead; while it IS effective birth control, it's still another lien on a woman's body.

·        Democrats intend to make America a leader on the world stage, which is a cosmic change from the circus we currently have. We’ve turned on our allies and dance to our enemy’s tunes. Democrats will change that.

·        Despite the constant presidential talking point, Democrats don’t rig elections. They are in favor of seeing to it that every American can vote if they want to, which just so happens to line up nicely with what America is all about.

Republicans are bending over backward to make it harder to vote, especially in areas where they fear they won’t do so well. They harp on “voter fraud,” a problem that has affected a minuscule number of votes, then take draconian actions to “correct the problem” by clearing voter rolls without confirming the accuracy, eliminating precincts and voting machines in Democratic areas, requiring specific IDs that Democrats are less likely to have, and then closing the MVA branches in those same neighborhoods.

None of that has anything to do with voter fraud. It is 100% voter suppression and is 100% un-American. Democrats don’t do that. Democrats fight to win votes with plans and ideas. If Republicans thought they could sway voters with concrete plans for what they intend to do, they wouldn’t spend all this effort to game the system. The best they manage is to misrepresent what Democrats want and then attack that.

·        Democrats appoint experienced judges. Have you seen the recent Trump nominees? I’ve got more trial experience than a lot of them. All one has to do to be a Republican judicial appointee is rule against abortion providers, and for business interests.

·        Democrats use the Justice Dept. to right wrongdoings, not to sic on their political enemies.

·        Democrats want to demilitarize the police. Not every jurisdiction needs enough firepower to repel North Korea. Democrats realize that not every situation requires a police response and we can’t arrest our way out of all of society’s problems.

·        The Democratic Party is the party of equality of race and sexuality. Democrats know that while all lives matter, the Black ones are under siege from both government and private institutions. Democrats carry the spirit of Lincoln, regardless of party labels. Republicans gave up the right to celebrate Lincoln when they abandoned the Democratic Party in the 1960s after of the passage of the civil rights and voting rights laws and made Republicans the party of racism.

Democrats got inter-racial marriage and same-sex marriage legalized while Republicans fought hard against both. There is no logical argument against either, only fear and religious nonsense.

·        Democrats are also for a sane immigration policy, that doesn’t include separating families and throwing kids into cages. Republicans campaign by saying Democrats want “open borders,” which is quite untrue. What they do want is an immigration policy that allows people to actually immigrate. What the terms and limits will be are subject to discussion.

·        Democrats want reasonable gun laws. No, despite the half-cocked talking points, no one wants to disarm America. But there is still no need for semi-automatic weapons and high-capacity clips. This is military hardware that’s better left to the military, not to a bunch of rednecks who want their Costco to reopen. Democrats passed an assault-weapon ban years ago and all it did was significantly lower the rate of deaths from gunfire. The country did not collapse into anarchy. Democrats would like to pass another one.

And perhaps someone could enlighten me with the reason Republicans shot down prohibiting gun sales to people on the federal Terrorist Watch List. Because for the life of me, I can’t think of a valid reason why Republicans would want terrorists to buy guns in America. I know the NRA balks at any restriction on gun sales but perhaps this is a tad over-zealous?

Maybe a really shrewd Democrat will propose a requirement that every African-American male buy a semi-automatic rifle. Nothing will get the Republicans on board with an assault-weapon ban faster than that.

·        Democrats want a national healthcare plan, whether it’s a revitalized ACA or a single-payer system like every other first-world country. It CAN be done but it will have to triumph over the will of those with an interest in the established “for-profit,” system. Those folks will not give up their billions easily and will work overtime to convince you that anything else is socialism, communism, or any other “ism” that scares you.

Unfortunately, what they can’t do is show how the current system is better, not with people going bankrupt left and right from medical bills, or having to choose between food and prescriptions, or fighting their insurance company to be given the best treatments as opposed to merely the cheapest.

·        Democrats believe in education. They believe in science, experts, and those with applicable experience. Democrats put those people in charge of departments that coincide with their expertise, rather than businessmen sent to neuter the agencies they run so that they don’t hamper profits of the businesses they came from.

Republicans continually deride educated people as eggheads in some ivory tower, somehow set apart from the “real world.” Which is horseshit.

It’s not a coincidence that the reddest states are the ones with the poorest performing educational systems. That’s by design. Republicans don’t want thinkers, they want pliable people who look in the Bible for answers about how the world works, instead of a science book.

Republicans’ antipathy towards education is self-preservation because the more people know, and the better they’re able to think and dissect an argument, the better they are at avoiding the manipulation of deceptive advertising or misguided memes.