Now into the second week past the election, the deluded Right is still clinging to the idea that somehow the election was stolen from them, due to what must have been a vast criminal conspiracy that entailed more people voting for the other guy.

At every turn, both Republican and Democratic voting officials have stated that there were no discernable voting hijinks, other than random clerical errors that happen in every election. (And are statistically negligible.) Not a single investigation from people who are extremely motivated to find voting malfeasance has been able to do so. 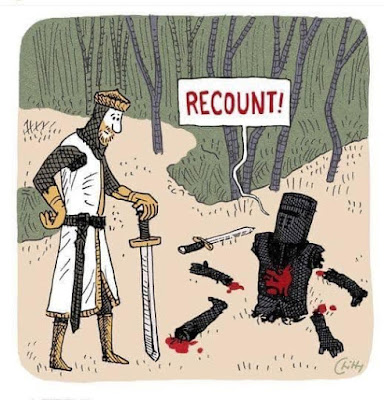 You know, if it doesn’t quack, it doesn’t waddle, and it doesn’t float around on the water, it’s just not a fuckin’ duck, and it won’t become one no matter how desperately someone wishes it.

Even Fox “News” has been going, “You know, we think he won.” I mean, they called Arizona before anyone else, thus earning the Orange Turd’s ongoing wrath. I mean, where is a despot supposed to turn when his own state-run media stops backing up his lies? OANN? Hell, I couldn’t even find it on my Comcast system. I even tried to use the voice function. All I got was an error message that said this:

“This television is equipped with a BS Chip. The BS Chip blocks the transmission of known purveyors of BS into households who might be either enraged or convinced by smoothly delivered lies, half-truths, skewed graphics, and logical fallacies. To view a channel blocked by the BS Chip, you must apply to the FCC and prove that you’re under 55 and your interest is purely academic. But we don’t recommend you do so. Surely there’s a game on somewhere, isn’t there?”

I tell you, the tech in those “Smart TVs” is really advancing.

So, how do Republicans square these hard, cold, facts with the bullshit stories with which they surround themselves? Well, it seems that they’ve started their own social media site: Parler.

They got tired of having mean old Twitter and Facebook correct or block their fact-free diatribes and racist calls to arms, so they’ve taken their tiki torches and gone home to play in their own yard, where no one can tell them anything they don’t already know.

Now they can claim there were a million MAGAts at the Million MAGA March and there will be no photographic evidence to the contrary. (Like this.) They can claim there was a vast rollout of Dominion voting machines bankrolled by George Soros, which changed Trump votes to Biden votes, without which Trump would have won Texas unanimously. They can forget about wearing masks because the Rona is merely a liberal plot to curtail their freedom. They can blow on dog whistles as long as they like and no one will ever make them feel like a racist because of it. In fact, it will remind them of the good old days, where the only thing you had to do before telling a racist joke is look over both shoulders.

I read somewhere that George Soros is one of the financial backers of the Parler platform. I’m not sure if that’s true, but it would be delicious if it were.

I hope that Facebook and Twitter don’t experience a mass exodus of conservatives, but it’s purely for selfish reasons. If they all leave, where else will I get my “Debunkery” material? I’m sure as hell not venturing over there. It would be terrible for my blood pressure.

Director’s DVD Commentary/Disclaimer: The BS Chip is a total fabrication, but wouldn’t it be cool if it weren’t? It just kind of leaped out of my head as I was considering if I could even find OANN on my assortment of cable channels. It happens.

Tales from the Hood

I’ve had this story circling the drain for months now but I’ve been waiting until I could marry it to a short primary topic. And here we are.

Our ice-maker is going screwy. You never really think about your ice-maker until you go to scoop out a fistful of ice for your gin and tonic and only come up with cold dust. Sweetpea and I go through a good deal of ice, especially in the summer, so this icy snafu went mission-critical a few months ago.

Upon investigation, we noticed that when the ice dumps, sometimes a couple pieces get stuck in the apparatus, which locks it up and prevents it from making any more ice. So we began checking on it more and more frequently, to either jiggle out the wayward wedge or melt it from the apparatus with finger heat.

One evening a few months back, I was endeavoring to unclog a piece of ice, but it was really jammed into the works. With nothing to grab onto, I had to settle for trying to melt it by pressing alternating fingers alongside it. It was in one of the rear-most slots, so I had to reach waaaay into the back of the freezer and curl my finger around the works from behind. It was kind of an awkward position.

At last, I felt the last of the ice chip melt away and the lever began to lower, signaling that it was resetting. The lever sits on top of the pile of ice (when you have enough ice to make one). When the pile of ice shrinks, the lever lowers and when it goes all the way down, activates more ice making.

What I didn’t know was that there are all kinds of gears and moving parts on the inside of the ice-making apparatus, right where I had my ring finger. As everything started moving, a piece of metal clamped down on my fingertip, locking it (and me) into place. As I pulled ever harder, this metal piece squeezed all the firmer, steadily increasing the pressure. Sweetpea was in the kitchen with me and I began to call out... “Honey… HONEY…”

I don’t think I said anything else in actual English because, at that point, I realized that I was about to be literally trapped there by the fingertip. I began to quickly consider the consequences. I mean, who do you even call for something like this? 911? The Maytag Repairman? How long would I have to stand there with my finger in the freezer and the ice-maker chomping on my finger?

I didn’t know how much force this thing was going to eventually apply but I decided I’d better pull my damned finger out of there no matter how much skin or flesh is scraped off. And I did.

I anxiously examined my finger for damage and was quite relieved to see that it was just a cut. 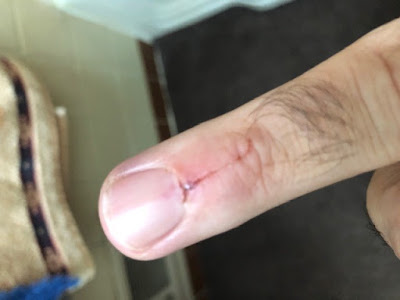 (This was AFTER it was all cleaned up.)

It was numb for a while but I was none the worse for wear. While it seemed like an hour-long ordeal, in fact, the whole thing, onset to escape, was over in about 15 seconds.

Good thing I got out, or else I KNOW my picture would have been on Facebook, or maybe even a video, with one finger stuck in the freezer and another one gesturing at the camera-person.

We still have to clear the ice-maker but I learned my lesson quite clearly. There is no more melting the ice with fingers. Now the first option, if it doesn’t pull out clean, is to shatter the ice with a knife handle.

A BUTTER knife. I do not intend to bleed all over our ice bucket. Even if it would make a more realistic Bloody Mary.