Tonight, on the eve of Election Day, we sit poised to possibly, probably, hopefully, maybe ending the most embarrassing and dangerous era in American politics. Like on the eve of any big game, I’m wary of coming off as overconfident and jinxing the outcome by offending whatever gods there are in charge of governance. Polling tells me I should be cautiously optimistic but Republican rat-fucking tendencies render me just cautious.

I feel I’ve done what I can. I’m not a joiner or public activist, so I’m not banging on any doors or making calls. I’m a writer, so I write. I’ve made my targeted donations. And my vote is in the can.

In fact, I got an email from the state of Maryland this morning telling me my vote has been counted.

That’s nice to know. Not that I’m worried about hijinks in Maryland. I think our state has it pretty buttoned-up, and we’re nowhere close to being a swing state. Suffice to say, no one really cares what happens here other than us locals.

They also gave me the opportunity to download my I Voted sticker. Unfortunately, you can’t download the sticky stuff, so I had no choice but to staple it onto my t-shirt. What the hell, it’s not like I leave the house, anyway.

It was nice that they gave me a choice of styles though. 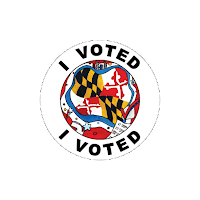 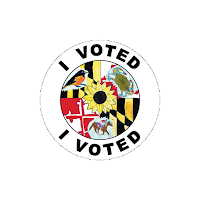 I like the one on the right… less schizophrenic. I can’t even tell what’s going on in the one on the left. All it says to me is, “Maryland is for Stoners.”

I took tomorrow off work so I can stay home, maybe run a few errands, and binge-watch CNN to see where the trouble is coming from. I probably should have taken Wednesday instead, because that would be when the real shit show happens, but you just never know. I thought it was going to be a long night in 2012, but that was wrapped up by 11:00.

I saw some people talking about making Election Day a federal holiday. I think it’s a nice idea but I don’t see how it will accomplish what it’s intended to do. They think it will give people an opportunity to vote without affecting their jobs or income.

At best, though, I see it as just another President’s Day or Labor Day, when government offices, banks, and big businesses get the day off while everyone in the service industry remains at work. Hell, we can barely close for Christmas as it is. The office people can already manage to vote; it’s the rest of the country that needs the time set aside.

It would be better for all if they would just make uniform standards to manage the process and be aggressive about soliciting votes. The current politicizing of the voting process cannot stand. Surely someone can come up with a formula looking at population density and calculate how many precincts and voting machines are needed to handle the volume. There’s no excuse for anyone having to wait for hours to vote. It happens because it’s by design. Don’t tell me any state government can’t find the money to provide voting machines. Show me their budget, I’ll find some cash in there.

It’ll be like that scene in the movie “Dave,” where Kevin Kline plays the president’s body-double and remains in the job after the president has a stroke. Then he has his accountant buddy help him look for ways to cut the budget and free up some money for a kid’s homeless shelter, over the protests of the crooked chief-of-staff. I’ll get the machines into all the right places and still have time to flirt with Sigourney Weaver. 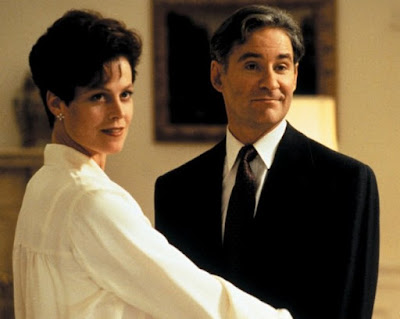 Anyway, my point is that inventing a national holiday to vote won’t fix the problem because it’s the people working at gas stations or 7-11 or Walmart that we need to help vote. You think any of those places are going to close for a day when there’s money to be made?

We need a sane voting system. We need to drop the stigma regarding mail-in voting and get the post office back to peak efficiency. Maybe someone could figure out a secure way to vote via internet. It’s got to be possible. It’s the duty of a free nation to make it as simple as possible for its citizens to vote. Anyone putting up barriers is acting against the very fabric of this nation. The COVID has forced the states to become creative to facilitate voting in a way that doesn’t endanger the voters.

We just need to eliminate those who are vigorously trying to tamper with the system with lawsuits and sabotage. We need to keep random clowns from storming voting centers to “observe.” Republicans aren’t even pretending to want a fair election, they’re going full-on destructo-mode.

Texas is becoming a joke. They’re trying to invalidate 130,000 perfectly valid votes (from Democratic Harris County) because they voted from their cars. Seriously. Same voting machines, just used by people in their car. This is after it was approved every which way, in advance.

Then there’s the regulation of having only one ballot dropbox per county, which is insane. There is literally no good reason for that other than willfully making it harder to vote.

Then this weekend we saw the Trump pickup truck brigade, surrounding and threatening Biden campaign busses. People kept asking where the cops were. I figure they were in the pickup trucks with the rest of the yay-hoos.

All this effort to prevent people from voting… it tells you something. It tells you that the rich, white Powers-That-Be don’t like it when The People want their say. They want to keep things exactly the way they are right now so that they can continue to feed at the governmental trough, like it’s their birthright.

Money for anyone else is Socialism. More money going to The People means less for those who already have the most. And they know there are more of “us” than there are of “them,” hence the systematic suppression of votes. They used to say it was to combat (non-existent) fraud but they don’t even bother with that anymore.

So, with any luck, we’ll know Tuesday night if we can boot the inmates out from running the asylum, or what lengths the morally corrupt GOP will go to keep their death-grip on the levers of power. I’ve got a bottle of Maker’s Mark set aside for either celebration or the drowning of sorrows.

Damn it, I KNEW I should have taken Wednesday off.

Yes, you probably should have taken off today too, because there's still lots of stuff going on it seems. Hold on the Maker's Mark either way!(lol) Hugs, RO

I totally agree. What was I thinking? Razor thin margins, all those votes still uncounted, and the Orange Turd is out there claiming victory.

I'm a canvasser at Md Board of Elections.
Many cameras,many checks and balances by opposing parties. Many absentee ballots...more than ever before. We are sworn in on camera.
It's Pinky,doing my civic duty. I'm in the action...a cog in the wheel.
God Bless America
Hope you both are well.

Good for you! I'm thinking about doing election work once I retire. I can't sit around and watch sports and movies ALL year...