In the aftermath of the 2020 elections, I’m seeing a lot of upheaval, especially on liberal sites, about the Electoral College. We’re seeing its limitations (or features, depending on your point of view), as a way for the last two Republican presidents to lose the popular vote but win the election. If we were just counting up votes, Biden would have been considered the winner by the day after Election Day, at least.

But the Electoral College requires us to go state by state and through a convoluted formula, depending on 50 different voting systems, structures and regulation sets to come together and crown a president. That makes for a lot of room to attack the process, which the Trump campaign is vigorously trying to do.

So I can see the attraction in creating the simplicity of a popular-vote election system. Place the votes, count the votes. Whoever gets the most, wins. Why over-think it?

I know some people say that we need the Electoral College or else presidential candidates will ignore everywhere but the big population centers. I don’t think that’s a big deal because presidential candidates already ignore whole regions because they mainly campaign in big swing states. They practically live in Pennsylvania, Ohio, Michigan, and Wisconsin, plus Florida and Arizona. The rest of the south, it’s already known they’ll go Republican. The northeast? In the bag for Democrats. Same with New York, Illinois and California. So either way, some states are going to get ignored. Tit or tat. Pool or pond.

Here in reliably-blue Maryland, up until this year, we hardly ever even see national political ads. I think this year was different because they ran a lot of ads on TV solely to appease or antagonize the TV-Watcher-in-Chief.

Still, when I see the calls to eliminate the Electoral College, it’s depressing to me that people are dwelling on it because it’s a complete waste of time. The Electoral College isn’t going anywhere within our lifetimes, because it is included in the Constitution. To change that would require an amendment to the Constitution and that’s just not going to happen. Hell, we can’t even get an amendment passed saying that women are equal to men, which should be a basic understanding of the modern world.

So we’ll never get the 38 states needed to ratify such an amendment, nor will we ever get it through Congress, short of a veto-proof/filibuster-proof Democratic majority. That’s because the Republicans will never, EVER go along with eliminating their single best chance to win the presidency again. They NEED the Electoral College because they can’t count on continued racism to carry the wagon and there just aren’t enough rich businessmen to win the election for the Republicans.

At first, I thought having each state reformulate its approach to assigning electoral votes would be a good idea, like Nebraska and Maine did so that the will of different regions are reflected in the end result. But the problem with that is that it will become another way to gerrymander. Whoever is in power will draw the districts to favor their own party. Gerrymandering has already ruined the House of Representatives; no sense in skewing the presidential race the same way.

What I’d like to see happen is to have a bipartisan commission recalculate the division of electoral votes. I remember seeing the calculations once, (I don’t have the energy to research this point again) where when you divide California's number of electoral votes by their population, you get the figure of how much of a vote each person represents. And when you divide, say, Wyoming the same way, the voting power of one person in Wyoming is measurably higher than one person in California. So if they redid the whole scale to accurately reflect the distribution of Americans across the country, we might come closer to one person/one vote. Just let it be guided by the math. But again, the Republicans have no incentive to play along. The system serves them just fine the way it is. 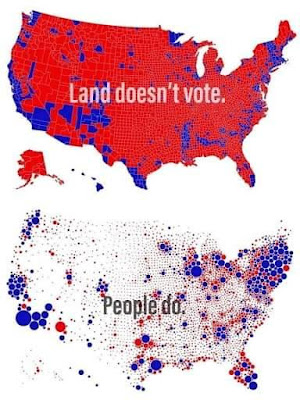 What, you think we can appeal to their sense of fair play? They’re trying to overturn a legitimate election right now. There is no fair play, only the preservation of their own power and advantage.

Maybe at the state level, we can learn some lessons from what’s going on today. States who care about basic fairness should look at the ways Trump’s teams of lawyers are trying to overturn the will of the people. Maybe tighten up some loopholes and simplify the processes, so that a handful of mid-level operatives don’t have it in their power to refuse to certify an election, just because someone badly wants them to. (Or they badly want to themselves.) And maybe establish some legal penalties for having private meetings with one of the presidential candidates who is actively trying to steal the election. They should at least pay for their own Dom Perignon.

And now, a little… 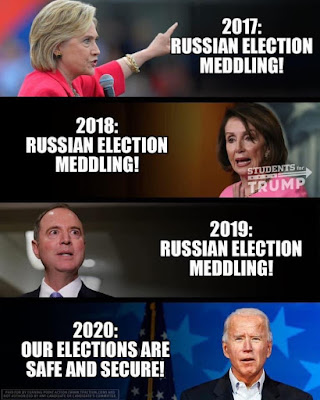 I saw this on Facebook this weekend. As usual, it’s a simple argument that leaves out large swaths of information, which is has to in order to appear to make sense.

First off, in 2017 there was plenty of election meddling because the FBI and every other US intelligence agency said so. It was so apparent that our spooks were surveilling Russian operatives all over the place. You might have heard about it when their taps on the Russians revealed they were speaking with Trump’s campaign staff. It ended up with an impeachment some people were talking about.

lso, the Russian election campaigns were more about spreading disinformation and discord than actual hacking, although there was some of that, too. President Obama wanted to bring it to the public but for reasons that escape me, acquiesced to Mitch McConnell and kept the information limited.

The Russians were behind the WikiLeaks Clinton email dump, which tied the Clinton campaign in knots and doused them with embarrassing news on a daily basis. Again, this was discovered by federal authorities and intelligence agencies, not by members of Congress.

In the intervening years, the nation has learned a lot about how the Russians operate and how they sow distrust in the system. Many states have taken steps to combat attempts to tamper with their election apparatus, although many have not, leaving federal money to do so on the table. (They will deny Russian interference as long as they interfere in Republicans’ favor.) Why would we not learn from past mistakes?

So, yes, there was Russian interference in 2016 elections being called out in 2017, but it was not the kind of interference the Republicans are claiming happened this year, to which they’re trying to make a comparison. It was more to influence, less about hacking or intentionally losing votes.

Any complaints about Russian interference in 2018 and 2019 were still referring to the original cases. We held mid-terms in 2018 and the Democrats swept into the House. There were few elections in 2019, just local stuff, so there’s nothing to holler about there.

That makes the claim in this meme a misdirection. The last election WAS tainted, not only by the bias of the Electoral College but by a sophisticated disinformation campaign run by the Russians, who enjoy having a lap dog for Putin in a place where he can benefit them the most.

This year, they were still at it, and their effect is as yet, unknown. But the physical voting apparatus has shown to be in full working order, despite the desperate claims to the contrary from the loser. They know how hard they’ve been cheating… they can only assume that if they lost, we must have been cheating even harder.

Maybe it’s true, but I doubt it, and here’s why. All these charges they make in public, at press conferences, interviews, and speeches, are never made in court where there are penalties for perjury. They’ll run the bullshit for you and me, but not for the judge. Even the worst of the Trump shysters aren’t willing to go to jail for this asshole.

All we’re seeing are million-dollar charges with two-bit evidence. 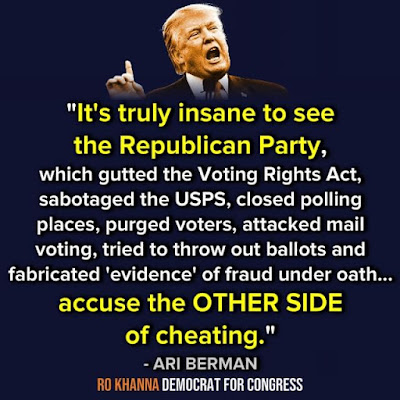 Obviously true. Getting rid of the Electoral College is impossible for the foreseeable future. If we take the Senate, we may be able to mitigate its effects by getting statehood for DC and Puerto Rico, but that's probably the best we can hope for until migration from California finally turns Texas blue. After that happens, no Republican will ever again have any chance of winning.

And even after that, this election showed that we still have some work to do to earn the Latin vote. They're not a given. Trump carried more of their votes than I ever thought possible, considering his ongoing demonization and persecution of immigrants. That tells me the Democratic message isn't as attractive as we think it is.

No, I know this has nothing to do with your post(lol), but I'm stopping by to wish you and Sweet Pea a wonderful and safe Thanksgiving. My meal is already complete and sadly doesn't include cheeseburgers(lol), but once I get done visiting some blogs, I'll be watching movies and reading for the rest of the day. Be well and lots of hugs to you both, RO

Happy Thanksgiving, RO, and thank you for your regular visits and comments.
Sweetpea and I are going to my brother's (who lives nearby) for dinner. (No worries, both families have been tested and are clean from the 'Rona.) Should be a low-risk endeavor.

I'd like to see your thoughts, for or against, on the National Popular Vote Interstate Compact, which pledges state electoral votes to go to whomever hold the most popular votes. It would take effect only when states affecting a majority of electoral votes agree.

There is some debate about whether it would be a violation of the Constitution's compact clause which forbids treaties between states. But if it did pass that test and got enough states to go with it, it would have the same effect as abolition of the electoral system that serves us so poorly now.

For me to agree to that, there would have to be an overwhelming number of states involved. I don't like the idea of having my state go overwhelmingly blue, only to have it cast its electoral votes for the red candidate, solely because that's how the South and Midwest voted.

That said, I support the goal of creating a true one person-one vote decision.