Coming back from (a glorious) vacation, I ran headlong into a bunch of muddleheaded memes that just cry out for a good debunking. Some of them got me pretty cranky. 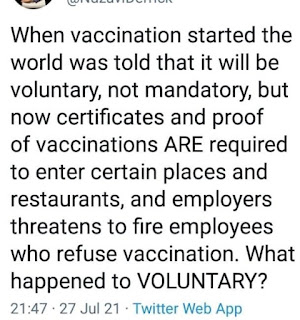 Just who exactly is it that has enough juice to “tell the world” anything? No one country can tell another how to handle an internal medical situation, not even the US. And obviously, no one tells us what to do either, not even our own government. So right off the bat, there’s a big chunk taken out of the foundation.

To continue the demolition of this house of cards, businesses can make their own rules regarding employment policy, especially in the “At Will” states the Republicans seem to love so much. People can be hired and fired for just about anything but “protected” statuses like age, sex, race, etc. There is no universal Know-It-All to tell businesses anything so naturally, their policies will range from wide-open COVID-Fest to requiring shots, masks, and full-body condoms.

Lastly, situations shift and evolve over time. It would be idiotic to require that everything we do to handle COVID be dictated by what we knew back at the beginning. (Like 40% of the population would opt out for specious reasons.) Sometimes things that looked right on one date look ineffective after months of experience, so the directions change. That’s the way it’s supposed to be.

So basically, there’s nothing in this tweet that holds up to the slightest scrutiny. It’s just a series of leading questions intended to deliver the weak-minded into “owning the libs” by infecting themselves and others with a serious disease. 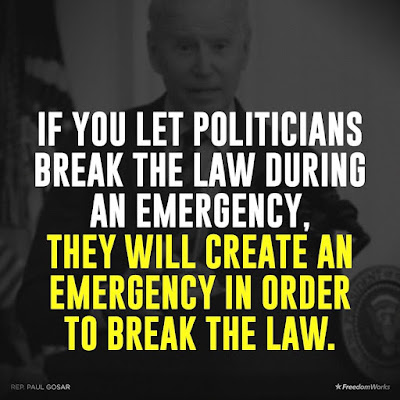 Since there’s a shadowy picture of Joe Biden in the background, (and this came from a conservative FB friend) what law is the President supposed to be breaking (in order to break another one)? Yes, I’m sure the creator of this meme was a constitutional scholar, right Ivan? I guarantee this is nothing but more Fox “News” type assertions meant to damage reputations without a lick of evidence or truthfulness. This is a fishing expedition, meant to stoke the fears of the MAGA base by alleging that one mystery crime has happened and another is on the way.

And since when did the MAGAs decide that a president breaking the law is a problem? The former guy broke loads of them, by enriching himself through taxpayer funding for his hotels and properties (from which he is required to disengage and never did) (no, putting your sons in charge doesn’t count), to withholding approved funds from foreign countries in return for them making up dirt on your political opponent, to strong-arming local election officials into “finding” votes for him or “fraud” to eliminate opposing votes.

But short of that, explain to me what “laws” Biden has broken, or is proposing to break, or sit down and STFU. I’m sure this “law-breaking” is nothing but an unpopular political decision, bent and twisted to look unlawful. 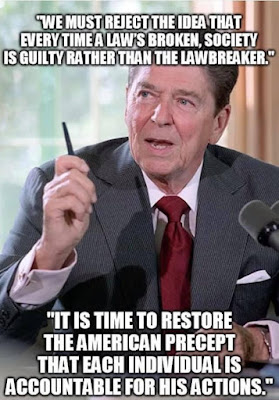 Here we go with St. Ronnie of Hollywood, as someone unearthed a 53-year-old quote about we shouldn’t expand social programs. I’m sure the person who posted this intends it to condemn marches and protests for social justice (in other words, black people “rioting”).

What I want to know is why it’s not applied to the January 6th insurrectionists? I mean, they’re trying to blame BLM, Antifa, the FBI, Nancy Pelosi, and when under extreme duress, (like in court) the former guy. I think these individuals should take a cue from their idol and take a good hearty dose of individual responsibility. Right up the old prison wallet. 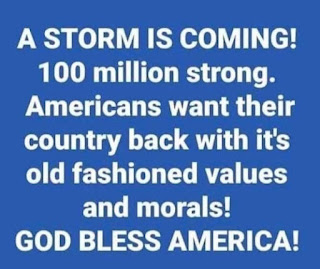 One hundred million strong, huh? I guess 20 million decided to sit out the last election. Pull figures out of your ass much? But more importantly, “fuck you” with your “real American” bullshit, which is really just code for “white Christian.” This country is a collection of mutts from all over the world and always has been.

And what are these “morals” that allow you to look away from the crimes committed by the people on the “Real American” team, like the former guy and the vandals who crawled all over the Capitol building on January 6th?

What you saw last November was a real storm, one that your people are willing to rig elections to keep from happening again. Fuck you with your self-serving, moralizing, white bread bullshit. 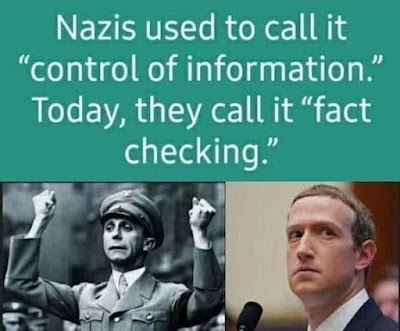 Yes, the people who revere a guy who told over 36,000 documented lies in office want to complain about fact-checking? Look, you want to have free reign to get your message out? Don’t fucking lie. Don’t make up shit out of thin air. Don’t take a single sentence and strip out all the surrounding context to render a thought that’s 180 degrees from the one that was actually expressed.

You’re just mad that you can’t bullshit with impunity anymore, because the top-shelf organizations like Snopes and Politifact do the research that reveals the lies.

The little dig at Zuckerberg/Facebook? You’re just picking at a Band-Aid. They place labels to warn people to look elsewhere for accurate information. And the things they actually delete? Calls to violence, racial slurs, death threats, and stuff like that. That’s the hill you want to battle on, the right to threaten? Go fuck yourself and your candy-ass Nazi references. You’ve got that shit backward… you’re just mad your own attempts to control information are being called out. 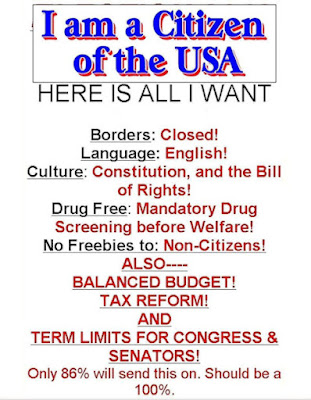 Call this the Racist Manifesto. Almost every statement here has a negative effect on people of color.

Borders: Closed. They don’t even pretend to be non-bigoted by implying they’d be OK with immigrants if they only “came in legally.” Nope, this is just “We don’t want no more brown people in here. It’s a fancier way of saying, “My people got in so now close the door.” I don’t think the writer even knows what “closed borders” means. There go the spring break trips to Cabo.

Language: English. Like this is a real problem. English already is the dominant language, but they’re interested in stamping out the little areas of help that may still be available. How fragile must one’s self-worth be to be so upset by a sign in dual languages, or a 3-second phone prompt? Snowflake…

Culture: Constitution and the Bill of Rights. Documents written by white slave owners, designed to keep the power in the hands of the same. News flash: These documents are not a culture, they’re a set of laws. And even then, everyone knows the “rule of law” applies mostly to minorities. White people with private lawyers slide by with slaps on the wrist while everyone else does time.

Drug-Free: Mandatory drug screening before Welfare. Yay, more hoops to jump through before anyone gets the help they desperately need. Never mind that only a minuscule percentage of Welfare applicants get hung up by failing drug tests. “But it’s one more barrier to people getting something I’m not.” Personally, I’d like to see the corporate board members subject to drug tests every time they get a bailout or use a tax loophole. But no, they just go right to the “Approved” basket and claim their millions.

The “And also” parts are less racist, but still misguided, especially coming from conservatives.

Balanced budgets: Which Republicans only want when Democrats are in charge or want to do something that helps the lower and middle classes. The former guy’s tax cut bill, passed solely by Republicans, killed any hope of balancing the budget without its repeal.

Tax Reform: As mentioned above, Republicans had their chance to reform taxes but chose to lock in tax cuts for the richest Americans. The only tax reform Republicans want to see is reducing the IRS’s capability to enforce tax law.

Term limits: Not even worth discussing because it will never happen. Politicians will never willing to give up the possibility of maintaining power.

I hope you’re not one of them.

Well, I try not to even take any of these Memes seriously at all when Idiots hang on their every Word and circulate them like they are circulating The Rona by not getting Vaccinated too. It's interesting to me tho' how many people will Believe some Meme a Mystery Person created, yet The Truth is so difficult for them to handle or Believe? Low Information is usually received by the likes of this tho' and then they run with it like it came from a reliable Source... and it's hard to even Believe they're Serious about some of the Bullshit yet... here we are!

I would love to not take these things seriously but so many others do, I feel an obligation to society to counter the bullshit, so that maybe others will think twice before buying such weak arguments.

It saddens me that people I consider friends think this stuff is legitimate.