It's on Thee and Not on Me

As the COVID resurgence picks up speed and the CDC updates their recommendations again, the race is on to deflect and reassign blame. Here’s a new one to me: 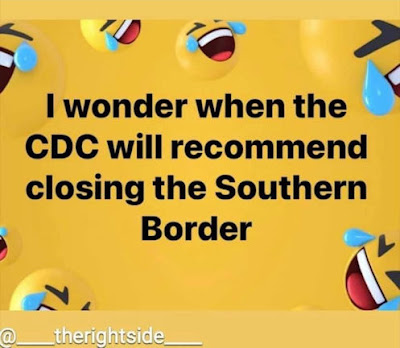 I think closing off a Southern border is a great idea. Here’s where it should be. 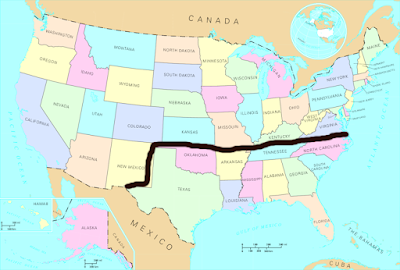 Technically there should be a few northern states blocked off too, but I wanted a nice smooth wall there.

So that’s the new strategy now… it’s the immigrants’ fault, and not all the pinheads who refuse to get vaccinated because they value the “freedom” to spread a contagious and sometimes fatal disease rather than endure a mild inconvenience. Plus they get to “own the libs,” which will be a nice thing to put on their grave markers.

Even though I saw this meme on a conservative friend’s timeline, I wondered if he or anyone really believed it. Then in looking at the comments, I was disturbed to see that they do, with great intensity. Note the following exchange in confronting someone who noted a mild rebuke: 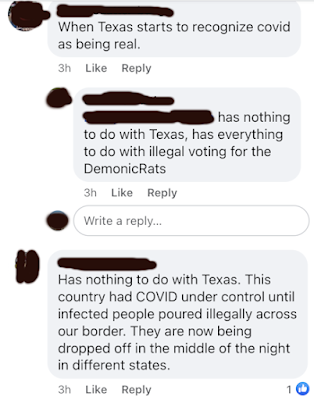 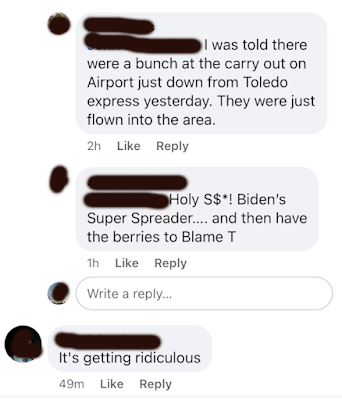 Illegal voting caused the spike in the Rona, huh? I guess there’s a twisted path there… if Biden hadn’t “stolen” the election, he wouldn’t have been in place to demand that the US transport disease-riddled foreigners into the soft, white underbelly of America, to infect all those noble, red-hatted MAGAs. [Massive eye-roll]

I was about to write off to a fever dream the rest of this nonsense about clandestine overnight flights, but then I realized what they were referring to. In order to alleviate the congestion at the border processing centers, they were moving detainees elsewhere for processing. In other words, traffic control. Republicans were complaining about conditions at the border (as soon as their guy was no longer in charge) and now they’re complaining about how it’s being fixed.

Conservative outlets like Judicial Watch are pushing this hard, the way they push all crime stories when they involve minorities. In looking through their site, I didn’t see a single story on white-collar crime of government grift. Just gang members here and shootings over there, a killer who they found was an immigrant, around the corner.

The part that’s missing from this insane narrative is how these detainees, who moved from one controlled facility to another, translate into a massive COVID spread. First of all, it’s a huge assumption that they’re all COVID carriers. I would suspect no one is going anywhere without being cleared via testing. Why? Because the current administration is taking the coronavirus seriously. It was the former guy who was so cavalier about it, even after catching it himself. (And then getting himself and his family vaccinated.)

Secondly, these detainees wouldn’t be interacting with enough people to cause a virus spread like the ones we’re seeing now. What do they think is happening, someone’s sprinkling these people across towns and villages like so much parmesan cheese? Sneaking them into VFW halls after hours?

And lastly, if the MAGAs were vaccinated to the degree that the rational people are, the spread wouldn’t be as serious.

This is all blame deflection, just like it has been from Day One. “It’s not MY fault… blame those foreigners for the ‘China’ virus!”

The other rationale I keep seeing is “medical freedom.” The MAGAs are finally realizing that there’s an argument to be made for bodily autonomy. Unfortunately, they’ll never apply it to women’s reproductive autonomy. As far as I’m concerned, if someone is against the COVID vaccine because it’s a personal medical decision, then they forfeit their right to be anti-choice when it comes to abortion, without being a fucking hypocrite.

They can’t even argue about protecting innocent life if they’re this willing to disregard the innocent lives to whom they transfer the ‘Rona. It’s all about the “me,” not the “we.” They’ll take their rugged individualism right up until they’re taking up time and resources in the ICU.

I think it’s a bunch of these same cement-heads that are raging about Simone Biles now. I don’t know exactly what’s going on with her, but neither do these couch jockeys. It’s not like it’s unprecedented for an expert at something to “forget” how to do it. In baseball alone, I can think of three players who went through mental blocks where they could no longer perform the basics of their jobs.

Two years after starring in the 1971 World Series, former Pirates ace Steve Blass found himself completely unable to throw a strike and ultimately retired early. Cardinal Rick Ankiel had the same problem and had to remake himself into an outfielder. Dodger second baseman Steve Sax all of a sudden couldn’t get the ball to first. They even named it “Steve Sax Syndrome.” So it happens.

With Biles, a momentary lapse in concentration can get her maimed, considering the danger of the tricks she’s attempting. Whether it’s physical or psychological, if someone is unable to do their job to the level of their capability, it behooves them to step aside for someone who can.

Sure, a defensive lineman can force himself to keep playing on a broken ankle or something, but that only means the opposing offensive lineman is going to eat him for lunch. How does that “toughness” help the team?

I give her a ton of credit for doing just that and not trying to “tough it out,” and tanking the US’s team scores in the process. She allowed someone else to step up and compete. I think to do otherwise is just selfishness. And criticizing her for it is even more wrong-headed.

I also suspect that if one of those lithe little blonde gymnasts had the same issue, the criticism wouldn’t be nearly as severe.

It is with great sadness that I learned of the passing of Dusty Hill, bass player for ZZ Top. Their music was a staple of our rave-up “Barn Parties” of the 80s. In fact, the famous song LaGrange almost singlehandedly turned my dad from going “Turn that shit down” to “Hey, turn that up!” (That, and You Shook Me All Night Long.)

When we threw a party, we wore out LaGrange, Tush, Tube Snake Boogie, Pearl Necklace, Gimme All Your Lovin, Sharp Dressed Man, and Legs. All were great for jamming or dancing.

Their live shows were legendary; a tremendous mix of spectacle and boogie. I’ve seen them four times, on consecutive tours from 1983 to 1994. Watching Dusty and guitarist Billy Gibbons fall into perfect unison was to observe two guys who knew what the other guy was going to do before he did, like old masters.

Dusty was by far the better technical singer. He could really belt like he did on Tush, Party on the Patio, Beer Drinkers and Hell Raisers, and I Got the Six (Gimme Your Nine). And his backing vocals really rounded out their sound on the ones Billy sang.

Billy Gibbons said that Dusty would have wanted the show to go on but I don’t know how they’re going to do it without him. Oftentimes, bass players are like tinker toys and can be replaced without anyone seeing or hearing a difference. I don’t think that’s the case here. They may be able to find someone to fill the gap sonically, but it just won’t look like a ZZ Top show without the little bearded guy on the left.

RIP, Dusty Hill. We’re lifting one for ya tonight. 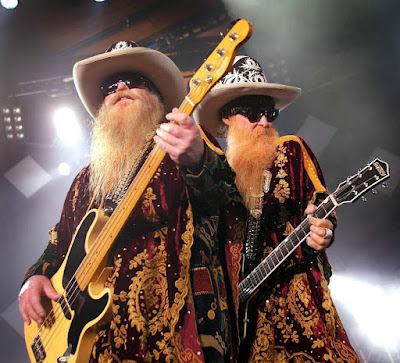 Director’s DVD Commentary: This post was written mid-last week, as I’ll be on vacation all of this week. If any facts or references have become dated in the interim, I offer my apologies. From the beach. With a drink.