I promise, this is the last Barn post for a while.
Most of this post was meant to go in the post I did about The Barn parties, but I cut it for length.  However, I can’t document our Barn experience without addressing the thing that held so much power over us out there… the music.
From the decorations to the atmosphere, The Barn was all about the music.  It was a place where you could turn it up as loud as you wanted without fear of bothering anyone else.  From the quiet nights with just a few people, to the wild Barn Parties, the music played out there was the soundtrack to our lives.
I was always the guy playing the music.  Almost all the albums were mine and every spare cent I had (that didn’t go toward beer) went toward buying more albums.  Needless to say, getting that job at the record store was like hitting the mother lode.
I loved being the one that brought in a new artist.  I’d hear something on the radio or at the store and think, “this would go over in The Barn.”  If I could turn someone on to a new band, I felt like I was doing my job.
One of my all time favorite compliments was when I ran into someone I didn’t really know, a friend of my brother’s or sister’s, but he knew me.  He said, “Yeah, you’re the one that made the music in The Barn.”
OK, I played the records, but I liked the way that sounded.  In a way, I guess I did.
It had its downsides though.  For parties, I was more or less chained to the turntable.  If only we had CDs back then, it would have been so helpful to be able to program at least a couple of songs and walk away.  Instead, I always had to be nearby so I could be there to move the needle to the next song, or change records.  Keeping dead air to an absolute minimum was my quest.  What I wouldn’t have given to have a PC out there and be able to program a whole playlist and let it roll.
There was also the matter of requests.  I tried to accommodate as best I could, but I always felt there should be a kind of sequence.  The songs should move in a particular direction, like you just wouldn’t sandwich an Elton John song in between ZZ Top and the Scorpions.  So I’d try to get particular requests on when they made sense in scope of the whole night.
My brother used to drive me batshit, because he’d request a song, but would be elsewhere when I was able to work it in.  Then next thing you know, he’d be all, “Play Highway to Hell”.
And I’d be “I just did five minutes ago, I’m not playing it again.”  Then we’d yell at each other until one of us would get distracted by beer or a hot chick.
But I really loved pacing the party.  You couldn’t bring out the big guns too early… you kind of had to work up to the party favorites.
The first song was always The Cars, “Let the Good Times Roll.”  We’d bust that out when we tapped the keg before people started showing up (to ensure quality, you see).  I’d let the Cars play, then usually follow it with some Foreigner, Bad Company, Styx, ELO and other middle of the road rock, while I pulled records for the night. 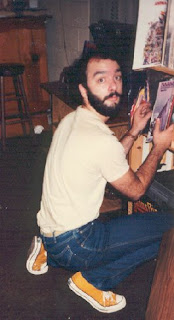 Not just anyone can rock those gold high-tops.
Once people started getting there and getting their drink on, we’d start amping up with some ZZ Top, (LaGrange, everything from Eliminator) Judas Priest (Another Thing Coming), Nazareth (Hair of the Dog), Meat Loaf (Bat Out of Hell and Paradise), George Thorogood (Bad to the Bone) J. Geils (Flamethrower, Whammer Jammer, Come Back), Boston (entire first album) and Van Halen (Panama, Hot for Teacher, Pretty Woman).  Remember, this was long before popular music went R&B.  Michael Jackson and Prince hadn’t yet integrated MTV and rock & roll ruled in our neck of the woods.  Occasionally we’d jam on some Commodores (Brick House & Machine Gun) or Jacksons (Shake your Body) or KC & the Sunshine Band.  The Animal House version of “Shout” always brought down the house.
I was really into Southern Rock back then, so we always rocked the Lynyrd Skynyrd, Molly Hatchet, .38 Special, the Outlaws, Charlie Daniels Band and Blackfoot.
Air Bands were a big deal at the time.  They even had a TV show for it, I think it was called “Putting on the Hits”. (Sorry, I can’t confirm on Google.)  Man, I used to practice my air guitar parts all the time, listening intently for clues in the music, studying pictures on the album covers that would suggest certain moves.  (Remember, most of this was pre-MTV.  You didn’t know what a band looked like playing unless you saw them in concert.  Or lip-synching on Mike Douglas.)
We actually had a little in-house air band, my buddies and I.  We called ourselves “Smelo”, because we used to mostly do ELO songs.  (I was on air violin, as if a real violin wouldn’t be nerdy enough.)  We really pretty good, if you consider sticking to your own instrument “pretty good.”  One of my buddies went as far as to draw up a number of album covers for us, which I still have but am too lazy to dig them out and scan them right now.
But I liked to branch out, like my own One Man Air Band.  I’d do different instruments for different songs.
That’s where the Southern Rock songs were so handy… they always had these great solos.  If I were ever granted a wish that I could play the guitar one time on just one song, it would be Blackfoot’s Highway Song.  The guitar solo that makes up the back half of that song is just sheer joy to me.
On occasion, we'd do a little dancing, too.  My buddy John and our neighbor Margaret used to do this great swing dance to Aerosmith's Big Ten Inch Record. 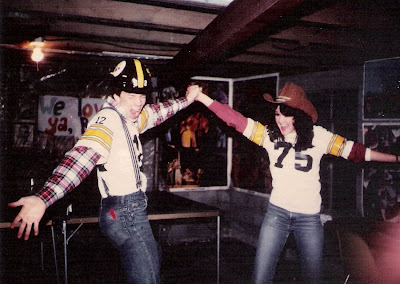 I always had to be careful about any dancing I did because those I-beams bracing the ceiling were a little too low for my liking.  Every so often, I'd get too high on my toes and KLONG my skull into one of those beams, which would drop me like a ton of bricks.  Perhaps this explains a lot...
Anyway, when the party hit critical mass, it was time to break out the AC/DC.  The volume was deafening, the dance floor throbbing, and air guitarists going all Angus Young all over the place.
This part of the party probably messed me up more than the beer.  If you’ve ever seen Angus Young, the guitarist for AC/DC play, you know what I mean.  Guy looks like a coked up rooster and the poster boy for Ritalin.  I’d wake up the next morning and my neck would be all messed up, my back would hurt… And I must have looked like a complete bozo… I mean, Angus is 5’2” and wears an English schoolboy uniform. I was about 6’3” and bearded.  But I just felt it and channeled him the best I could.  And hey, I wasn’t the ONLY one jamming out there.
This is one area where I’m glad there were no digital video cameras around.
You could only ride that peak for so long though.  After enough hard stuff, I’d back it down a bit, usually for some good old-fashioned sing-alongs.  The Beach Boys were always fun, because of the many distinct high and low parts, and the words were easy.  Bob Seger’s Turn the Page was always good for a bunch of us standing around the bar, arms on each other’s shoulders.  We always followed that one up with this single by Mac Davis.  Don’t laugh… He had this song called The Beer Drinking Song.  It was funny and topical (for the time) and sounded just like Hard to be Humble.
Chorus:
“OOOOOOOO…Why don’t we all just get stoned?
Get drunk and sing beer drinkin’ songs?
Between Brezneyv and Begin,
Khomeini and Reagan,
We might as well all just get stoooooooned.”
One of the verses:
“The Russians don’t like us and we don’t like them.
The Israelis hate the A-rabs.
Iran and Iraq are on each other’s back,
And El Salvador’s still up for grabs.
I wish they’d take Idi Amin and Khomeini
And Khaddafi and all of the rest,
Tie’em all to a chair,
And make’em stare at Yassar Arafat,
Till he uglied the whole bunch to death…
OOOOOOOO…”
Anyway, it was great for singing.  And after that, we’d crank it back up and start rocking it again until everyone got partied out.  Or the beer ran out. 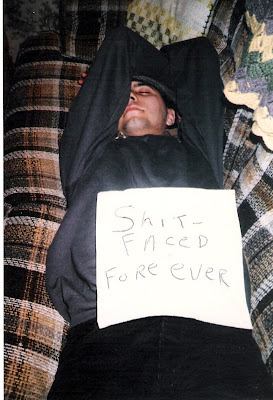 Lastly, we'd make sure we documented whenever anyone dared to pass out before the party was officially over.  You wouldn't believe how many repeat offenders there were... This was probably the 19th time we stuck a sign on my buddy Bill.
Oh, and before you call me an insensitive prick, that's my dad's handwriting!
Posted by bluzdude at 8:29 PM