The Cruelty is Still the Point

Now that the Law of the Land is expected to be lacking Roe v Wade, the race is on to see who can dance on its grave the hardest. The Governors of both Nebraska (Pete Ricketts) and Oklahoma (Kevin Stitt) have just been quoted as insisting there will be no exception for victims of rape or incest. 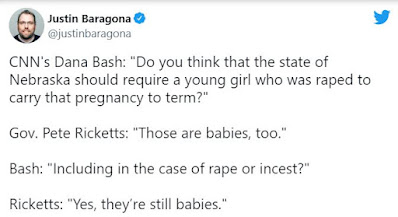 I’m dying for an interviewer, one day, to reply, “How in the hell are these “babies?” They’re not babies, they’re thumb-tip-size blobs of cellular material that you’re giving more rights than the sentient being who’s carrying it in her body, all because your personal strain of magical thinking says so. Why do your values take precedent over those of the people involved?”

That’s really the nut of the question. “Why is your moral stance more important than that of the woman carrying the baby?” And if they try to answer about the sanctity of innocent life, then ask “Then why do you reject every program established to help this sacred life once it passes through the birth canal?

Governor Stitt is making similar claims like it’s a race to see who the biggest unborn baby-lover is and who can put the cruelest vise around the Libs?

“That is a human being inside the womb. And we’re going to do everything we can to protect life and love both the mother and the child. And we don’t think that killing one to protect another is the right thing to do either.”

There it is. A grownup woman will be sacrificed before being allowed to have a simple medical procedure, to protect the potential of human life. And it’s because of the morals of a bunch of strangers in elected office and not the person to which this is happening. This is a message to women across the country and the world: “You are nothing but a bunch of cattle to us, cows who are only here to be incubators.  My friends and I can tell you what to do with your body and there’s nothing you can do about it. But we’ll tell you what, you don’t have to be immunized. You’re free to infect whoever you want with a serious virus.”

Both of these practiced politicians are doing that thing I mentioned in last week’s post, assuming facts not in evidence. They just breeze on about “babies” as if it’s a foregone conclusion that these intersecting cells count as sentient human beings. It’s that imagery that they want everyone to have in their head, to help sell their point. Like in this headline I saw this morning:

See? The Slaughter of Babies! Those commie liberals want to slaughter cute little, chubby-cheeked, toe-grabbing babies. They want their opponents to seem barbaric, like the kind of people who support slaughtering babies and bathing in their blood in the basement of pizza shops across the country. And they skip right by the part where 98.5% of abortions happen long before the fetus resembles anything close to an actual baby.

That 1.5%, that’s where they want to live, which is even more grotesque because the poor souls who are having those late-term abortions desperately want to have the baby, but can’t due to medical problems beyond their control. It’s a tragedy, now with the added insult and injury of the state demanding they have the baby anyway, even if the baby can’t survive. Even if the baby is already dead. Even if the delivery or continued pregnancy kills the mother. How can this be tolerated in a "free" country?

What kind of ghouls are we in this country to allow this to happen? How is this forced application of a religious stance not in violation of the First Amendment? Republicans are racing to see who can turn the United States into an Evangelical Christian version of Iran, only with less of a warm and fuzzy image.

There’s only one realistic way to change any of this. The Court is not going to change, not without a filibuster-proof Senate in place. While that may be possible, it will take quite a while. At best, a simple majority will keep the Republicans from enacting a federal abortion ban. Meanwhile, SCOTUS is kicking it all back to the states, and that’s where the action will have to happen.

We need to elect people to state governments who will not support designating women as second-class citizens. We need Governors, state Senators, Assemblymen, Representatives, (or whatever is applicable to your state) who support the right to self-autonomy, period. Republicans have made themselves one-issue voters over abortion, I say we do so too. Because abortion is only the first domino. This isn’t “slippery slope” bullshit here. Various Republicans have already been quoted as wanting to go after gay marriage, inter-racial marriage, and contraception. If we are to have any illusions that we’re a “free country,” we must ensure that we have the individual freedom of bodily autonomy, and absolute privacy regarding what goes on in the bedroom, or any other room of our own houses.*

*As long as no one is getting hurt, obviously.

We have to be louder than they are. We have to outnumber them at the polls. We have to impose the will of the many over that of the few. And before anyone says, “Isn’t imposing one group's will on another group what you're fighting right now?” no, the liberal proposal is that we do what is morally right for ourselves, rather than forcing a particular action on other people. That’s the big difference. That’s why we’re right and they’re wrong.

They get to act in whatever way they're guided. But they can’t implement their bizarre fetus-worship on unwilling participants. This has life and death consequences, for real, loving, feeling, fearing, people. Or in other words, broodmares, as far as Republicans are concerned. 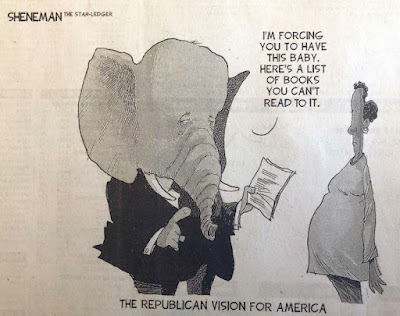 This controversy highlights the hypocrisy of the conservative “Freedom’ bullshit. To Republicans, we’re free to have as many guns as we want, but not to control the fate of our own bodies. We’re free to eschew proven (and free) medical care so we may infect others as we go about our daily business. The government can force women to face death over an ectopic pregnancy, but can’t force someone to wear a paper mask in public.

America the free? Hah. Republicans have made it clear that they want a country where we’re only free to be Republican. Anyone who objects to that is clearly sub-human, so who cares what they think anyway? 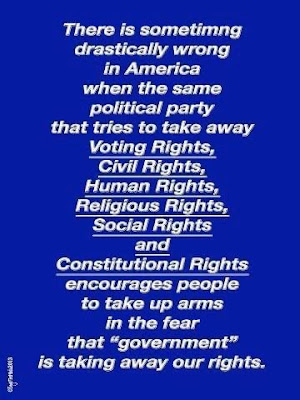 We have to vote these motherfuckers out of office, from town to state to Washington DC. Because if we don’t, this once-great nation continues the spiral right down the tubes, straight into a more powerful emulation of the countries we currently oppose.

The fuckery continues and that side is no longer a Political Party, it is a Domestic Terrorist Organization and should be treated as such... Treason used to be punishable by Death, perhaps that should be brought back too if we're gonna devolve any further instead of evolve as a Nation. And the Lunatic Fringe is now indoctrinating their Young People to be so radicalized that they're taking Assault Weapons and indiscriminately murdering innocent people who THEY deem not 'acceptable' American Citizens! They're coming for Women right now, but they'll be coming for ever so much more and we all know it! They aren't even pretending they're not anymore.

The big problem there is "Who gets to decide what treason is?" Because I've already heard RWNJs demanding that Dr. Fauci be put to death, you know, for trying to prevent a fatal virus from running rampant, thus reducing "freedom".

They make up their definitions and skew them using their Alternate Reality scam they've convinced their Base the Illusion of. Their Freedoms to not wear a Mark or get a Vaccine during a Deadly Pandemic were compromised so Fauci must pay an ultimate price for their ignorance and Gene Pool being thinned when they were so Free to be Stupid... gotta blame someone when their ill thought out Plans backfire. When all these unwanted Children are actually Born, and the Kiddos, their Families and Mothers require Paid For Services that the Right don't wanna Pay for, they will holler loudly about the Victims of their decisions about Abortions being the Problem then. I can't get Services now for Children already Born and hear it all the time from Right Wingers about how those requiring aide are the Villains and 'replacing' them... yet, oddly they want more of us apparently... see... you can't Win for Losing with those Lunatics. Sorry... I know I'm preaching to the choir, but it all is such Lunacy! They've infiltrated so deep now that I don't know there is a Solution anymore and our Nation is in deep trouble.

Republican politicians love campaigning against Roe because it costs their donors nothing. They're happy to use the issue to drum up support from the True Believers, so that while they're in office, they can go about their Prime Directive of lowering taxes, removing costly regulations, and generally mowing down any obstacles to higher corporate profits. You think Mitch McConnell really cares about fetuses? He cares about the sanctity of the 1% running the country.

But now, we've got some True Believers in higher office, like the former VP and several Supremes, and now they're bring home the bacon. The inmates are taking over the asylum and the whole country is going down with them.