In September, I started to chronicle my life in retail.  You can see by this being “Part 10,” that I've had a lot to tell.  If you’re new to this series, you should start with Part 1.  Otherwise, you can join our hero as he tries to regroup after facing the biggest setback of his professional career… getting laid off.

Losing my job with the record company was a devastating blow.  I even never considered that I wouldn't be with this company for my entire life, especially after all I’d put into it.  It was probably the second lowest point of my entire life.  (I wrote about the lowest point a couple years ago.)

Now, my top priority was to find another office job, preferably within the music business.  I still had a number of contacts, so I began my job search fairly optimistically.  My first order of business was to retrieve evidence of my skills and general.

I went in on Saturday to clean out my desk.  I was there for about 15 minutes before our top Loss Prevention Officer, whom I’d known and worked with for the previous nine years, came in to monitor what I was doing.

Besides collecting the things I’d brought in with me, I was hoping to take some documents that showed my work.  Unfortunately, the LP guy had other ideas and kiboshed it… something about “proprietary information.”

I was pretty disappointed.  It wasn't like I wanted to sell our secrets to the competitor; I just wanted to show what I’d been doing for the last few years.  I tried to explain that I just wanted to get new job, but he was unmoved.  In retrospect, I can’t say that I blame him.  I should have offered to scrub the real data out of the documents, but I wasn't thinking all that clearly and was under a great deal of duress.  Luckily, I had brought home my Rolodex cards on the day I was canned. 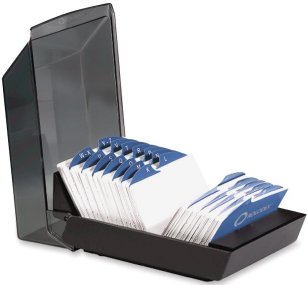 Kids, this is a Rolodex.  Back in the Olden Days, it’s where you kept all your phone numbers and business cards.

As I went through my contacts list, I quickly realized that they weren't going to do me nearly as much good as I’d hoped.  The reason for that was that none of my business contacts were located in my area and I was newly married to someone who’d worked 20 years for with the State of New York.

If I was single, I could have gotten a job with any of the One Stops I worked with, in Miami, Chicago, Cincinnati, or Baltimore.  Hell, I even had a firm job offer from a former co-worker of mine, who worked for a record distributor in Sacramento.  But I couldn't pursue any of them because the wife wasn't going anywhere.  That long tenure with the state meant a major pension and damn-near eternal job stability.

One of my label salesman friends said he could get me a job as a “rack jobber.”  That’s a guy that goes store-to-store setting up and maintaining product displays for a vendor.  That might have been worth a look, but the territory spanned all across upstate New York.  I’d basically be living on the road and that didn't appeal to me (or the wife).  Bottom line, I’d have to look locally.

The bad news was that my old company was the biggest fish in town and there weren't many other music industry businesses around.  There was a One Stop in town, and I did a good friend that worked there, but my company had never done business with them.  There was some kind of situation between the two CEOs.  I got an interview, but despite the recommendation of my friend, and despite my playing on their softball team, I never got another sniff.  The odds of my landing another office job seemed pretty much nil.

The wife wanted me to go back to school and study for a specific trade, like becoming a pharmacist’s assistant (her dad was a pharmacist) or an occupational therapist, (who she licensed with the State).  She even said she’d pay for my schooling, but I had no interest in doing either of those things.  I said without a burning interest in a particular career, I couldn't let her spend that kind of money on me.  (I thought I was doing her a favor, nevertheless she held that against me for the rest of our time together.)

Unable to land a new office job, I started looking for a decent retail job.  I found that my old company’s top competitor was opening a “Big Box” store in town, so I applied there.  The basis for this store was simple: it was to be a combination of 4 distinct stores under one roof.  It would contain a huge record store, akin to the Virgin Superstores, a large bookstore, akin to a Borders or Barnes and Nobel, and giant sell-through movie and computer software departments.  They had a snack area and a common spot where authors could do readings and bands could perform.

They had just opened when I applied to manage their record department.  (And yes, I still call it a “record” department, even though there were no LPs.  They sold CDs, cassettes, various accessories, sheet music, and the like.)  They hired me almost instantly and once I dug in, I could see why.  No one there knew what the hell they were doing.  There was no one on staff with any record business background at all.

I had to go in there, relay the store (alphabetizing was only an afterthought there), clean out the back room and train the staff.  I dug into my contact list and got the store on the list to receive promotional CDs and posters, and had some of my old salesman pals come by to help us out.

They saw the value I brought to the table, so a month or two later, when work was to begin on opening a second location, they asked me to transfer over and manage the record department over there.

I jumped at the chance.  They did things the hard way at the first store and it took considerable time and effort to get things fixed.  At the new store, I’d be able to see that things got done right from the outset.  We had a large pool of temp employees to do the opening set up, from whom I was able to pick the ones I wanted to stay on in my department.  This way, I got to train them properly from day one, on how I wanted things done.  Life is so much easier when you don’t have to make people unlearn bad habits from an earlier time.

The opening went well.  I had a steady stream of promo stuff coming in, so that we needn't open as much live product to play, and I also had lines out to invite bands to come and play.  I had good people working for me and aside from a little sniping from the book department nerds about our music; things went along just fine.  Their goal for my department was to make up 40% of the store’s overall sales.  I was making 45% (and yes, I always knew my numbers).

After opening in the fall, we conducted our first physical inventory in May.  That’s when you have a service come in overnight and do a count of everything in the store.  These can be fairly chaotic, especially if you’re not well organized.  I was there long into the night, answering questions and making sure everything got tallied.

I was pretty happy when I came in to work the next day.  As I was setting up for the day, the manager asked me to come with her in to see the DM.  I figured they wanted to say thank you for such a smooth inventory.  Instead, I got laid off again.

I should have seen it coming earlier in the week, when the DM asked me to write down all my label contacts for him.  Motherfucker…  Stupid me, I did it happily, eager to show off the depth of my network.  (The next week, I called everyone on it to tell them I wasn't there any more, so don’t do them any favors on my account.)

Again, because of an overall downturn in business, they were cutting salaries and revamping the entire management structure.  I had driven a pretty hard bargain when they first hired me so I’m sure I looked like a good target.  Perhaps I made things look so easy, they thought anyone could run the music department.  They also let a couple other people go, including the personnel manager.  .

It was one year, almost to the day, from when I’d gotten the ax from my previous job.  This time around, I wasn't shocked as much as I was pissed off.  When the DM stuck out his hand and offered me “good luck,” I told him to “get bent,” turned on my heel and worked out.  As I left with the manager, she said, “I guess this means those bands won’t be playing here.”

Yeah, that was a pretty good bet.  I felt bad for her… I could see by the look on her face, throughout the ordeal, that this wasn't her idea.  We always got on well.  But I think she liked my scene with the DM, because word of it leaked out.  (I’m pretty sure the DM didn't say anything.)  I was at a hockey game once, and ran into a couple of people that worked for me there, and the first thing they said was, “Did you really tell the DM to get bent?”

Fuck yeah I did.  I went out like a mouse the first time; I wasn't going to do it a second time.  But here I was again, jobless and on the outside looking in.

Coming next: Starting over again…
Posted by bluzdude at 2:01 PM

Email ThisBlogThis!Share to TwitterShare to FacebookShare to Pinterest
Labels: Bluz LIfe, Bluz Music, Things That Piss Me Off