Pinky and I went to see the Orioles game Tuesday night.  She’s usually good for one or two games a year, and with the Pirates game we saw in Pittsburgh, this made two.  Because it was a special occasion, and I had a $10 off deal in hand, as a thank you for voting for Orioles in the All Star game, I figured I’d get some better seats than I usually do.

We ended up in the 2nd row, club section, not far behind 1st base.  The view was pretty darned nice. 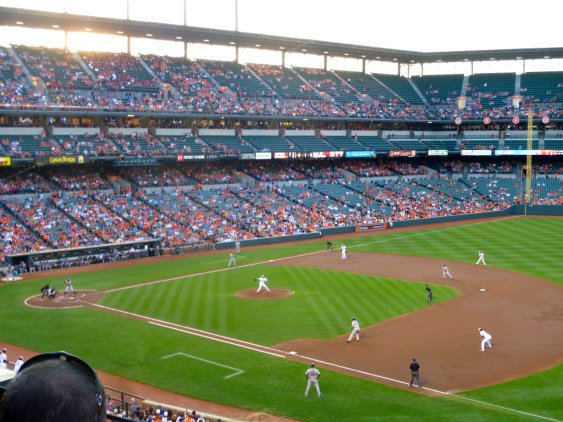 I love club level… it gets you up a bit, for added perspective, but not a mile away in the upper deck.

The game was pretty good; the Orioles were down to the Astros 3-0 but came back to win 4-3, taking the lead on a Chris Davis 2-run home run.  Leading the league in homers, Davis hadn’t hit one since the All Star break.

But the big news for me is that one of the Astros stole home.  I mean, how often does that happen?  And it was a clean steal, not as a result of a wild pitch, double-steal or botched squeeze play.  He just flat-out caught the O’s pitcher (and catcher) napping.

The pitcher, being a lefty, has his back to the runner and is watching the other runner on first.  Then he looks down.  Meanwhile the guy on 3rd is easing up the line and then just takes off.  He’s a couple steps from the batter’s box before the pitcher even notices him.  Even the catcher is still crouched back behind the plate.

You can see the video right here:

Luckily for the O’s, it didn’t cost them the game, but holy crap!  I so was excited that I was there to see someone steal home!  So when opening the Baltimore Sun this morning, I was interested in seeing what they had to say about this amazing feat.

Here’s what they said… practically nothing!  I couldn’t believe it.  I had to reread the game story a couple of times before I finally found this reference:

“(The pitcher) won despite falling behind 3-0 in ugly fashion when Astros shortstop Jonathan Villar stole home to cap a three-run third inning.”

That’s the whole thing.  Sure, they went on for nine paragraphs about Chris Davis busting out of his home run slump, but barely a whiff of their opponent stealing home.

This exemplifies one of the things I truly hate about this area: homerism to the point of turning a blind eye to even the most noteworthy feats of their opponents.  I don’t know where the blame lies in these chicken or egg cases, with fans who don’t want to be reminded of their teams’ failures, or the media who is afraid to cross them.

It’s the fuckin’ news!  They are supposed to report and analyze what happens, not shield it from the city’s poor, sensitive egos.  At minimum, I expect then to ask the principals what the hell was going on?  Why did the pitcher never look over at third?  How come the catcher never came out from behind the plate to take the throw (which bounced off the back of the runner’s head)?  How come no one hollered (in time) that the runner was coming?

Stealing home is something that rarely happens.  I’ve been to over 100 games and have never seen that before.  Hell, I’ve probably watched thousands on TV, and I’ve seen grand slams and triple plays, but I never saw a steal of home during a game.  (I’ve seen an occasional highlight, from time to time.)  I think it’s completely irresponsible to neglect coverage of so rare a play, just because the home team was on the downside of it.

I’ve mentioned this in the past, mostly as it relates to how the media handles their Ratbird coverage, but this is the best example yet.  I went to bed right after we got home last night, so I never saw how the local sportscast handled it.  If they covered it, it’s probably because the video is pretty amazing.

Luckily, the play was all over my Yahoo home page, and other non-Baltimore news sites.  I wondered how often the stealing of home occurs, so I found a site that analyzed some stats on it.  The guy looked at the first half of the 2012 season and found that there were three successful straight steals of home during that period.  It was funny, because according to the official scorekeeping, there were 36, but the author whittled most of them out as being flukes, or by-products of other activities (like the aforementioned wild pitches, double-steals and squeeze plays).  In only three, did the guy just outright swipe the base and score.

The Astros may be the worst team in baseball, based on won/lost record, but they have some serious balls.  I have to hand it to them.  It takes a lot of guts to green-light a guy to steal home.

It’s just too bad that no one at the Baltimore Sun thought it was important enough to talk about.
Posted by bluzdude at 12:00 PM

Email ThisBlogThis!Share to TwitterShare to FacebookShare to Pinterest
Labels: Baltimore Orioles, Bullshit, News Bluz, Things That Piss Me Off

Sounds like an exciting game. I love Camden Yards!

Well, those were the highlights… otherwise, the O’s only managed 3 hits all game long. It’s amazing they even won. (Houston walked a bunch of guys.)

I love going to The Yard as well. It’s a nice thing to have in my back yard, so to speak. In fact, I’m heading there again on Saturday.

A straight steal of home? Dude, that's awesome! Who cares if it was the visiting team? I've seen fans give an opposing pitcher a standing ovation if they're throwing a no-hitter. Sometimes you just have to tip your cap and enjoy history. I would have cheered for Villar after that. Why not? it's not like they're arch rivals in the heat of pennant race.

Hometown newspapers are horribly biased. As a Red Sox fan in Yankees country I notice it all the time - they take quotes and events completely out of context, so that their guys look good and our guys look like incompetent jerks. There's one guy who has to be 100 years old who writes about the glory days of NYC baseball, and in comparing the classy and humble Joe DiMaggio to the surly and cantankerous Ted Williams, this writer implied that Ted was an arrogant jerk who never did anything selfless, ever. I guess Sid Dorkman must have conveniently forgotten WWII. And the Jimmy Fund.

I guess that's why there's Yahoo, ESPN, and other (usually) unbiased news outlets - for those of us who are smart enough to cut through the bias and fidn the real story.

I'll definitely applaud the opponent if they do something really amazing. You gotta recognize a good play, whoever it's for. I just wish the local media would do the same, and give credit where credit is due, rather than just appease the homers.

Thank goodness the local paper is not my only option.