I love binge-watching TV series from DVDs… It can either be a show I’ve never seen, or a replay of shows I’ve loved from Back in the Day.  A couple weeks ago, I was re-watching Dexter, seasons three and four.  (Poor Rita…)

But when I was picking up my Dexters at the store, I spotted another video collection from my younger years. It was a show I never missed, and enjoyed well through syndication. 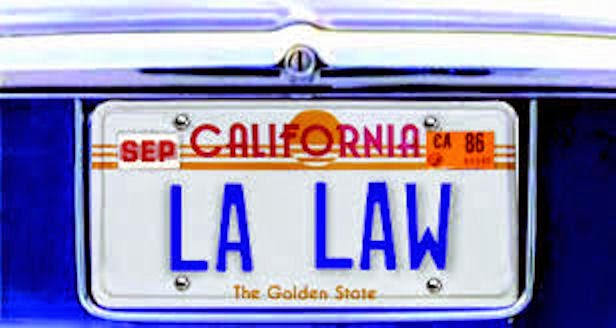 I’m pretty sure I started watching it during its first season; I may have missed the first couple episodes.  But I didn’t miss much after that, even if I had to set up the VCR timer to tape it while I was out.

But here were all these gorgeous people, wearing amazing clothes. 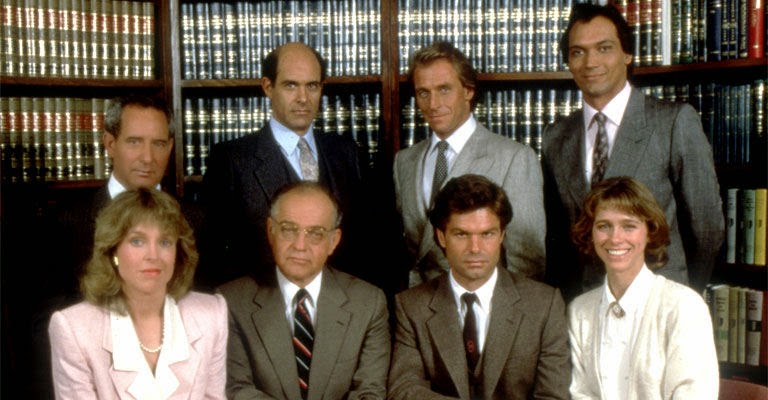 Well, they seemed amazing to me at the time, and miles away from anything I’d ever worn.  But it’s funny how time changes perceptions.  For men, a nice suit is still a nice suit, but the women’s clothes were definitely something out of a time capsule.  Apparently in the 80s, all the women were supposed to look like linebackers.  With the shoulder pads they were wearing, they could barely fit through a doorway.

Much like today, I totally watched shows for the babes.  Jill Eikenberry’s character, Ann Kelsey, was smokin’ hot, and in Season 1, she started dating Michael Tucker’s character, Stewart Markowitz. 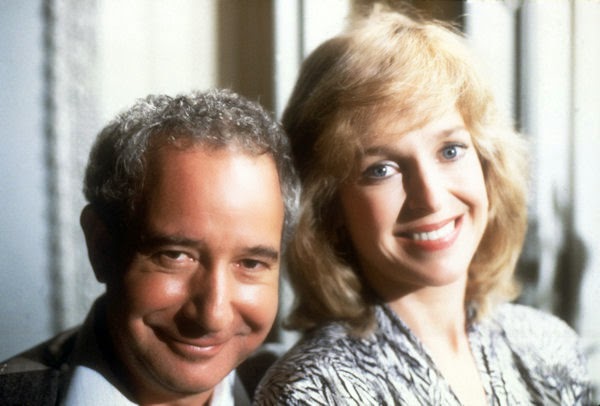 This was the most unlikely couple of all time, and the only reason it worked was because Tucker and Eikenberry were married in real life.  Otherwise, no one would ever believe that the tall, gorgeous power attorney would marry the short goofy-looking tax guy.

I loved their onscreen relationship story because it gave me hope that maybe a retail schlub like me could land the hot chick.  (I eventually realized that life does not work like a network drama.)

But there was one clear reason why I even started watching LA Law. 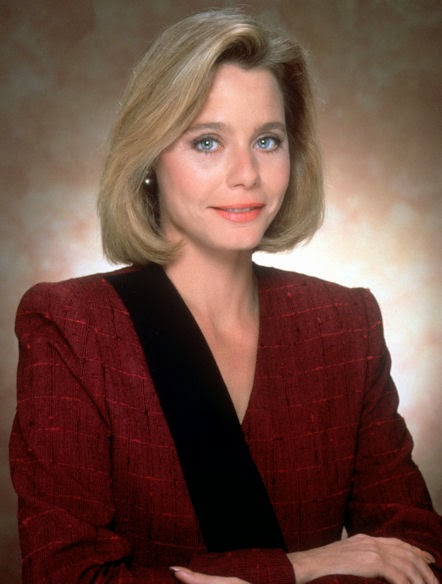 Holy hell, Laurie Partridge was in it, and she was all grown up!  I had a massive crush on Susan Dey, so I was always especially interested in her story lines, be it as district attorney Grace Van Owen, or her romance with Harry Hamlin’s Michael Kuzac. 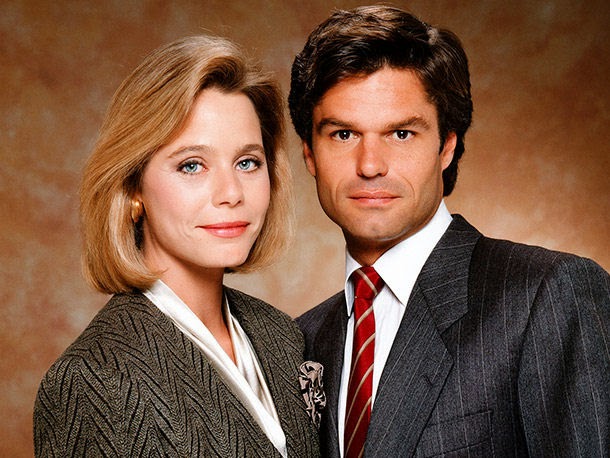 No couple should be allowed to be this attractive.

It was weird when I first started re-watching the first season.  The biggest thing that hit me was how “primitive” the tech was at that time.  In 1986, there were a few “car phones” out there, but they were the size of bricks, and had to stay plugged into the car.

In looking through the law offices, there were no computer terminals on anyone’s desks; they all had typewriters.  During one episode, a local nerd tried to impress a secretary by putting multiple lines on her phone, and setting up a fax machine.

The pricing cracked me up too.  First of all, one of the attorneys went to look at a beach house… I mean, floor to ceiling glass walls, smack-dab on the beach.  The cost was around a million dollars.

Fuck, you can barely get a dump around there now for a million dollars!

And the salaries… the featured law firm started out their associates at $52,500.  (They brought in a hotshot fresh out of law school for $72,500, which made waves.)  Now granted, I would have killed to make that kind of dough in 1986, but I was just a kid in a store. I wasn’t a freakin’ lawyer in LA.

I was just happy not to be making minimum wage, which they happened to mention was $3.35.

Anyway, I spent the weekend binge-watching the second season, and this time, jotted down a few “time capsule” observations.

(I’m only 8 episodes in, and I was going to wait and do a post after I finish the season, but that would only help me next week.  I needed a topic tonight!)

* Outfits… a woman is wearing a blue, skin-tight leather body suit and the camera zooms in close as she pulls a long unzip, for (hound-dog divorce attorney) Arnie Becker.

* In 1987, guys still had chest hair. They didn’t look like boy-band refugees.

* They showed Stewart Markowitz reading a report of computer “green-bar” paper. Man, I hated that stuff…

* (Secretary) Roxanne Melman had a hardback dictionary and thesaurus on her desk.

* I miss being able to slam a phone down when I’m pissed.

* An episode featured Stewart pushing the pace of his relationship with Ann, to the point of their needing therapy.  He eventually said that he couldn’t believe he could really land such a high-quality woman that wasn’t after him for his money. (He had lots of it.)  So he expended a lot of effort to seal the deal as soon as possible, so she couldn’t get away.

It was then I realized that I was Stewart Markowitz, albeit without the money.  No wonder I liked his character so much.

* Quote: “If we did that, gas would cost three bucks a gallon, and no one would stand for that!”  I almost had a spit-take.

* One of the cases was a lawsuit against a big tobacco company, which was widely described as “unwinnable.”  I’m glad that we eventually won that one, in real life.

* So far I’ve seen two visual references to oral sex, probably the first time on TV. One scene featured a bailiff under the judge’s desk, with nothing but her shoes sticking out.  In another, Mike and Gracie are making out in her office, and he just slides down out of frame, while she stands there and gasps.

I remember seeing stuff like that the first time, going, “I can’t believe they just did that… on national television… during prime time!"  Of course, by today’s standards… meh!

* In the mid-80s, there was little “political correctness.”  In fact, when they wrote Benny Stolwicz character, he was frequently described as “mentally retarded.”  There was no judgment involved; but I had to cringe when Arnie Becker told his secretary, Roxanne, that Benny could be hired, by saying, “It’s a go on your retardo.”

* They were all “secretaries,” and not “administrative assistants.”

* In watching so many episodes back to back, I could really appreciate how they stretched out a story line.  Back then, most shows introduced the plot and a complication, and then it was wrapped up within the hour.

On LA Law, they would take several episodes to introduce little tidbits which wouldn’t develop into a full-scale plot point until much later.  And with a 22-episode season, they could really cover a lot of ground, in depth.

The other thing I liked was that unlike most other legal dramas of the past, the home team didn’t always win. And sometimes when they did, they still lost due to unforeseen consequences.

Anyway, I’m having a ball diving back into the 80s. After this, I have Season 3 on deck. Not sure how much further into the catalog I’ll go, but it’s been fun so far.

Maybe next I should go dig up Married With Children…
Posted by bluzdude at 8:22 PM