Last week, I showed you a full-size picture of this year’s Christmas tree.  Today, I want to give you a closer look.

I’ve written before about my parent’s tradition for us kids, that every year since we were toddlers, they got us a special ornament.  Those were the ones we’d put on the tree ourselves, and pack up afterward.  And then when we grew up and moved out, we’d have ourselves our special ornaments for our new places and new lives.  And as it turns out, we’re still getting ornaments every year.  Never gets old, though.

That’s why I’ll never have a “theme” tree… I have too many disparate ornaments to support a unifying theme, and I have no intention of getting rid of any of them. (And no, I’m not putting up a second tree.)

So while I don’t have the theme tree, there are a couple of sub-themes, the most prominent of which are birds.  I have a LOT of bird ornaments.  I mean, what better than birds to display in trees?  And I tend to group them together. 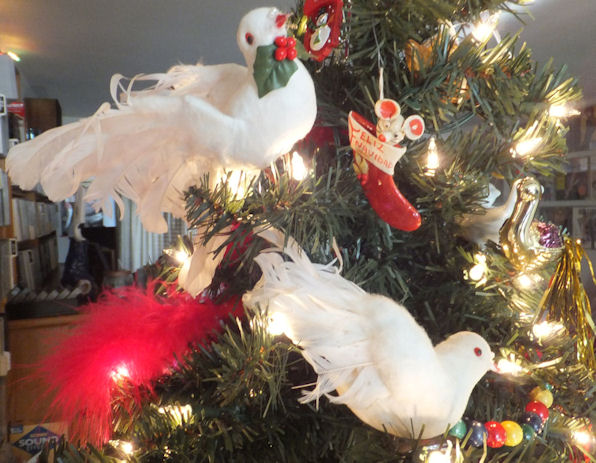 These are a couple with real feathers, which clip onto the branches.  Back when I was married, the tail feather on the red one drove the cat crazy.  We couldn’t keep in on the tree, or else he’d be up there going after it. 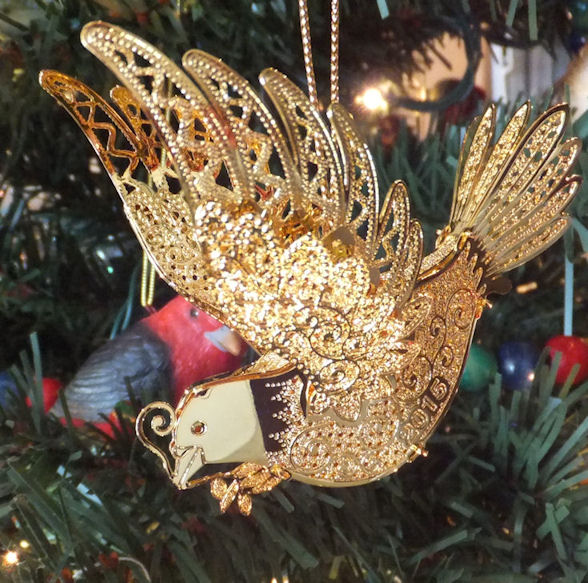 My parents send me a gold Danbury Mint ornament every year and they often save the birds for me.  So I have a couple of gold ones like this.  They’re very intricate. 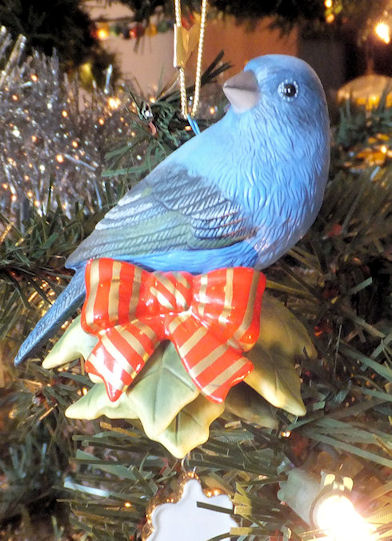 They’ve also been sending me a porcelain bird each of the last 3 years.  This is the one from 2013.  They’ve very detailed and quite heavy, so I have to make sure they’re on a firm branch. 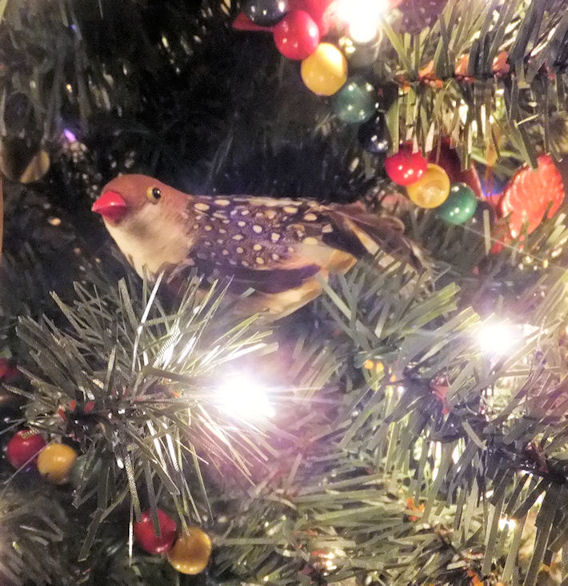 This one is made with real feathers and there’s a strip that you can pull out, which makes the bird chirp. (If I really wanted to provoke the cat.)  I love the look on his face, like, “You talkin’ to me?  Whadda YOU lookin' at?” 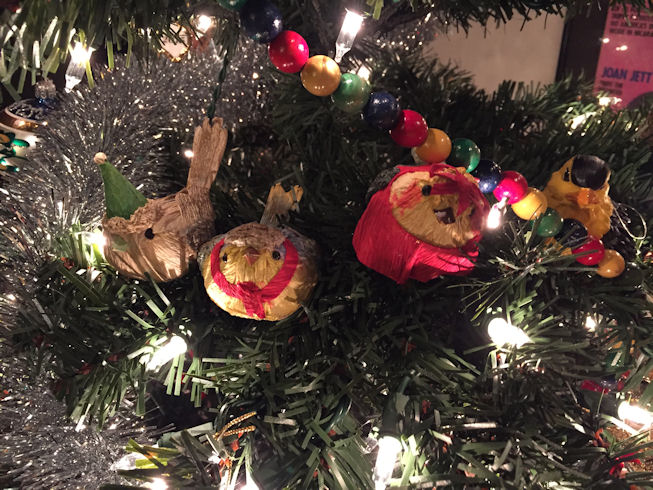 These little chickies have the same attitude.  They’re made out of husks or something, so they’re very light.  I always sit them together on a branch.  The goldfinch on the right is porcelain, though, but he fits right in.

Another sub-theme is Steelers stuff, of course.  I addition to about a half-dozen bulbs, I have these two molded figures. 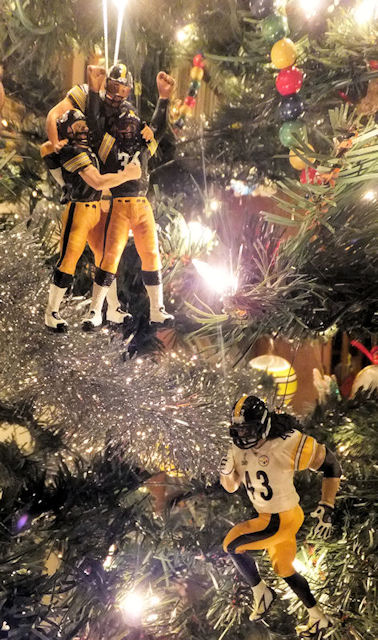 The detail is exquisite.  There’s Ben, The Bus, and Polamalu up top, and Troy again, by himself.

Back when my Grandma D passed, each of us kids got to pick one of her ornaments, to remember her at Christmas.  This was my pick. 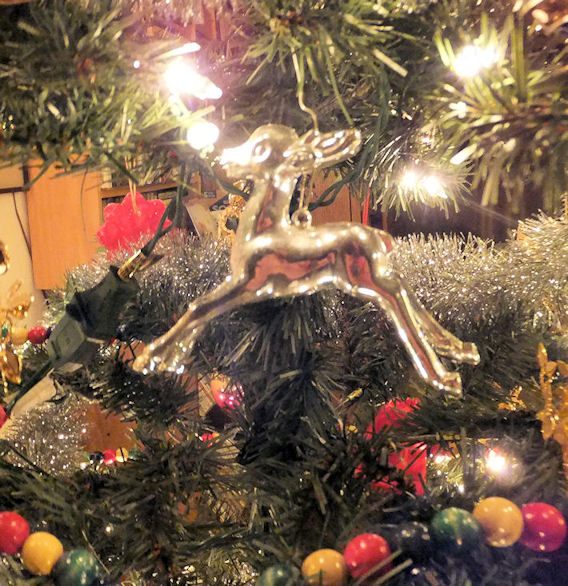 I always loved this Rudolf ornament.  I always position it in a clearing, so it looks like he’s flying by. 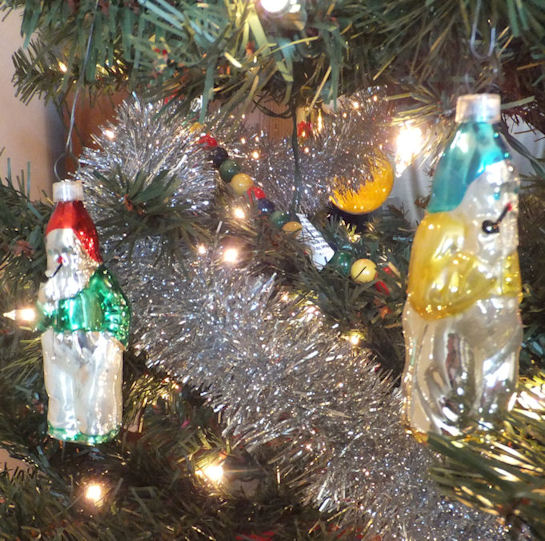 I also ended up with these dapper elves, from Grandma’s collection.  They’re made of extremely thin glass and are quite fragile.  It’s a miracle I haven’t broken them yet. 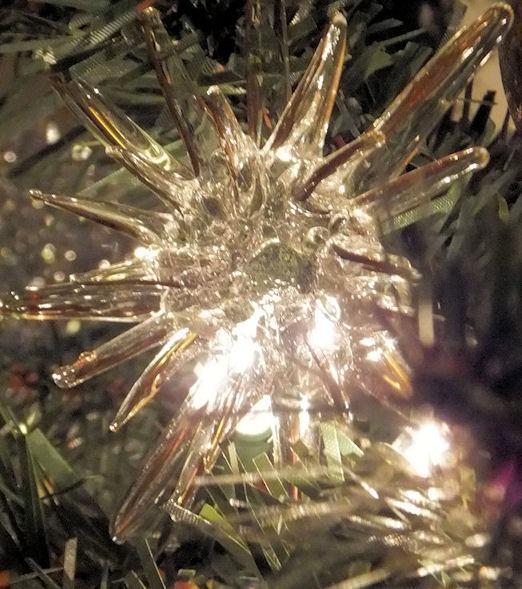 This is another of my parent’s “specials,” a hand-blown glass star.  I always put it right in front of a light bulb, for extra twinkle. 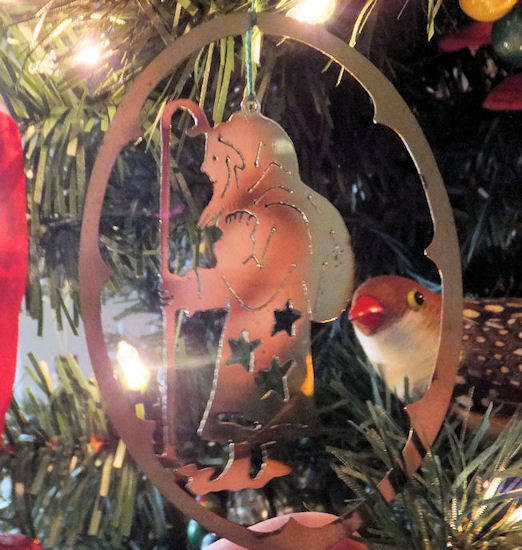 This is another “special,” and comes with a story.

When I was in 9th grade, we had a class project to write a story, type it out, and bind it into a book.  Mom had told me a story before, which I’m now sure she lifted from a Mel Brooks bit but didn’t know it at the time, about the “real” story of the Three Kings.  In her version, they were named Balthasar, Melchior, and Murray.  I’ll spare you the details of the story, but Murray was apparently quite a card.  I took the main points of Mom’s story, fluffed it up with a beginning, middle and end, and presented the book to her for Christmas.  Or Mother’s Day… I don’t remember.

So that’s Murray, up above, (being photobombed by Suspicious Bird). 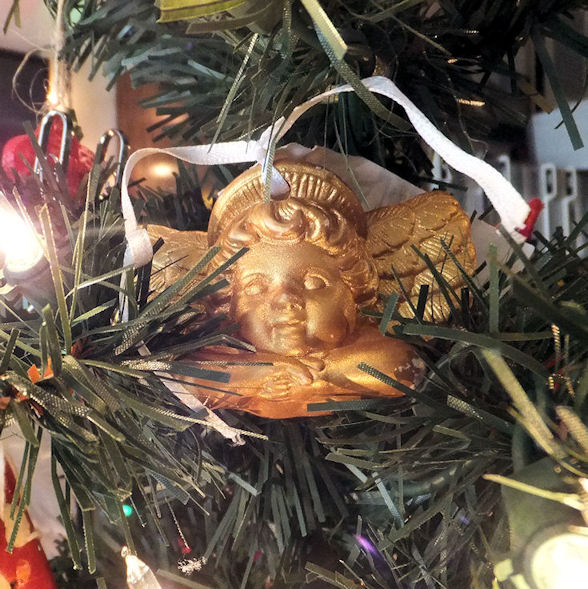 Obviously, I’m not much one for religious imagery, but I have room for this cherub.  This was a table favor at my late buddy Brill’s wedding, back in 1996.  I’ll always have this one on the tree.

We used to make ornaments as kids, so I still have a couple of those monstrosities. 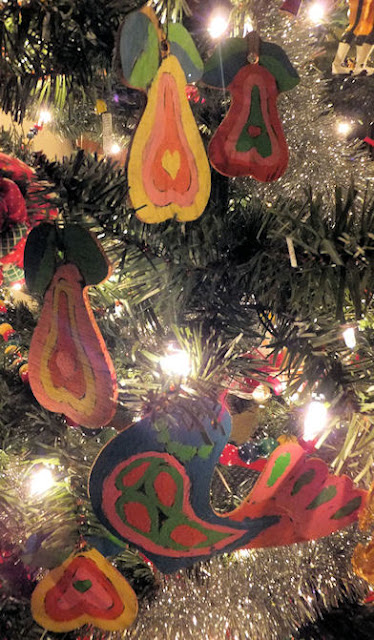 This was from a paint-by-numbers partridge and pears ornament kit.  I was probably in 3rd or 4th grade when I made these.

I love how just about anything can be an ornament, like this mini Gentleman Jack bottle 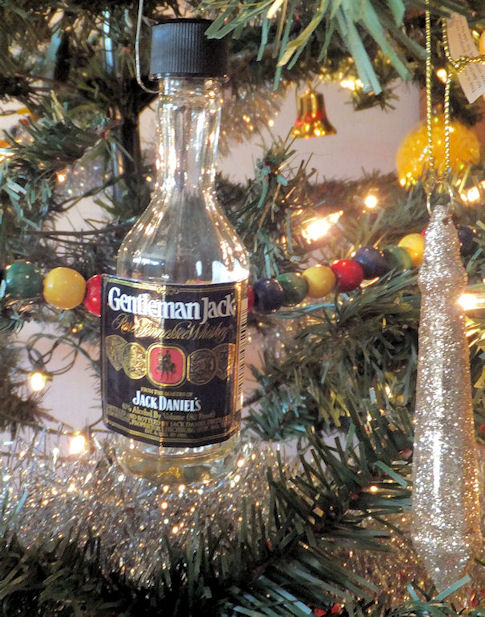 And this peach, from my old record store, Peaches. 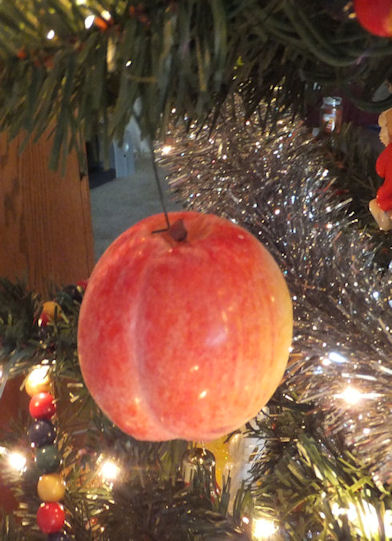 That goes along with these. 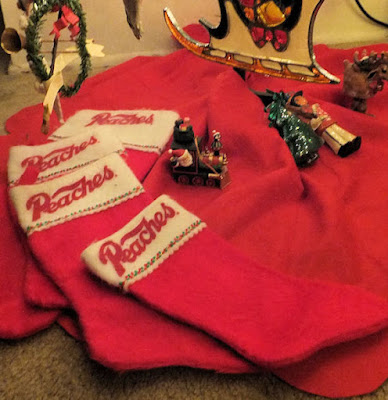 I have no idea how I ended up with these… Must have been when we changed our name and had to get rid of everything that said “Peaches.”

Last year, I saw this cool Darth Vader ornament at Target but was put off by the price.  I went back the day after Christmas, hoping to pick it up on sale, but it was long gone by then.  So I got this instead. 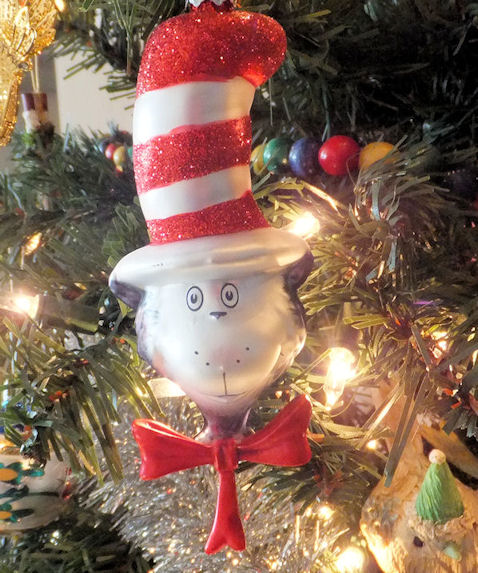 All year long, I fussed at myself for not getting the Darth ornament, so this year, I corrected my previous inaction. 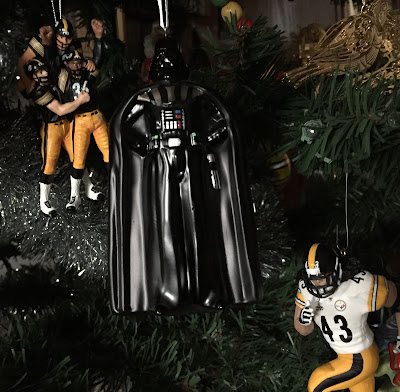 Little known fact: Darth Vader was an All-American linebacker at Empire U.

Anyway, that’s the highlights.  There are still about 40-50 more, either specials or ornaments made by various crafting-gene relatives. (I probably have a dozen from my Aunt Linda alone.)  Working at the craft store back in the 90s, I was able to pick up a number of cool ornaments, many of which were music-themed.  (I forgot, that’s another sub-section.)

So yeah, it’s a lot of work every year, pulling all this stuff out, but once I get started, I just get caught up in the memories and the next thing I know, I’m done.

Now tell me, is your tree up?  What kind of stories does it tell?

Yes. Our tree is UP with favorite stories. None are lovelier than those here in your "Ornamental Journey". If we had an attic, I would still stomp around feeding reindeer.
What connects Darth Vader to Christmas? Mr. MaGoo, yes, but DARTH VADER???

WOW! You really are ARTSY!
But Tradition RULES. Someday Darth Vader will be in a manger.

OMG! Best ornament ever! Dearth Vader in a manger, being visited by R2D2, C3PO, and that new rolly droid.

QUICK! Notify China!!! Get those Droids rolling off the assembly lines. No time to lose. Black Friday will be here before we know it.
"Star Wars" movie crowds could be buying their Darth Creche doo-dads as they wait for tickets. NOW!

"Awaaay in a manger/No crib for a bed/Little Darth Vader lay down his hard head/la la deda lala..."
Tune in tomorrow.

That is a very eclectic and enjoyable collection.

King "Murray" is mine. I created his story using a name Mel Brooks often uses for characters from Jewish lore.
Epiphany IS when we get there!

No way you created "bricking" a camel...

Right! Credit Grandpa D. with that one. You grabbed it for your book.
Moral: Watch what your say around little guys with big ears.