How You Can Tell if I'm Losing my Shit

This year, I resolved not to make the mistake of buying tickets when they first go on sale.  Every time I do that; when game day comes, it’s crappy out.  So this year I vowed not to buy any tickets until I’ve seen a weather forecast.  I went Wednesday because it was the first game after Opening Day and I was pretty antsy to go see a game. 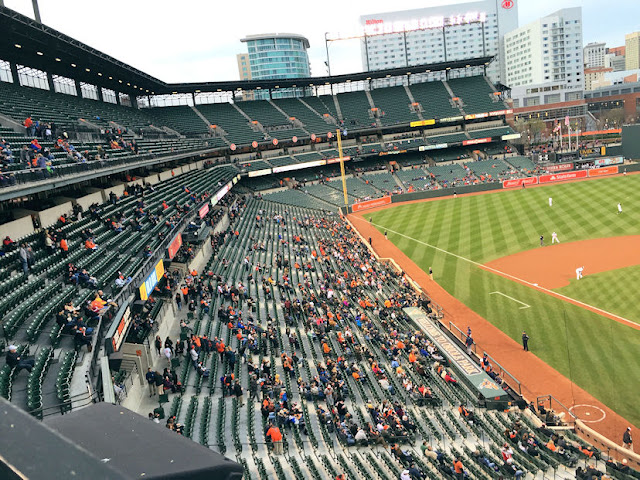 Attendance announced at 12,600. Most were dressed as empty seats.

What a difference between the first and second games of the year.

I had a nice spot, 1st row of the upper deck, behind home plate.  But it was cold and windy and I was rapidly having less fun as the night went on.  With the Orioles up 4-1, I made a break for it in the 6th inning and was home in time to watch the end.

Sunday, I saw it would still be cold, but sunny.  Game time temperature was about 48.  But I bought a seat where I knew I’d be in the sun the whole time; 3rd row up from the left field wall.  It was fun and I got on TV again.  (I’d run the picture but due to my Orioles hoodie, I’m only identifiable as a big orange blob.)

These two games were the first times I ever tried to use the “iPhone Wallet” app.  When I got my tickets, I had the options to print or add to Wallet app, or both.  I did both, for a couple of reasons.

First, I wanted to try the Wallet app because it’s the new shiny thing.  And it’s easier to deal with than trying to fish the paper ticket out of my pocket.  I have to have my phone out of my pocket anyway, when I go through the entrance metal detector. 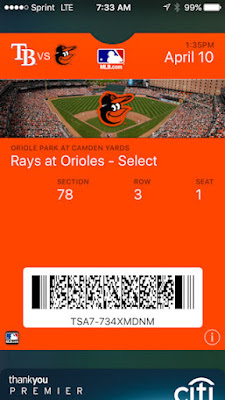 My e-ticket from Sunday.

But I still like to have the paper ticket for the souvenir and for tradition.  Having both means of ticketing allows me to have a backup system in case something goes wrong, like if I lose the paper ticket or my phone runs out of juice.  (I won’t even consider the possibility of losing the phone.)

As you may know, I keep all my stubs and after the game, record the score and attendance on them.  Sitcom Kelly and I have had extensive conversations about my ticketing quirks, for example, that I don’t like printing paper tickets (although not so much that I forego the convenience of buying tickets online over getting standard cardboard tickets from the box office).

The paper tickets are printed on a full page; then after the game, I cut out the “ticket-shaped” portion for permanent storage.  I always print them in color too; the better to simulate a traditional ticket stub.

Last summer, Sitcom Kelly and I were going to a game and she ordered our tickets online.  When she gave them to me, she said, “Sorry, there’s a fold in the ticket.”

I said, “That’s OK, I’ll smooth it out with the iron when I get home.”

I was totally joking, but she never even questioned it.  She just assumed it was just another one of those weird things I do.  She’s so used to all my strange habits and quirks; she figured this was just one more.

It cracked me up because it made me wonder what exactly I’d have to do in order for my friends to think I lost my marbles.  See, it wouldn’t be the normal stuff… It’d have to be on a whole different plane.

So as a public service... or rather, a personal service, here’s a list of ways you can tell if Bluz’s elevator is no longer going all the way to the top:

Please; if you should witness this or any similar activity, please summon a representative from the Charm City Home for the Bewildered.