I have never seen so much “pretzel logic” as I have surrounding this ACA repeal.  Politicians on the right are twisting themselves in knots trying to sell this shit sandwich as something positive for America when it is clearly only positive for the super-rich people who are getting their taxes slashed.

As soon as the Republican Insurance Plan (or RIP*) became public, Republicans began a campaign to discredit the Congressional Budget Office (or CBO) because they knew this independent, bi-partisan bill evaluation committee would depict their health care bill accurately.  They knew it would be bad PR because they absolutely knew their proposal does very little to help lower and middle-class Americans.  The last thing they want is the truth getting in the way of their rosy narrative.

The funny thing about this CBO report… Trump spent all last year slamming Obama by using CBO projections.  They seemed pretty accurate to him then, right?  And since his election, the CBO is led by one of his own appointees.  But now their projections are “unbelievable, wrong and virtually impossible?”  Please.  It’s just one more example of the GOP making up claims out of whole cloth and attacking anyone who rebuts them. 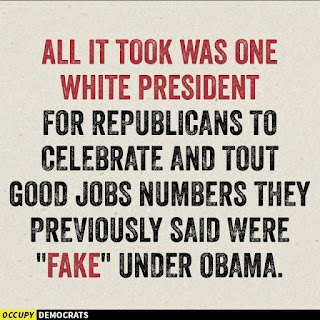 OK, it’s a different subject but the same principle.

It’s obvious this bill is nothing but a gift to the rich… look who’s lining up against it: The AARP, the AMA and other doctor and nurse organizations, an array of hospital groups, and then the usual assortment of liberal interest groups.

And then there are a number of conservative groups who are also against it, albeit for vastly different reasons.  The Heritage Foundation, the Cato Institute, Americans for Prosperity, FreedomWorks and the Tea Party Patriots think it still gives too much away to all those wretched poor people.  But it might be enough to kill the bill.

And that’s what Trump seems to want now.  He’s asking why they don’t just let the ACA implode on its own so they can blame the Democrats.

That’s akin to the Democrats launching a giant balloon, which the Republicans shoot down and then blame the Democrats for the crash because it’s their balloon.

Of course the ACA will die if insurance companies know it won’t be supported by the government.  They’ve got no reason to work with a system that’s going to be abandoned at the first moment it is politically expedient to do so.  That’s why it’s been going down the tubes in the last couple of years.  Republicans have been causing uncertainty over the program, taking symbolic vote after vote to repeal it, and generally showing hostility.  But now those votes to repeal won’t be merely symbolic.

And Republicans have become expert in shifting blame… all they have to do is keep repeating “It’s the Democrats’ fault, it’s the Democrats’ fault.”  Their minions at Fox “News” and on talk radio will provide the echo chamber and soon, “everyone will know” that the Democrats are to blame.  They don’t even have to blow the smoke from the barrels of their guns.

The only thing we can do is be unrelenting with the truth and call “foul” every time they try to shift the blame.  Republicans killed the ACA in its crib through abandonment, neglect and withholding remedies, all because it costs the richest Americans some tax dollars, without which they are STILL the richest Americans.  But yeah, now we have the “freedom” not to have to purchase insurance, so we can die off that much faster and leave an even greater slice of the pie to the wealthy.  That’s a win/win for them.

There are no protests or petitions or speeches that will change any of this.  They absolutely don’t care what the average American has to say.  They listen only to their political benefactors, who finance their campaigns.  They do not dare displease their sugar daddies, or else they’ll find themselves facing a tough primary challenge, as the money guys buy someone else to do their bidding.

The only recourse is to vote the bastards out.  We must make our voices heard at the voting booth and proclaim “you will do OUR bidding instead of that of your corporate overlords.”  We must REMEMBER what’s going on right now and who is robbing people of their health care.

Granted, I’m not hopeful.  By the time November of 2017 rolls around, Republicans will have come up with a new distraction or outrage, designed to divert our attention from those who pull the strings of government; leaving them free to push our tax dollars into their bulging coffers.

and the Swamp thickens...