Greetings from scenic Whitehouse, Ohio, Motto: Ain't I seen you around here before?

First off, I'm attempting this post via iPad, so any bizarre spellings or syntax errors are due to the Auto-correct function.  Oh, and so are all the errors in all 692 of my previous posts... Yeah, that's it...

The flight was  uneventful, if you don't count my sitting in Screaming Baby and Kicking Child Central. The 4-year old little shit behind me kicked my seat roughly every six minutes, from Baltimore clear to Detroit, no matter how often his daddy told him to stop.

If only there was more room in the overhead bins...

Meanwhile, I kept thinking back to what Pinky told me before I left: "Now be careful... You can't drink like you're a teenager any more."

My buddy John picked me up right on time and in no time, we were rolling dirty down I-75, heading for Toledo.  John was anxious to show off the new Bose speakers in his car, so I brought my digitally recorded CD of the Scorpions, with the Berlin Philharmonic.  My car speakers don't do it justice.  John's, however, certainly did.  As we were rocking out to "Rock You Like a Hurricane," cars in the other lanes were yelling, "Come on, turn that down... I can't hear my own passengers... With the windows UP!"

After picking up John's dad, (and turning the stereo down), Rik and his son Jake joined us at our regular haunt, Shawn's Irish Tavern.  After filling up on beer, food, and fellowship, we made a supply (beer) run and headed for the Dad Cave.

Usually my first night in town entails a long, noisy Garage Party, but Friday night also had our high school All Years Reunion.  We went to it last year, but I never saw anyone I knew from my class.  Sadly, this year was no different, so we spent the time yakking amongst ourselves, and the couple people I knew from non-school scenarios. (My buddys' assorted friends and relatives.)

Eventually, we drifted back over to Shawn's.  We might have left earlier but John bought a lot of drink tickets at the outset, and was given more during the course of the night, so I felt we couldn't let them go to waste.  Friends don't let friends waste beer.

Saturday was pretty chill, after working it pretty hard the night before.  I got to enjoy a classic Northern Ohio thunderstorm that evening, complete with ominous clouds, giant bolts of lightning, and of course, crashing thunder. 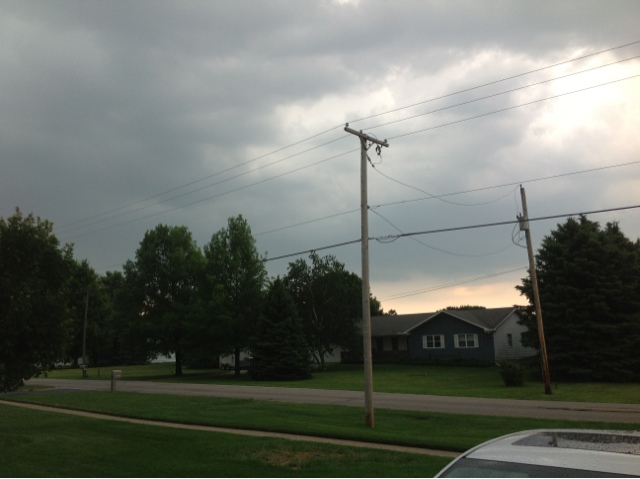 This was the storm rolling in.  It looked much more ominous at the time.  I have better shots on my actual camera; this was all I got on the iPad.

Sunday morning, I got to reacquaint myself with a long lost friend: 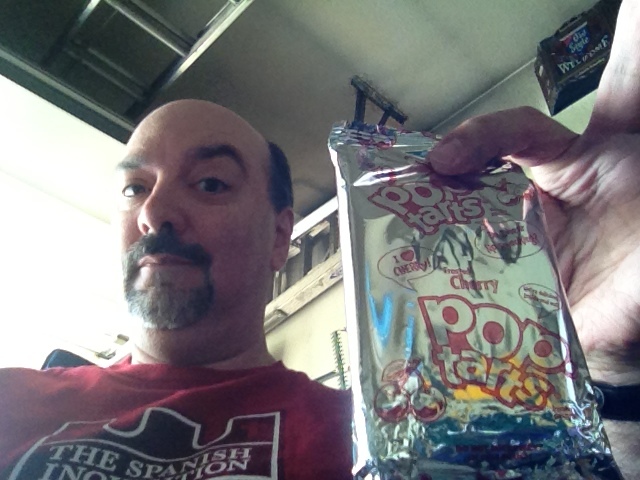 My mother's nightmare... Her eldest eating Pop Tarts for breakfast.  "Revenge is mine!!"

On Sunday, we had two events scheduled.  First off, John grilled a turkey.  He had the grill lit by 9:30 and we were munching bird by 4:00. 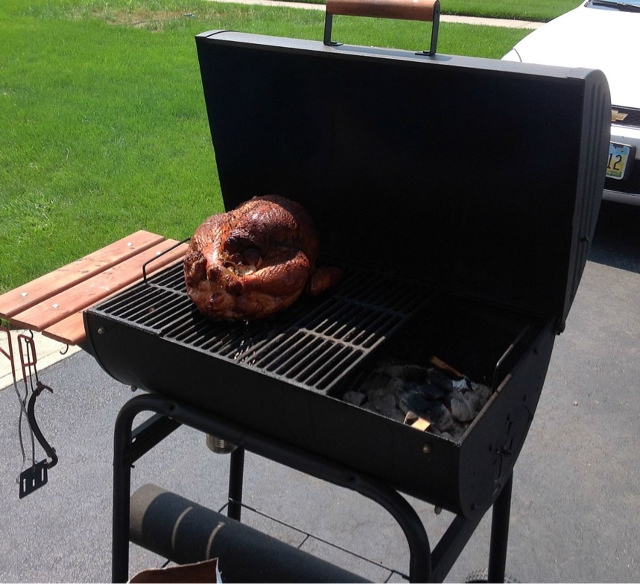 The trick is to keep the coals on the right side, and the bird on the left. There's a vent by the coals and the smoke pipe over the turkey.  That brings the smokey heat right across, thus infusing the whole thing with a rich, hickory flavor.  Stuffed with sausage and onion, the whole thing was delectable.

I also heard there were vegetables present, but I can't confirm or deny.

There's no doubt that I wasn't the ONLY one that had enough turkey... 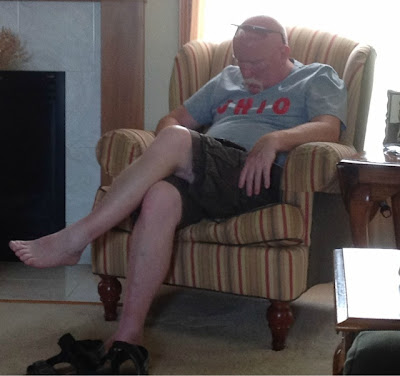 The Chairman of Fuck-Off, resting up for a big night.

Rik's daughter Kia came by as well.  This was the first time I got to meet her youngest, 8-month old Brogan, aka the Happiest Baby in the World. 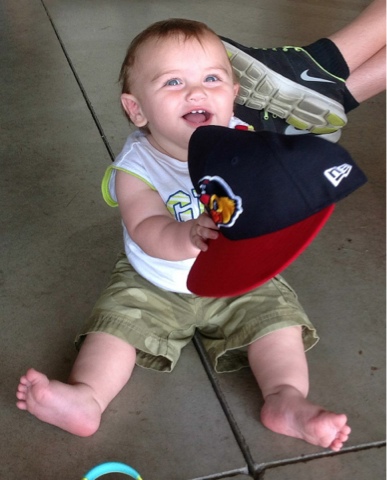 Just look at that face!  He was like that the whole time. 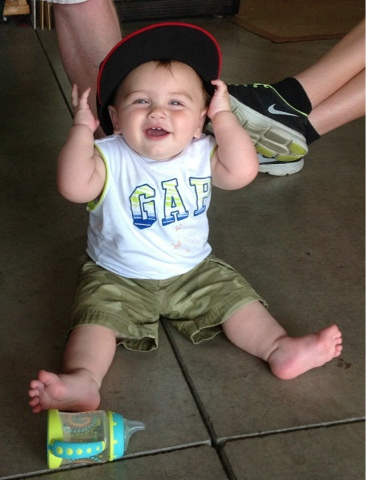 Ready for the Mudhens game!

After dinner, we had a date with the Toledo Mudhens.  We sat in the last section down the left field line, before the outfield wall.  Sunday was the only day we could all make a game before the Hens went on the road, so we had to take it.  We didn't know it would be Fireworks Night, AND Kids Run the Bases Night.  I wish they would have Grownups Run the Bases night.  Probably too many drunks would face-plant along the way.  I'm not sure I could make it all the way around any more.  But when I got home and Pinky asked me how my trip was, I could say, "Well, I got to 2nd base Sunday night."

Of course I'd probably have to walk home from the airport...

I'll have more news as the week progresses.  The forecast... Lots of baseball.  We have Jake's game tonight, and a Tigers game on Thursday afternoon.  And I'm sure there will be beer sprinkled liberally throughout the week.  And tomorrow, I get to re-engage with another old friend, Myles Pizza.