Not So Grand Theft

Q: How do you create a conservative?

A: Rob a liberal.

That’s the old joke, isn’t it? I got to test that hypothesis a couple weeks back, when I had some stuff stolen from my car, in the parking lot right outside my place.

I got in the car that morning and I immediately felt like something was wrong. I looked down into the storage compartment under my sound system and saw that my sunglasses were gone.

Normally that could have meant that I just left them at work or in the apartment, but I hadn’t worn them anytime recently. I looked to my right and saw that the passenger-side door was unlocked.

That gave me pause. I knew that I only flicked the “unlock” button on my key fob once, which should only unlock the driver’s side door. (Two pushes unlocks all doors.)

With that, I began to take inventory, to see what else was gone. I opened the top section of the center console. Coin container: there. USB charging cords for phone and MP3 player: there. Burger King coupons: there. (Phew!)

Then I opened the lower compartment and what I saw broke my heart.

Can you imagine that? And these weren’t even retail CDs… these were 13 homemade mix CDs full of dinosaur rock and blues, with cute little graphics inserts I designed and printed myself. What kind of car burglars would want something like that?? It’s not like they can sell them… My only guess is that they probably didn’t even look inside the case.

I checked my glove box and my car docs were still there, but I didn’t see the emergency knife I kept there. I have one of those fold-out knives with a 3” blade, a blade-slot in the handle to cut a seatbelt, should I be dangling upside down, and a steel point on the end of the handle, to break the glass should the car be under water after I cut off the seatbelt. 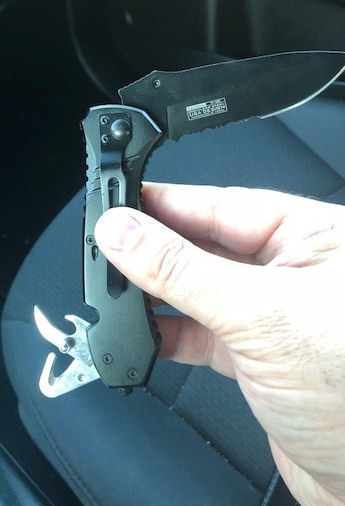 A week later I ended up finding the knife wedged between the seat and seat back of the passenger seat, but not until I had already ordered another one. I also thought they got my large golf umbrella, but I found that stuck in the back of the trunk.

Other casualties? A lint roller.

Sweetpea had just given me the lint roller, to combat the onslaught of second-hand dog hair that was invading my car. I hadn’t even opened it yet.

They leave the knife, phone accessories, and several bucks in change and assorted crap in my trunk, but take cheap, drugstore sunglasses, homemade CDs, and a lint roller? WTF? 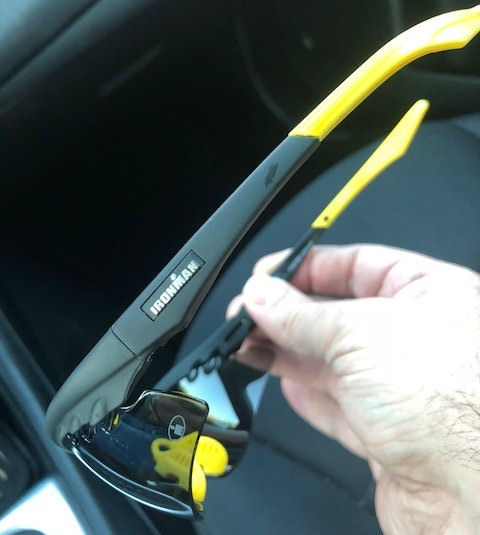 Who the hell would want these? (Outside of The Burgh, that is…)

I wondered how they got in; I ALWAYS lock my doors and there was no sign of break-in… and where? I mean, they could have stolen that stuff when my car was parked at Sweetpea’s house the night before and I might not have noticed when I came home after dark. But I managed to put it all together.

It came down to that one-push unlocking. The passenger door was open that morning and I didn’t open it. I’m very conscientious about locking up when I visit Sweetpea. Her neighborhood has seen better days.

And I lock up the car at home too; I always have, especially ever since I had my car burgled for spare change about 10 years ago, in my parking lot.

In the end, it was pizza that did me in.

When I went to see Sweetpea that night after work, we got take-out pizza. I took home the leftovers, still in the big pizza box. When I pulled into my lot, I had to wrangle my laptop back out from behind the passenger seat, along with the pizza box on the passenger seat, plus another container of leftovers. Obviously, amid all that wrangling, I forgot to lock my doors.

You’d think if you left your door unlocked just once, you might get a “bye” on it. But that one time I left the door open was the one time some schmo came looking for an easy score.

Now I think it’s more like some dude (or dudes) troll the parking lots regularly, looking for cars left unlocked just that “one time.” Strolling through lot after lot in the middle of the night would be easy as pie. Mine is such a quiet neighborhood, literally nothing is going on outside. I swear, anytime I come home after dark, like 9:30 PM, it might as well be 3:00 AM.

So, I reordered my knife, as I said, plus another pair of shades and a new CD case. Sweetpea suggested I put a cheap stick-on label on the case and mark it: “HOMEMADE ROCK COLLECTIONS 1980-95,” like it’s part of a whole set of other cases. That should repel any CD thief under the age of 40.

But it’s the loss of the CDs that really hurt. I spent a lot of time and effort putting those together. Luckily, I still have the graphics inserts with song listings on my PC so I can recreate the collection. And I have plenty of blank discs. It’s just going to take some time.

Also, I’m going to have to repurchase some of the MP3s, because a lot of the songs I’d burned had copy-protection on them. Then once I upgraded to a newer PC, those files no longer play, nor can I burn them to CDs.

At least that pizza was good…

But did the experience turn me into a conservative?

Please. This was chump change compared to the robbery the current conservative administration is proposing for the middle and lower classes.

If only we could just lock the doors to keep out the Koch Brothers.
Posted by bluzdude at 6:30 PM

Email ThisBlogThis!Share to TwitterShare to FacebookShare to Pinterest
Labels: Baltimore Bluz, Bluz LIfe, Republicans, Stories and Misadventures, Things That Piss Me Off

What a blow! Losing irreplaceable CDs is devastating, especially since they are of no use or meaning to the thief.
Send bad vibes to the thief as I did when the gang at O'Hare airport lifted my jewelry, of no value to them but priceless to me.
They regretted that theft, I trust. All were discovered and arrested several years ago.

There's no escaping the karmic wrath of the Lil Mother.

Can't even think about that. UGHHH Pity the poor thieves.