I haven’t been the Ravens’ Stadium for a Steelers game since 2008, the year I got sucker-pushed and assaulted in the upper deck, after a Ratbird loss. Then last year, a work contact invited me to a game in their corporate suite, which I hesitatingly accepted.

Escaping that experience without cuts or bruises, I decided to take my friend up on his offer to see the Steelers game this year. And even better, I could take Sweetpea to what would be her first pro football game. My plan was to wear a light jacket over my jersey, thus allowing me to move about incognito until I could get up to the safety of the suite. They don’t allow gang wars in the suites.

As you may have heard last week, there was a wee bit of controversy about football players kneeling down during the national anthem. Both teams this week took great pains to pronounce that they would stand straight and tall this week.

I had to laugh on the way in, as I passed by the statue of Ray Lewis, captured in mid-spasm of his game-starting “dance.” A local petition claimed to have over 45,000 names asking for the statue to be taken down, due to Lewis’s participation in the anthem debacle in London. (He was on both knees, so I assume people were doubly offended.)

I laughed because this was a guy whose posse killed two guys in 1999, who got rid of evidence and the murder weapon, misdirected the cops, eventually pled guilty to obstruction of justice. Then he testified against the alleged assailants, who were then found not guilty, in part because of Lewis’s untrustworthy testimony.

All that is fine with the people of Baltimore as far as Ray being statue-worthy. But he takes a knee during the anthem to protest police injustice and that’s what offends people to the point of wanting his statue removed? I think some of these fine, upstanding “Patriots” have their priorities scrambled.

The Ravens went all out to jump on the old U-S-of-A train. They played the full Lee Greenwood “God Bless the USA” song, with loads of red, white and blue lights and decorations. They did a full color guard presentation.

Baltimore still plays up the Edgar Alan Poe angle any chance they get. At the gate where the players enter, they have it done up like a graveyard or something. 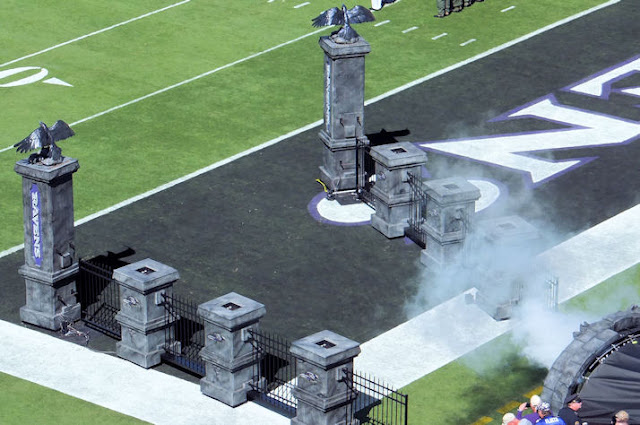 All I can say is once the Ratbirds came spilling out of the tunnel through all the smoke, it looked like they were shooting out of a sewer pipe. Which only confirmed my long-standing suspicions. 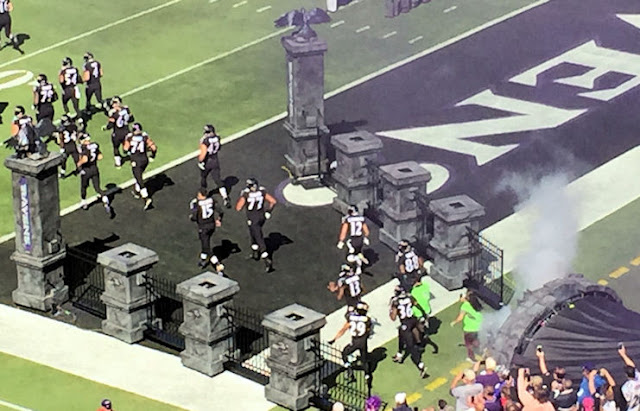 One much-needed light spot was when Terrell Suggs came out of the dressing room wearing a “Bane” mask. As you may recall, Bane was the villain in the last Batman movie, who blew up Heinz Field (as Pittsburgh stood in for Gotham City during filming) and two football teams, including many actual members of the Pittsburgh Steelers. 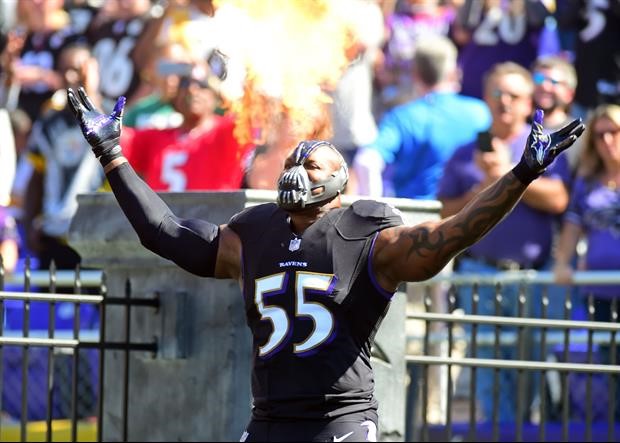 He even did the “Bane pose,” clutching his hands on the bottom of his collar. As the designated Ratbirds “villain,” I don’t like the guy, but I’ll give him credit for that bit. I thought it was clever. I wonder what’s next though… coming out with a Pennywise the Clown getup?

Anyway, then came the long-awaited moment of truth: the anthem.

Before the anthem, the announcer went into a long spiel about pausing for a moment of prayer and reflection, to “pray for kindness, for unity, for equality and justice for all Americans.” With that, the whole Ravens team got down on one knee and the crowd erupted in boos that shook the whole stadium. They didn’t even boo the Steelers that hard. I mean, it just reverberated.

Ladies and gentlemen, I give you the City of Baltimore. Philly may boo Santa, but Baltimore boos silent prayer.

The Ravens were going with the Cowboys option of kneeling early, then standing for the anthem. I hate to give the Cowboys credit for anything, but I don’t think that’s a bad idea. You can get your point across without appearing to dishonor the flag, the military, the police, hot dogs or apple pie.

But it didn’t matter here. They booed like it was their job to be that offended.

By what? Who knows? I suspect that the predominantly white crowd didn’t like having to acknowledge the obvious institutional racism that pervades this country in general and police forces in particular.

I heard a number of people try to provide alibis for the crowd, the most common being that they didn’t know they were only going to kneel before the anthem. I call bullshit. The announcer made it clear that a moment of prayer and reflection was coming. There was no confusion unless the crowd was brain-damaged. (OK, maybe.)

They knew what they were booing and made it clear the next day’s morning’s paper. They don’t want to be reminded of social problems when they’re at a sporting event, which sounds an awful lot like the very epitome of white privilege.

If only people of color could pick and choose when to be discriminated against. Maybe they wouldn’t have to inconvenience everyone by protesting their status as second-class citizens.

Anyway, they did the anthem (for which all teams stood,) which featured a flyover by four A-10s, which I’m sure was totally not a waste of taxpayer dollars. Maybe we should have demanded our money’s worth out of those flights and asked them to drop a couple bombs into the poor neighborhoods. They could wipe out the crime AND clear room for some new condos in one fell swoop.

Eventually, there was a football game to be played and it was a fairly standard affair from that point on. And as usual, I still had things to complain about.

The Ravens still decline to announce the name of the opposing defender who makes a tackle against them. They announce their own players’ tackles, of course. And they announce the opponent’s names of those who throw or complete passes or run the ball. But no tacklers. I still can’t imagine why, other than cheap homerism. It’s like it would be an admission of weakness that the other team could make a tackle against your guys.

This is something they brought with them from Cleveland because the Old Browns did the same thing. It was annoying then and it’s annoying now. It does a disservice to the paying customer. Even if I’m a home team fan, I want to know who’s tackling my guys so I know who to yell at for not blocking properly. Next time I’m there, I may take a knee to protest it.

They have a new stupid wrinkle since I was there last. They have a “crowd effect” counter that counts off every time the opponent false starts on third down or doesn’t convert. At face value, it’s no biggie, but I see it as sucking up to the crowd’s collective ego. It would be more accurate if they also listed how many times the crowd did absolutely nothing of consequence to affect the opposing team.

For example, the Steelers probably converted 4-5 third downs on their opening drive, before eventually committing a false start penalty. The big counter then read “1.” It should have read “1-5,” like a won/lost record.

All bitching aside, though, it really was a good day. We had a great view: 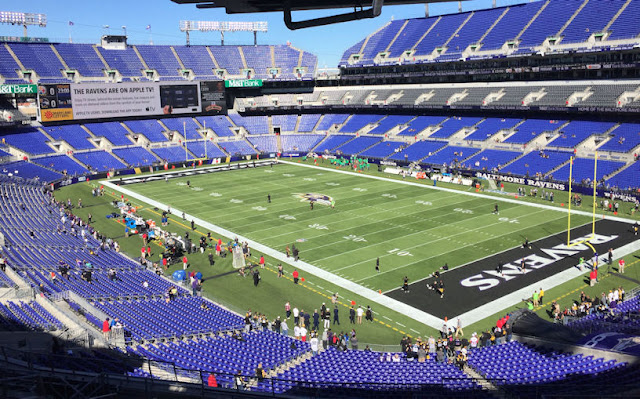 It was a beautiful day for football, with the high temp around 70.

We had great food in the suite: 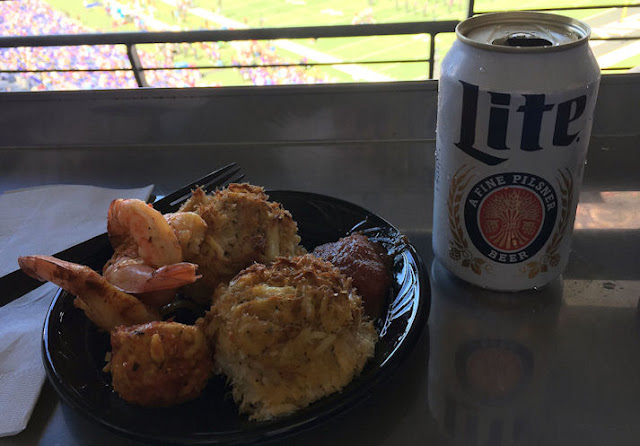 First helping: 2 crab cakes, some shrimp, and a meatball. You don’t even want to know about the other helpings.

We got to go down on the field for warm-ups: 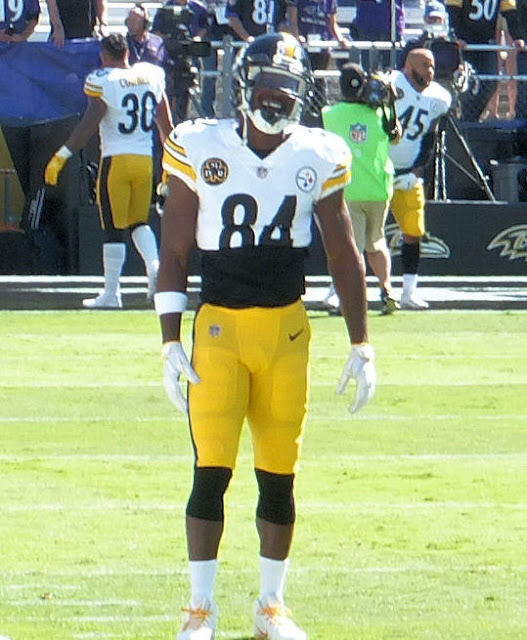 Antonio Brown, before assaulting the Gatorade cooler. I asked him over the house for Tang and egg salad sandwiches.

And I got to show my honey a good time, on my birthday.

Oh yeah, my birthday was yesterday too. But I’m totally not saying how old… 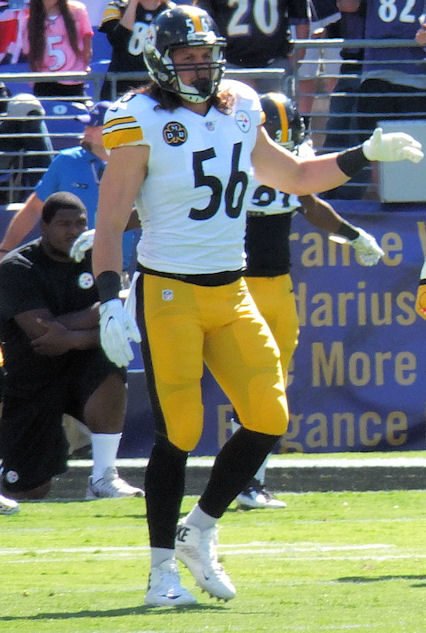 There were a lot of yinzers on hand but I didn’t witness any inter-fan violence, which was a nice change. Of course, I was mostly in the gentrified air of the 2nd and 3rd levels. (The “club level” is on the 2nd level and the fancy-schmancy suites are on the 3rd.) I know better than to go up to the upper deck wearing Steelers stuff again. On the middle levels, someone wants to see your ticket roughly every 25 feet.

I did get to spend halftime with my brother, though, on the 2nd level. He was there with my nephew, who is a freshly minted 12-year old now, and was seeing his first pro football game. Happy Birthday, Sammy! It’s been close to 12 years since this story…

The only downside to the day was getting out. My plan was to leave with about five minutes left to go, but apparently, about 35,000 other people had the same idea. That probably had to do with the Ravens trailing by a couple of scores. We ended up taking the long way out of town, but we made it.

All in all, a good day. I might even try it again next season, if my white privilege holds out.

DVD Director’s Commentary: I considered writing about the slaughter in Las Vegas today, but I don’t know that I have anything new to say. Just look up what I wrote about the last several public slaughters and everything still holds true.

If the murder of two rooms full of first graders doesn’t move the needle on getting rid of automatic and semi-automatic weapons, nothing will.

Unless, of course, the next killer takes a knee before shooting. I bet we’ll be outraged enough then…

But until that happens, there’s always “thoughts and prayers.” In other words: 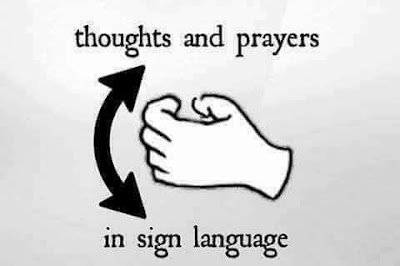 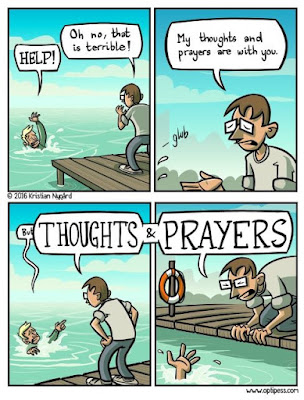 What once started as Colin Kaepernick trying to initiate a conversation about police brutality is now just another watered down message of inflammatory politics - us vs them, two obnoxious caricatures booing and finger wagging at each other.

Wake me up when all of the petty squabbling is over and we start actually working toward a solution.

That'll never happen. It's too easy to wrap yourself in the flag and claim offense.

Thoughts and prayers totally work, right up until the next slaughter.