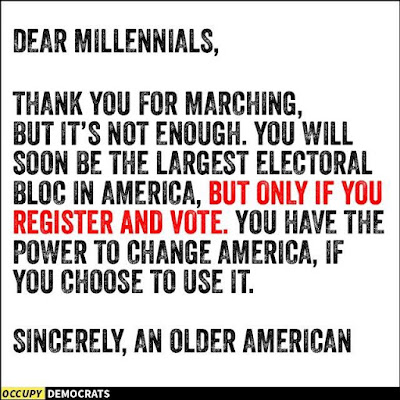 I didn’t write or design this graphic, but it fits.

I’ve been saying, ever since this movement began, rising from the blood spilled in Marjory Stoneman-Douglas High School, that speeches, demonstrations, and marches aren’t enough. This transformative fire needs to translate into votes if there is a hope of affecting any changes in the nation’s gun laws.

And I’m heartened at what I’ve seen so far, in that there was a voter registration drive going hand in hand with the marches. Best to register as soon as possible, before the inevitable Republican push to add more obstacles between voting and those trending Democratic.

The GOP “war on voter fraud” states already disallow the use of student IDs to register, so I’m not sure what else they can do to discourage the youth vote. Maybe require a parent’s permission slip? I wouldn’t be surprised if they tried to flat-out raise the legal voting age, despite how transparent such a ploy would be. I’m sure they’ll think of something.

You can tell that Republican leadership is scared stiff of the anti-gun youth movement. Their greatest hope is that it will all pass when the “Next Thing” comes along. It’s always worked this way in the past, however, this time seems different.

It’s been five weeks since the Florida shooting and we’re still talking about it. That’s about four weeks longer than we usually talk about mass shootings. This movement has legs.

So, it’s no wonder the smear machine is revved up. The NRA and their lapdogs in the GOP are throwing daggers and pumping out misleading information all over the place. US Congressmen are taking shots at 17-year old kids who have already survived someone literally taking shots at them.

There’s an obvious photoshop of Emma Gonzalez ripping up the Constitution, with requisite effects to make her scarier-looking. (Think the “blackened OJ” magazine cover.)

Former Senator and reigning champion of the Urban Dictionary, Rick Santorum, snapped that these troublesome kids should be learning CPR instead of trying to tell adults what to do. Doctors and people familiar with common sense and decency pointed out that not only will CPR not do diddley-squat for someone shot with an AR-15, but his advice is for them to prepare for when they get shot rather than containing even an ounce of prevention.

The NRA is claiming that “gun-hating billionaires and Hollywood elites are manipulating and exploiting the children, as part of their plan to DESTROY the 2nd Amendment and strip us of our right to protect ourselves and loved ones.”  This is part of a plea to join the NRA.

What the NRA and their pet Republicans don’t get is that these kids are leading us. They’ve seen, first hand, what these semi-automatic rifles can do; how much slaughter can be conducted in mere minutes. There can be no more effective advocate for this cause than these kids. 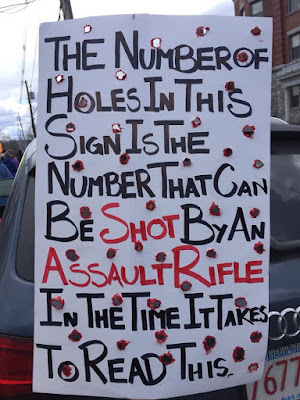 They don’t need ANYONE to tell them what to do. They understand the 2nd Amendment and know enough not to demand the end of gun ownership, contrary to what the NRA’s scare ads want you to believe. They know that semi-automatic rifles and high-capacity clips are not necessary for hunting, home defense, or ANYTHING of a useful nature. There are more than enough Standard rifles, shotguns, and handguns to keep people’s homes and loved ones effectively defended.

Conservative websites are serving up tinfoil hatted propaganda like this: 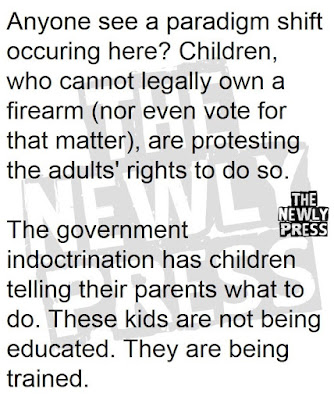 This is so wrong-headed, I can only assume those who share it on Facebook think, “Wow, he said ‘paradigm shift.’ He must be smart, so this must be right.”

The obvious, gaping, too-big-to-miss black hole is that regardless of whether children can own a firearm or not, THEY ARE THE ONES GETTING SHOT WITH THEM! That gives them every right to protest the destructive power of these weapons of war sitting in civilian hands.

Further, give me one example of how the big, bad, government is indoctrinating children into telling their parents what to do. Other than teaching actual science to fundamentalist offspring, I mean. This is the raving of people who have spent so little time in school, they have to make up outlandish conspiracy theories about what goes on in one. 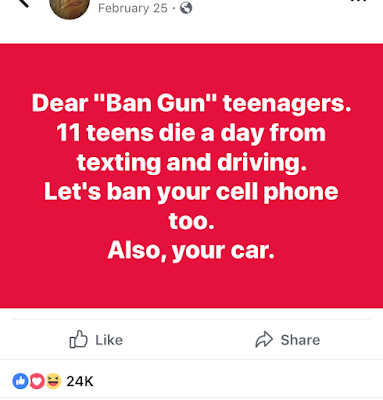 This is a textbook invalid analogy. Both cell phones and cars have common and beneficial uses, so there are rules and laws in play to guide the behavior related to using them. Semi-automatic rifles have only one purpose: to obliterate anything the user shoots at. There is no benign use or necessity for these guns.

See, they HAVE to resort to misleading statements and strawman arguments because they can’t win on the facts. They HAVE to claim the very heart of the 2nd Amendment is at stake, (when it’s clearly not), or else gun manufacturers’ profits might dip. That’s what you do when you can’t win an argument; you argue the case that you think you CAN win.

That doesn’t make it valid, however.

And when a powerful organization like the NRA finds that things are suddenly not going their way, the way they have paid good money for things to be, they’re left with having to navigate through the icebergs of their own rhetoric. 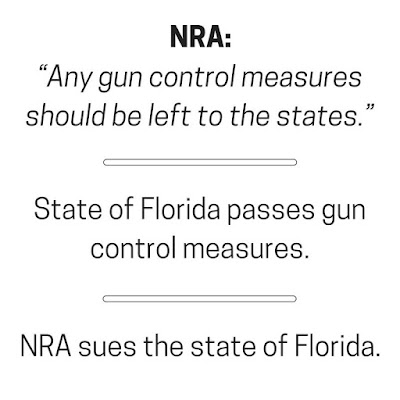 Nope, no double-standard there… Like Republicans have shown with the gay marriage issue, they’re only for “State’s Rights” when states are doing things the GOP likes.

Last weekend, I watched a special on the civil rights movement, featuring a ton of news footage. While that movement and the one formulating now have many differences, I notice one useful similarity.

Under Dr. King, protests were designed to be peaceful, yet provocative enough to elicit violence on the part of the racists. The idea was to make the bigots show their true selves.

The Kids are doing that now. They are provoking a seemingly respectable section of the population… businessmen, congressmen, state officials, and garden-variety gun enthusiasts, into showing the lengths they’ll go to keep the status quo, regardless of the casualties.

Children were stalked, shot and killed, and those who survived are being vilified for daring to ask for better.

All so gun-fetishists can go out in the woods and play Rambo and businesses can profit from them.

Enough is enough. These brave kids need to carry this momentum into November and show up at the polls on election day, to vote out any MFer who puts NRA dollars ahead of schoolkids’ lives.

That’s the only way any of this will matter.
Posted by bluzdude at 6:49 PM

Emma Gonzales for President! She is here.
There is no future without her.

Emma and the rest of the Spokeskids have shown remarkable poise and bravery in the face of the slimy attack from those who see an unflinching enemy.