Sweetpea and I spend every weekend together, to the point that her place feels like my vacation house. But that’s for me, of course, and not her. She still has her chores to do and I help out where I can.

I’ve managed to carve out an odd niche for myself, because I have a skill that you wouldn’t expect a guy like me to have.


You see, when she does her laundry, I’m in charge of folding her underwear. I’m the Underwear-Folder in Chief. I’m the Duke of Drawers, the Prince of Panties, and the Houdini of Bikinis.


I came by my underwear folding prowess honestly. Back when I was married, (cold chill runs down spine), Future-Ex schooled me in the precise way she wanted her undies folded when I did the laundry. It was a simple method, and it stuck. I even do my own the same way.


The trick with Sweetpea was convincing her that I was really just trying to help and this was something I could do, as opposed to merely entertaining some kind of underwear fetish.


But I have learned a lot about the nature of a woman’s underwear choices. Apparently, there are different cuts and textures to go with different kinds of outerwear. Or weather. Or moods.


This came to light when it was time to put the undies away. Rather than keeping them in some kind of orderly manner, she had them in what Liz Lemon, on “30 Rock,” referred to as “the underwear ball.”


I recoiled at placing the clean, nicely folded undies into a drawer full of lacy anarchy. So, over the course of a couple of days, I made it my business to fold every piece of underwear in her drawer, for easy retrieval of any particular style. 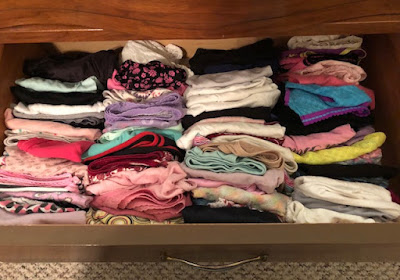 That’s a lot of underwear.


I was stunned that one woman could possess so much underwear. (Because I had to know, I counted 80 pairs.)


Contrast this with my meager collection of around 16. My only goal was to have enough to work with a 2-week laundry cycle. So rather than the Underwear Ball, or Drawer of Anarchy, I have my neat little underwear stack. 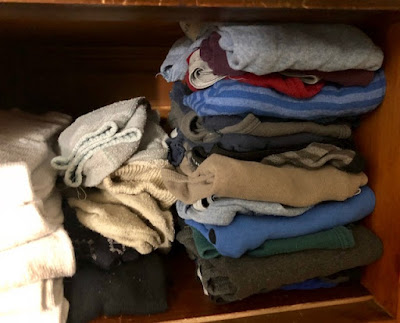 Undies to the right, stack’o socks to the left. (And slipper socks in the middle.)


I have three distinct brands, which I rotate evenly through the stack. (Not by design, it just worked out that way.) As a man, I needn’t worry about which kind goes with my pants. They all work under jeans.


And while I’m on the subject of men’s underwear, let me say this: I am philosophically against boxers or boxer-briefs. I cannot, for the life of me, figure out why the top section of a man’s thigh needs an extra layer of fabric around it. Hence, my stack is composed entirely out of briefs. In fun colors.


Director’s DVD Commentary: Sorry for the short post. I’m temporarily rousted from my apartment for a couple of days, while they make some repairs. Because I have to post this from my iPad rather than my home computer, I wanted it to be short and sweet. Or as sweet as a post about underwear can be.

You must know the T shirt potential of: DUKE of DRAWERS; PRINCE of PANTIES and, especially, HOUDINI of BIKINI.
Great conversation pieces, if you haven't much to say.

If only malls were still a thing and I could go to Spencer Gifts and have some made up.

Then again, I have a whole closet dedicated to t-shirts. I really need to cut back.

By all means, Be BRIEF!