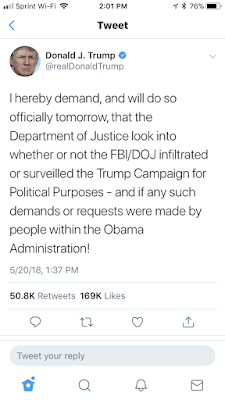 We, the People of America, hereby demand that you read the goddamn constitution, or at least have someone else who knows how to read, explain it to you. Merely using King’s Court language does not confer kingly powers upon you. Also, may I remind you that the Justice Department is an independent body and does not serve as your personal hit squad, so you’ll have to smite your enemies using your own resources.

If you’re worried about the cost, just book another visit to your club in Florida. The windfall from that taxpayer-funded trip to your own property should be enough to keep you flush with shysters and goons for the foreseeable future.

Lastly, to fully understand that last part, please have Rudy or Sara explain to you what sarcasm is.

Jesus… to think that they called Obama the “Imperial” president.

Debunkery
With yet another school shooting under our belts, here come even more gun-mania alibi memes… 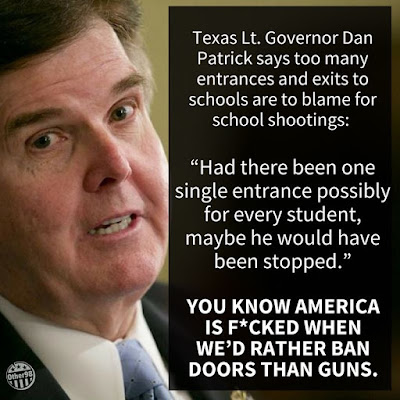 Mr. Patrick takes the award for the Asinine Comment of the Week Award with that beauty.

Sure, one entrance might be easier to defend against people coming in. But did anyone ever consider how a single door is going to work with everyone trying to get out?

Do you remember that Who concert in Cincinnati, back in the late 70s? The crowd waiting outside the arena, upon hearing the band start their sound check, tried to rush the one or two doors that were open and eleven people got trampled to death.

Granted, they were going in, but it’s the same principle: a large crowd of people trying to pass through a single choke point. That’s a recipe for carnage, even without some maniac firing shots.

What if the shooter, having smuggled in a semi-automatic weapon, counted on the mass of people forming at the doors and opened fire into a densely packed crowd of kids?

Or consider a shooter stationing himself between the only door and all the other students. Fish in a barrel, man.

Yeah, brilliant idea, Dan. It just goes to show how people will say the stupidest things, just to avoid crossing their overlords at the NRA.

As a public service, I will provide, via The Daily Show, this handy translator for use in deciphering the clichés and doublespeak coming from the gun apologists. 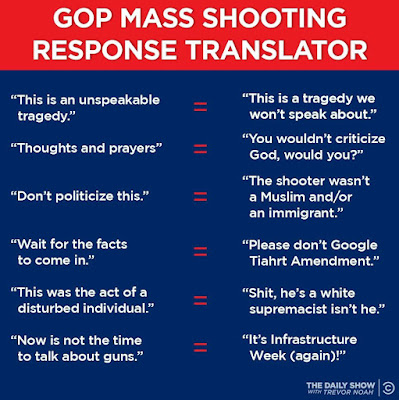 If they can widen the scope of this translator, we may be able to use it to completely replace the current White House Press Secretary. 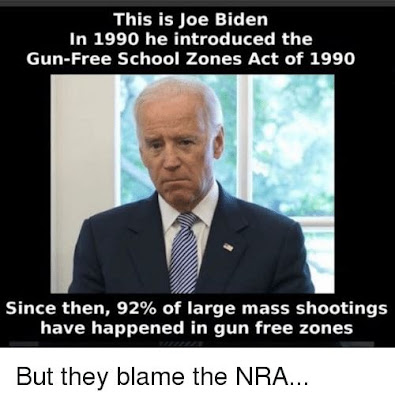 There are two major things are wrong with this meme.

First, it’s a textbook example of a logical fallacy, which states, “Item ‘A’ coming before Item ‘B’ is not proof that A caused B.” For example, you could also say, “The Berlin Wall fell in 1989. Since then, 92% of large mass shootings have happened.” Or, “Bluzdude moved from Cleveland to Albany in 1990. Since then…”

The order in which two items fall on a timeline is not evidence of causation. Period.

The other issue with this meme is that it’s not like the schools were riddled with guns before 1990. Basically, there were few, if any, guns in schools before 1990, and few, if any, afterward. Therefore, there is no causation, or even correlation, that creating “gun-free zones” had anything to do with the increase in mass shootings.

I’d say you’d have to look at the proliferation of semi-automatic weapons among the general public as a major factor, especially in the years since the congressional Assault Weapons Ban was allowed to sunset during the Bush Administration. It stands to reason that the more military weaponry in the hands of the public, the higher the likelihood of one of these killing machines finding its way into the hands of some kid with a lethal grudge and lust for infamy.

But you won’t find any Republicans copping to that truth. The hell with the young lives lost, admitting something like that might cost them re-election.
Posted by bluzdude at 6:18 PM

but be sure to read the Constitution aloud to parents, family and friends. Mr. Trump has no power to 'hereby demand' anything.
We are the demanders. He is the demandee. When he acknowledges that fact, we will again have a democracy.

I'm sure the Republicans would love that... then they can cut more money from education and reap the rewards of being better able to manipulate an insufficiently educated population.

The man is an idiot who seems to think everyone else is a bigger idiot. The graft, corruption, and stupidity are running amok.

The "For Sale" sign is waving high above this White House.

and the emperor inside is naked