If They Only Had a Brain

I went fishing on Facebook again this weekend and ran into a number of examples of some people living in a world entirely removed from reality. How nice it must be for them to create a world where they’re the heroes battling a bunch of dastardly villains who would like to ruin their way of life.

Granted, we Democrats probably think that too, but luckily we have verifiable facts on our side. And science.

I guess the thing that gets me so riled up is the gross delusions they have about “us,” the “enemy.” Obviously, it’s easier to whip up resentment over cartoon-level evil rather than reasoned activities that run counter to one’s own preferred narrative.

For example, in this meme from a conservative friend, there’s nothing written that’s true. 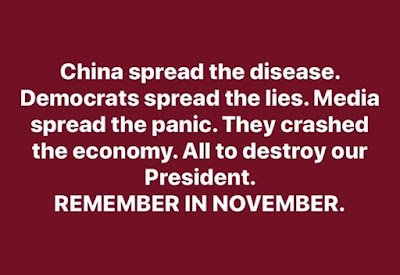 “China spread the disease.” Well, in China, yes. And then some Chinese came here before Trump closed the borders. But he only closed the borders for Chinese… many Americans came home from China carrying the ‘Rona all over the country because a virus doesn’t distinguish between nationalities when it infects someone.

And then once it was here, the federal government didn’t do a single thing to prepare for or stop the transmission of the virus, other than pretend everything was OK.

There’s also a good likelihood that the writer is implying that the virus was engineered in Chinese labs, a claim that American scientists have debunked, with prejudice. They can tell an engineered virus from a naturally occurring one, and the opinion among scientists is unchallenged (other than by idiots who desperately need someone to take the blame.)

“Democrats spread the lies.” What lies? If they’re talking about initial conclusions about the virus that didn’t pan out, hey, that’s science. It adapts to new data. At the onset of an outbreak, data is in short supply. Science self-corrects as time goes on. It’s a feature of the system. Calling an initial scientific prediction a lie is a willful overreach.

“Media spread the panic.” They’re confusing “panic” with attempts to educate people on virus transmission and mitigation practices. It would have been journalistic malpractice to ignore this story or to whitewash it to the satisfaction of the Trump Administration.

"They crashed the economy." Who is "they?" What crashed the economy was the refusal to fully plan for and address the pandemic in anything but superficial terms. When we first locked down, nothing was done with that time. Other countries instituted aggressive testing and tracing. We did not. Now they're basically over it and we're banned from their countries. The economy is never going to heal until the threat of the virus is gone. That was true in March and it's true now.

“All to destroy our president.” Yes, to date, 141,455 Americans have died to “destroy” your president. They and millions of people around the world are all pretending to get sick or die because of political gamesmanship. This is stupid beyond words.

“Remember in November.” We most certainly will. And when the history of this administration is written, it will be done so in the blood of the dead who wouldn’t have had to die if it weren’t for the indifference of Donald Trump and the enablers who prop him up. All he had to do was what the leaders of every other civilized country did: take responsibility and act in the best interest of their citizens.

Here’s another one that’s practically the poster-child for “strawman arguments.” Ray Bolger would be impressed. 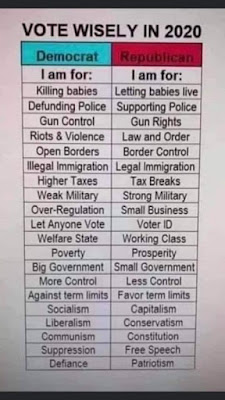 Let’s look closer, shall we?

Killing babies vs Letting babies live. Complete misnomer. Any time two particular cells intersect they call it a baby. It’s not. They’re just using loaded language and imagery to distort the liberal position that the pregnant person is the only one who should decide whether a baby gets carried to term, not politicians, religious fanatics, or any other busy-bodied do-gooders.

Defunding Police vs Supporting Police. I guarantee they think defunding the police means not having the police, which nobody is proposing. Democrats will be happy to support police that doesn’t beat the shit out of unarmed, restrained civilians. Or shoot first and plant evidence later. If the police stop doing that, we have no more problems with protests.

Gun Control vs Gun Rights. They don’t specify hear but the common sentiment is that the Democrats want to disarm people, which is incorrect. Democrats would like to eliminate military hardware and high capacity clips, which (still) have no business in civilian hands.

Riots and Violence vs Law and Order. They love to focus on the riots, but somehow, it always seems to turn out that the people getting arrested are the right-wing white supremacists. And it’s easy to clamor for “law and order” from one’s overstuffed couch in a white-bread community. If these people were ever treated like people of color are every single day, they’d be out there protesting too.

Open Borders vs Border Control. Illegal Immigration vs Legal Immigration. More lies. Democrats want a sane immigration policy, wherein people can actually immigrate. Republicans have shown us they’re version of border control, which means “only the white people may enter.” I mean, where are the complaints about our open border with Canada? There are none because Canada is not sending us brown people. (Or anyone, nowadays. Now, it’s Mexico and Canada (and Europe) who have sealed their borders from us!) Way to go, Donnie!

Higher Taxes vs Tax Breaks. I can’t believe the audacity to even include this as if it applies to the average citizen. Democrats want to raise taxes on the richest of the rich and cut taxes for the other 98%. The last 50 years have proven that trickle-down tax cuts don’t work for those who are supposed to benefit from the trickling. But if you put money in the hands of the lower and middle-class, we will spend it. That sends the money back into the economy and benefits the rich, poor, and everyone in between. Demand for goods and services is the only thing that gets a business to hire more people. Handing the money straight to the top benefits no one but the top.

Weak Military vs Strong Military. No Democrat is for a “weak military,” but that doesn’t mean we have to continue to overspend the way we do. We outspend the next 12 countries combined in military spending. We can do better and not lose a bit of necessary firepower.

Over-Regulation vs Small Business. Regulations are the only things that keep businesses from abusing those that work for them and the world that surrounds them. Republicans can go on pretending that Trump is cutting regulations that strangle small businesses. But what he’s actually done, and every Republican will continue this, is ease regulations on what companies can dump into streams and belch into the air. Because to restrict such pollutions costs money. Maybe one day, Republicans will figure out how to breathe money, but until then, they are killing this planet with manmade waste.

Let Anyone Vote vs Voter ID. Another lie. A true statement would be “let any citizen vote vs keeping likely Democrats from voting by requiring IDs that come from places they’re closing in urban areas, in scarce voting precincts with even scarcer voting machines.” It’s not just about the ID, it’s a full-scale, coordinated attack on voting rights, all to combat a threat that doesn’t exist.

Welfare State vs Working Class. Don’t look now but the working class and the welfare state are basically one and the same, and will stay that way until a living wage is seriously addressed.

Poverty vs Prosperity. What kind of phony-baloney crap is this? No one’s “for” poverty. Everyone wants prosperity. We just have different ways of getting to it. And the Democrats’ way scares the hell out of the 1% who run this country, so they manufacture bullshit like this to rally people dumb enough to fall for it.

Big Government vs Small Government. More Control vs Less Control. I’d call it “Effective Government vs Gutting Government and selling it off for scraps.” Democrats believe there’s a role for government to play in providing safety and guidance for all citizens. Republicans look at it as a barrier to their screwing everyone for their own benefit. Hence, the smaller the government, the more businesses can loot the treasury and trample everyone else in a race for greater profits. You see the state of COVID-19 in this country? It’s the inevitable result of a “small government” philosophy. They’d rather the country swirl down the tubes than admit that it takes federal leadership to combat the pandemic, because it goes against their dogma.

Against Term Limits vs Favor Term Limits. Completely made up. No politician of any flavor is for term limits, not until they’re out of office (or trying to get in). Show me anywhere in any Republican platform that asks for term limits.

Socialism vs Capitalism. The older I get, the more Socialism appeals to me. All I see from Capitalism is everyone screwing everyone else just to make a buck. Or a million bucks. But even so, there’s a small faction of Democrats pushing for Socialist actions but not the mainstream. The thing is, we already have “Socialism” all over the place, from Social Security on down. It’s not the boogie-man, but it IS something the 1% are deathly afraid of so they work hard to make you afraid of it too.

Liberalism vs Conservatism. Why is this even here? This is implied with the heading “Democrat” vs Republican.”  Looks like list padding to me, as does the rest of this list.

Communism vs Constitution. Democrats aren’t for Communism, sorry Archie Bunker. And if Republicans are so interested in the Constitution, why are they itching to violate Portlanders’ constitutionally- granted rights to assemble? Or applying poll taxes like in Florida? Or overlook their president who has been in violation of the Emoluments Clause of The Constitution since the day he took office.

Suppression vs Free Speech. Again, who’s suppressing people’s free speech in BLM marches? What Republicans don’t like is having to take responsibility for when their free speech leads them to say something stupid. Maybe they should look up what “suppression” means. I’m pretty sure some of it would look like unidentified military forces scooping people up off the street and taking them away to parts unknown in unmarked vehicles.

Defiance vs Patriotism. Only to Republicans would these traits be in conflict. What greater patriotism was there than the defiance of our forefathers against King George? They don’t understand that real patriotism goes deeper than a flag, or lapel pin, or standing for a song.