Yesterday I went to the high school graduation of Pinky’s niece.  I haven’t been to a graduation in ages; probably not since my brother’s from Ohio State.

Boy, has a lot ever changed.

When did high school seniors get so freakin’ young?  These kids were babies!  Who decided to turn these children out into the world?  Surely we were never that young when we graduated, right? These three babyfaces are L-R Billy G, yours truly, and Rik, aka Chairman of Fuck Off.

OK, so maybe that hasn’t changed, only my perspective has.

Sitting in that gymnasium brought back so many memories of the end of my senior year.  I’d say from that spring, through the start of college in the fall, was the best time of my life.  I’d discovered four solid friends, with whom I’d go through thick and thin.  We created this incredible bond together, while hanging out in our Barn, and it sucked in the whole neighborhood.

I remember that feeling, starting around April, when as a senior, you realize that you are just about done with this part of your life.  It was as if I had just stepped on a giant paddlewheel ride, and once aboard, it was going to keep turning and like it or not, you were along for the ride.

I was already accepted into my first-choice college, (Yo Bowling Green Falcons, represent!); I had enough credits in the bag to graduate before the semester even started, so my last semester’s classes were pretty much irrelevant.  I could have bombed them out and still breezed straight through to college.  Of course, I had too much pride to do that.  I was a National Honor Society member, after all.  (Note the yellow cords in the first picture.)

All I really had to do was not do anything stupid or get kicked out of school.  Of course, my buddies Rik and John (aka VP of Hell No); were different stories.  I don’t remember what it was they did during the last week of school, (there were so many incidents to choose from), but I think it might have been getting caught sneaking onto school grounds, with mischief in mind.  Anyway, they got in serious trouble and had to sweat out whether the assistant principal would let them graduate with the rest of the class.

And the prick really made them sweat, too.  When we were going through graduation rehearsal and they were calling our names to assign our seats, he called my two buddies dead last.  They were sure they were going to be kept out.  But I wept for them, not a bit.  Much to my chagrin, John got seated between two knockout girls, one of whom was my physics lab partner, the other I’d worked with in Chemistry and had been completely smitten with since sophomore year.  Bastard.

So much goes on that last month.  You’re sending out invitations, ordering your robes, trading “graduation cards,” getting your yearbook signed, picking out what to wear, and Senior Skip Day, which for us, usually consisted of a trip to Cedar Point.

It was during this time that I skipped my first and only high school class, and it was a freakin’ study hall.  (I was such a responsible student.)  But we had a plan to assemble over at John’s house to do an hour’s worth of drinking, before coming back to school.  John said he had the gin, Billy G said he’d bring the mixer.  And the damned fool brought Mello Yello.  God, it tasted like ass.  Needless to say, we didn’t cop much of a “B” that day.  Bleah.

In later years we weren’t so discriminating.  I remember one evening over at my buddy’s place and all we could come up with to drink was gin and lime Kool Aid.  That tasted like ass too, but it got the job done.  We called it, “Gang Green.”

Another ball we had in the air was Billy’s idea for us all to wear our suit jackets and shirts with shorts under our robes.  I wrote about that in detail before, as it was one domino in a long string of practical jokes.  Suffice to say here, my dad put the kibosh the whole idea, saying, “You will NOT embarrass this family at graduation.”  So I didn’t.

Either Billy didn’t get the memo, or he didn’t care, because he did it anyway and caused a great deal of murmuring and tittering among the crowd when his robe opened up on stage and his big hairy leg poked out as he walked across the stage.

Anyway, we all got through it.  We reassembled at our house for post-graduation dinner.  Thinking of it now, I wonder why the guys didn’t have their own family plans.  It’s possible that having had my mom’s homemade spaghetti before, they let that saucy goodness sway their plans. 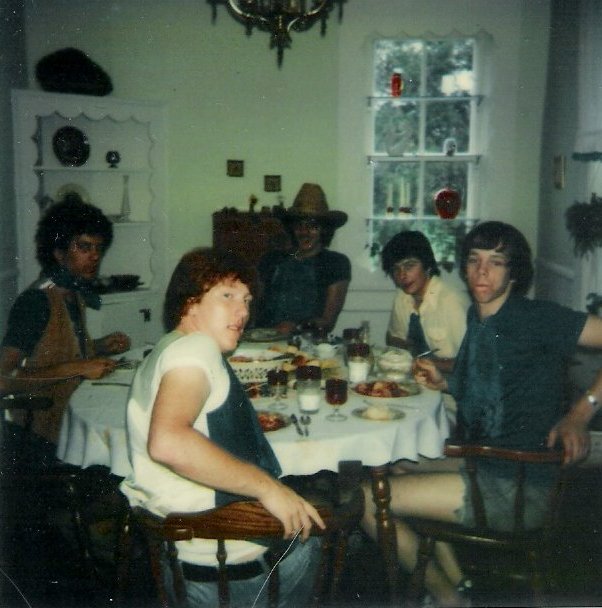 From far left, clockwise: Billy G, me, Brill, John and Rik.  It’s not every day you see five dudes drinking both milk and wine, from matching glassware.

Geez, we looked like babies.  But we felt so grown up, like it was time to be an adult now.  Luckily, that feeling was temporary, because we spent the summer doing very un-adult-like things.  Like I said… best time of my life.

In sitting at the graduation yesterday, one thing I noticed was the tech, which was considerable.  This college gym had more tech in it than the fully functioning concert hall in which we held our graduation in 1979.  We didn’t have any video screens, that’s for sure.  This gym had 4 different screens and video cameras everywhere.  Someone was controlling the shots on the video screens like it was a U2 concert.  Very snappy. 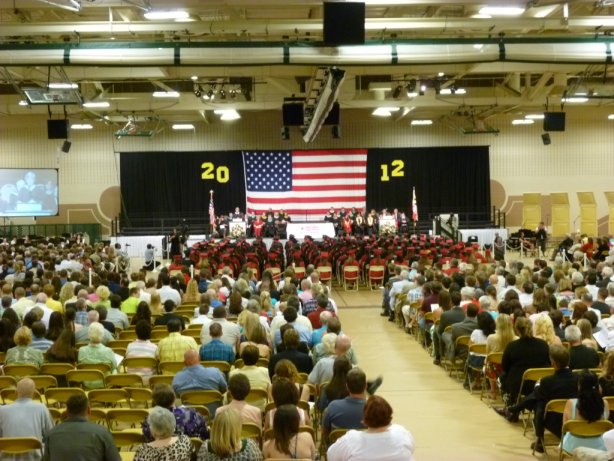 And right when they came off stage, there was a photographer set up to take their picture, before they went back to their seats.  Plus, it was all being recorded, so you could buy a DVD of the whole affair.  Man, what I wouldn’t give to see Billy’s hairy old leg sticking out on stage again.

I also noticed that there was a specific time for all the grads to turn their tassels together.  When I graduated, we were supposed to turn the tassel individually, right after we were handed our diploma.

My seat mate was so sure she was going to forget to turn her tassel, she made me promise to remind her right before she went up on stage.  So I reminded her and she turned her tassel on time.

I, however, completely screwed the pooch and forgot to do it until I was back at my seat.

But not to worry.  I had all summer to recover from the setback. 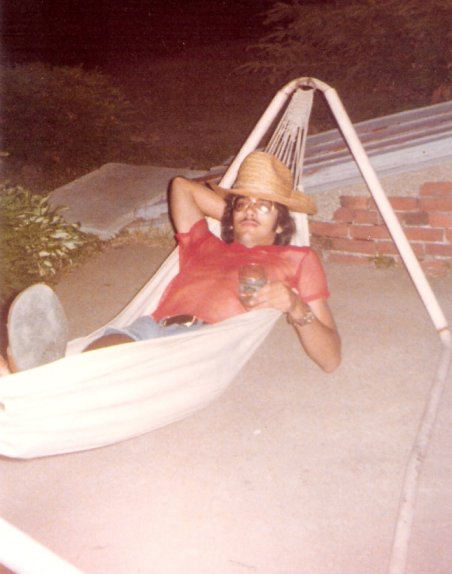 Rocking wine in the hammock.  That’s pretty adult, right?  And no comments about the mesh shirt… it was the 70s, for cryin’ out loud.  Nobody had any taste.

Man, my only concern with a hammock now is whether I would be able to get back out of it without getting tossed on the ground.  I mean; I could break my hip…

Nothing like being young and fearless…
Posted by bluzdude at 12:07 PM

Yep. Rik asked for a glass of milk and I thought, "omigod, the Wave of the Future! HELP."

If only they had the "Got Milk?" spots back then...

The older I get, the harder it is to figure out how old "kids" really are. I am usually off by a good five years.

I actually missed the mesh shirt, but nice glasses and rockin' hat!

I think I embraced every stupid clothing fad of the late 70s, from silk shirts, to urban cowboy attire, to stupid mesh shirts. Of course, I was still pretty lean, so I pulled it off. But that doesn't make it any less embarrassing.

Nice stache! For some reason I don't think the guys were allowed to have facial hair in high school. Lame, I know.

At least it wasn't neon mesh.

Gin and lime Kool-Aid sounds like something you'd get in a hipster bar in Brooklyn for $12 a glass.

We could have mustaches, but beards were strictly forbidden. In fact, I did some investigative reporting about that for the school newspaper. Administrators told me it was left over from 60s backlash, when the grownups didn’t want any long-haired dirty hippies in their school.

I argued that it was a different time and well-kept beards should be allowed, and wrote it up that way. Sadly, nothing changed, at least while I was there.

Oh, come on. I didn’t even have a good one yet! Mr. Kotter had one of those big caterpillar ‘staches. Mine was more of a cookie duster.

No, it wasn’t neon, but it was still pretty bright. I actually wore it to school on occasion, the worst of which being the day they took our National Honor Society group pictures for the yearbook. (Obviously I had no idea it was happening on that day.) So I stood in the back and hid as best I could, which was hard to do at 6’3”.

How is this post Ohio-y? I didn’t think my tales of delinquency was particular to Ohio…

The eye wear, the 'stache, and the cowboy hat make for a great time capsule. It's like Urban Cowboy meets Neil Young meets The Village People. Nice.

I always loved teardrop-shaped glasses. I don’t know why I was wearing the straw hat, but then we were out in the country… The ‘stache was the best I could do. And that was a whole lifetime’s worth of not shaving my upper lip. In fact, it has never been shaved, to this day. I don’t think I have the DNA for one of those big walrus-Wilford Brimley moustaches. The only thing that would happen if I stopped trimming mine is that it would grow down over my mouth, and I’d have to start straining my food, like a baleen whale.

BLUZ. A MESH SHIRT. FOR REALS.

That's really all I have to say.

It was the SEVENTIES! People wore weird shit. Plus, I had a good body back then. If I tried that now, I’d look like an old stripper’s thigh.