Can You Really Call it a Conspiracy When it Happens in Plain Sight?

As we find ourselves being consumed by the COVID-19 pandemic, we need to remember these moments when the Republican leadership is showing us who they are and what they care about.

Look what they’re doing right now, aside from NOT passing an effective pandemic relief bill. And I don’t just mean Trump! Mitch McConnell is obsessed with eliminating employer liability, (a long-time Republican dream). He is insisting that the next pandemic package contains immunity for employers who force employees to come back to work, don’t supply PPE or take reasonable precautions, and then see their employees get sick.

It’s no different than requiring employees to work around dangerous machinery without providing guardrails or kill switches. Then they don’t want to be sued when someone gets sliced and diced? In the old days, OSHA would be all over them. But now, the GOP Senate is basically throwing them into the grinding gears. They seem to relish going back to the past when employers were bulletproof and could require anything they wanted from their peon workers.

“No one’s forcing them to go to work,” I hear the conservatives respond.

But they are. If the business is open, one can’t claim unemployment, so workers have an impossible decision: stay home, starve, and be evicted, or risk their health and lives to go to work under dangerous conditions. And now the GOP wants to remove the only thing incentive there is for employers to do the right things by their employees.

Republicans could bolster unemployment insurance but that’s the last thing they want to do. It’s against their DNA to just give money to people who need it. In fact, this explains the entire GOP response to COVID... What is required in the moment, to stem the spread of this virus, is that which Republicans are committed to never do. It’s a philosophical impasse that they cannot get around, which leaves them with nothing to offer but things that make matters worse.

Like ordering the schools to reopen, as Trump’s toady governors are doing. As we’ve already seen in the schools that have opened, it’s a clusterfuck. Immediately kids and staff are coming down with the ‘Rona and their classes have to go into quarantine. That’s exactly what the health experts predicted. That’s exactly what everyone predicted aside from the science-denying head-in-the-sand-ers.

This happened because states like Georgia didn’t do the hard work to make schools safe again. They just went through the motions of cleaning some stuff, along with a lot of happy talk about how important it is to get kids back in school. They didn’t spread out the desks or limit class size. They didn’t require masks to be worn at all times. “Safety theater” is what it was, just like we see with the TSA.

They know we don’t need everyone’s shoes to go through the scanner. But they do it to put on a show, to make everyone feel better about flying. The shoe thing came about because one lone guy tried to hide a bomb in his shoe. Good thing he didn’t try to hide it in his ass, or who knows what kind of indignities we’d be subjected to in the name of “safety?”

It is especially galling that this “Pro-Life” party, is sending children straight into what could be a lethal danger. And if not fatal to the children, then possibly to everyone with whom they come in contact. And it’s not like it’s an A/B situation where either you get better or you die. There have already been longer-term ramifications involving ongoing damage to heart and lung functions. And who knows what they’ll find in the years to come?

This is how they revere and preserve life?

Republican politicians and donors have never cared about any human lives except their own. The entire “pro-life/anti-abortion” stance is about controlling women, pure and simple. Because if it wasn’t, you’d see some evidence, wouldn’t you? It would be Republicans clamoring for things that help people: higher wages (minimum or otherwise), or SNAP benefits, or health care for all. The pro-life bullshit is all an act... a pose. It’s a hat they put on when they want votes from evangelicals. It’s like that old bit from George Carlin: 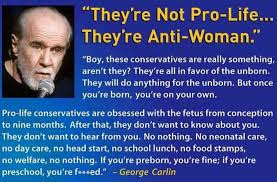 Unlike a lot of other crap that gets tied to Carlin, I guarantee this is a real quote; I’ve seen him do it on one of his HBO specials.

What they care about is money. You think the Koch Brother cares about abortion laws in Louisiana or Mississippi? Hell no. He doesn’t care about anything but what he has to pay for, and then only about how to get out of it.

Which brings us to Social Security. Mitch has been making noise about privatizing Social Security for years. In fact, the only reason he hasn’t done it yet is he hasn’t found a way to make the Democrats take the blame for it. Last year, they were planning to do it during Trump’s prospective 2nd term. They say they have to because of the soaring deficit… which they created with the 2017 tax cut for the 1%.

So that’s pretty clear then, huh? Exacerbate a deficit with a huge tax cut for the rich, remedy it by reducing the Social Security that you and I plan to use for retirement. Sound like a good deal to you? Now add to that the fact that Social Security isn’t even counted in the deficit… it’s a single entity unto itself, and it’s self-sustaining through payroll taxes (which Trump is also trying to cut).

I can’t believe Biden isn’t out there hammering on this issue every single day.

The Republicans will do this stuff because they have zero shame. Nada. They will do anything to acquire, consolidate, and prolong their power.

Remember the landslide of criticism when Mitch decided not to allow a sitting president to appoint a Supreme Court justice, as is the president’s constitutional prerogative? Mitch didn’t give a shit what anyone had to say. He did what his benefactors wanted him to do, made the move, and ignored the backlash. Now look at what we have today. Does anyone still talk about Merrick Garland and the stolen SCOTUS seat? Nope. But Mitch and his crew still have a stacked Supreme Court.

With Republicans, the ends always justify the means.

But they can’t do it alone; they need to get their base behind them. That’s where social media makes it so easy to spread suspicion and disinformation. The Russian troll farms are laughing their asses off at us, at just how easy it is to fragment the country.

Here are a couple of examples I found over the weekend: 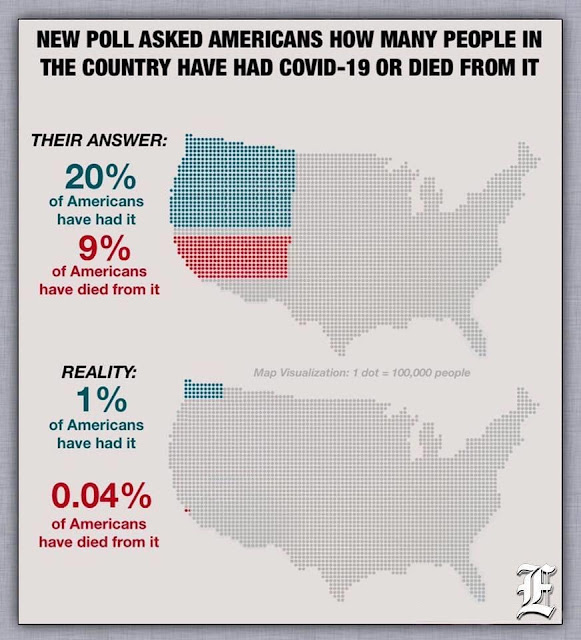 At first glance, this looks damning, right up until you realize that it’s just a poll of what people think. And what it shows is that Americans aren’t good at contextualizing big numbers. This is an attempt from the Right to convince people that 167,000 deaths in 5 months is no big deal. The only problem with that is that it IS a big deal. We went to war over 3000 deaths. We should demand nothing less over a number 55 times higher.

Again, this is the “pro-life” party? It boggles the mind that a group of people will tie up the government over the right to get rid of a grape-sized clump of cells but dismiss 167,000 sentient, human, American lives out of political expedience. 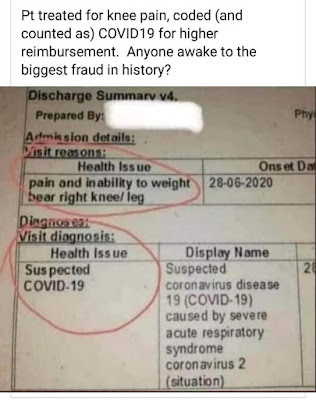 This is another one that looks bad at first glance. The inference is that someone who sought help for leg pain got tagged as being a COVID victim. But is it really evidence of medical malfeasance?

There are three basic debunking paths that I see here.

First of all, how do we know this is a legit document? The fonts show some irregularity. Sometimes there’s a big space after a small “s” and sometimes not. The font seems to be different between the “Health Issue” and “Display Names” fields. All of those are signs of tampered text. Although given the clumsiness of the name blocking, font manipulation might not be in this meme creator's skill set.

But OK, for argument’s sake, even if it IS a faithful copy of an original document, there are two possibilities where this is perfectly normal.

1.      Body aches are a symptom of the ‘Rona. Not the prime ones, but more like secondary symptoms. That would make this a legit diagnosis and neuter any validity to the meme.
2.      The patient could have been an asymptomatic carrier, which makes up 40% of COVID victims. A guy comes in with leg pain from whatever source, they test him for COVID and find out he’s a carrier. Again, a perfectly rational scenario with invalidates the presumption of this meme.

Lastly, what if it IS a dubious finding and someone is trying to pad COVID stats. That’s one place, or maybe even one doctor. Is there any evidence that this is happening all over the country, or hell, all over the world? That would be a surprise to the hundreds of thousands who are freakin’ DEAD from this thing.

And no, that can’t be laid off on every death being lumped in with the COVID deaths. The gross death counts are way up here and all over the world, compared year over year. The variable is the coronavirus. That’s the ingredient that caused the uptick.

So no matter how hard they try, they can’t whitewash the deaths. There are way more dead people this year as opposed to last year, not by a statistical anomaly, but by a fuck-ton. This. Is. Happening.

The only thing we’re gaining from the denial and finger-pointing is more sickness and more death.

Courtesy of the “Right to Life” party.
Posted by bluzdude at 7:10 PM

I'm sorry but your post just made me want to go drown myself.
Carlin said it all didn't he? I've said for years that they are only pro life as a fetus once out especially of color it's a free for all and they don't give a rats ass.

Better not... someone might accuse us of trying to artificially inflate the COVID numbers.

*(The fact that Luca Brazi held a gun to the band leder's head, while Vito explained that either the band leader's signature or his brains would be on that contract in one minute merely showed Vito's negotiating skills.)

Thank you for the much more entertaining demonstration of my point.