Just checking in at the halfway point of our vacation… Short version: we came, we saw, we’re eating all the food.  Long version: here goes…

One good thing about taking an afternoon flight is that it’s much easier for me to get to sleep the night before.  When I have an early flight, I usually lay in bed worrying about oversleeping, or making sure I get to sleep right away so that I’m not overtired.  This is guaranteed to delay falling asleep by 2 hours.

But with a 1:45 flight, I could prep the night before, sleep well, pack in the morning, set sail at the pre-determined time and enjoy an easy trip around the beltway, without any rush hour traffic.

We only had one hiccup at the airport… This was the first time I had to go through one of those body-scanning machines, (they were sending everyone through), so I wasn’t sure of the drill.   I’d already taken off my shoes and belt and emptied my pockets of all metal.  But that wasn’t good enough.  As I stepped in, the dude was all, “Please empty your pocket of whatever is in your left back pocket.”

OK, I didn’t really say that.  I know that if you joke with the security people, they take you right to the smart-ass section of Airport Jail.  So I just took out my wallet and put it in one of those plastic bowls, to go through the scanner.

Then when they scanned me again, they were like, “PLEASE REMOVE WHATEVER IS IN YOUR FRONT LEFT POCKET!”

Gingerly, I reached two fingers in and pulled out… 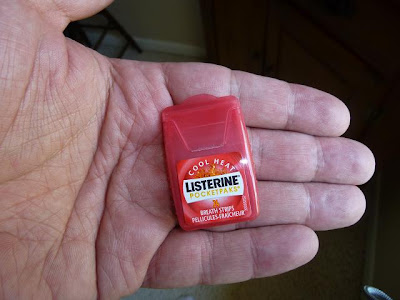 They had to pat me down to be sure that’s all I was packing and then they sent me on my way.  Another aviation crisis averted.

Our plan was to get dinner while we had a layover in Atlanta, but Air Tran messed up my calculations.  I was counting on boarding the plane 20 minutes prior to take-off, like Southwest does.  But Air Tran boards 40 minutes prior, so that carved a good chunk out of our mealtime.  Because we didn’t have time now to have a sit-down dinner, we had to settle for a dash through Wendy’s.

OK, Pinky “settled.”  I was in hog heaven.  I love me some Wendy’s.  But anyway, we got in just fine and the Oldes met us at Security.

I had planned on eating at the airport so that it would be one less meal Mom would have to make, but it didn’t quite work out that way.  We still had a cheese/crackers/pepperoni/olives plate, then soup and sandwich.  I suppose I could have just “not eaten,” but come on.  I could never insult my mother that way.

We got up Friday morning to a most inauspicious start. 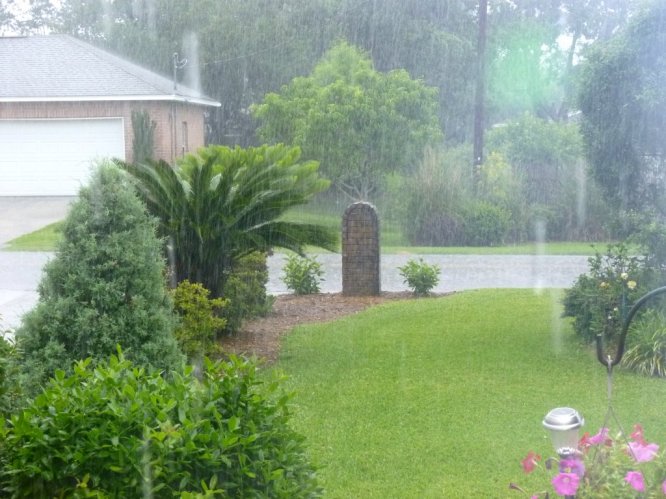 Luckily it didn’t rain like that for very long; in fact it had stopped by the time we arrived at the place we were going for brunch. 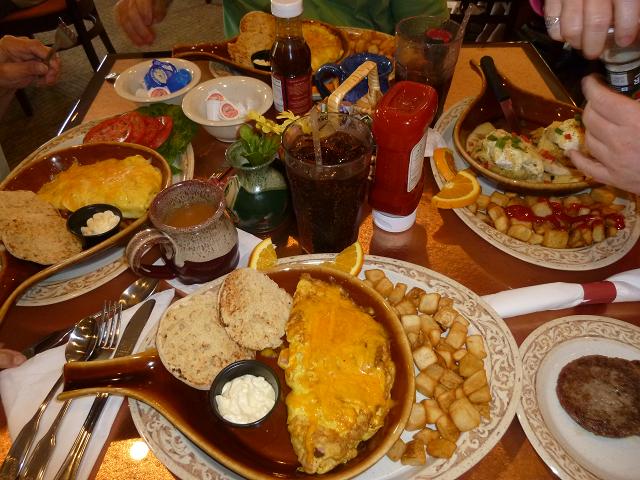 Omelets, courtesy of "Another Broken Egg."

Because it had cleared up, we took a ride by the new ballpark that just opened this spring.  Pensacola houses a minor league AA affiliate of the Cincinnati Reds, called the Pensacola Blue Wahoos. 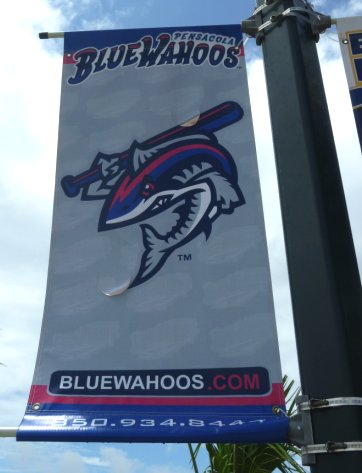 A “blue wahoo” is a kind of fish that’s caught locally.  It also sounds like what you’d call a sad redneck.

I’m not exactly sure of what we’re supposed to call it.  There was no sign on the building, and even online, there seemed to be a couple of names in use.  Mostly, it’s referred to as “Blue Wahoo Park,” but there were also references to “Community Maritme Park,” and even more formally, “Vince J Whibbs Community Maritime Park.”  I’m envisioning Chris Berman, right now, referring to it as “The Big Whibbs.”

Anyway, the park was beautiful, sitting right on Pensacola Bay, holding 5270, including “standing room.”  At first I thought we were just going to drive by, but Dad noticed that the gate was open, so we strolled in like we owned the place and had a walkabout. 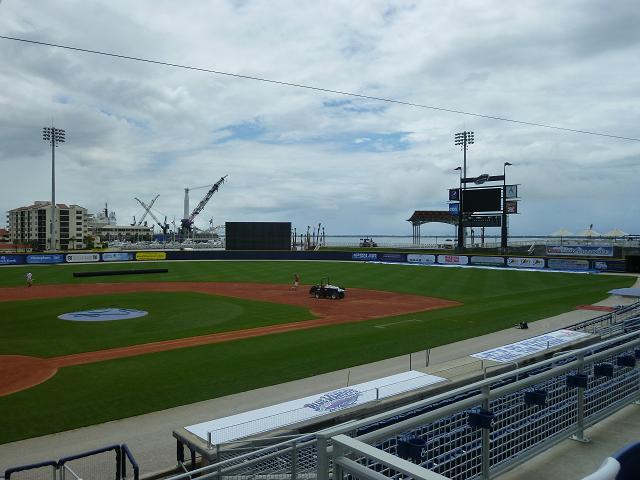 Shot toward the right field wall.  Pensacola Bay is just beyond the wall. 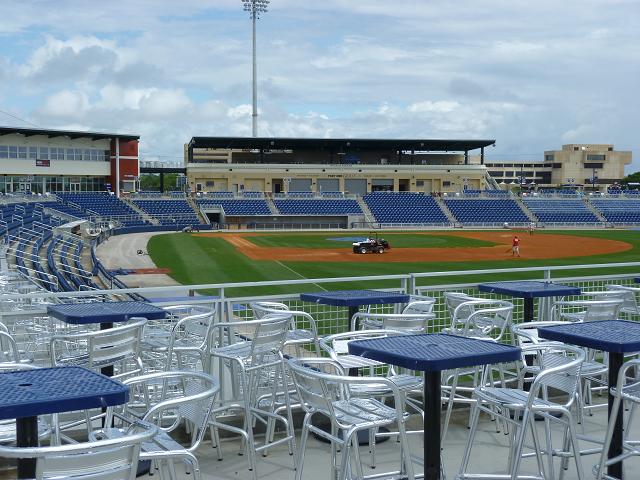 They have a very cool “lounge” area out beyond right field. 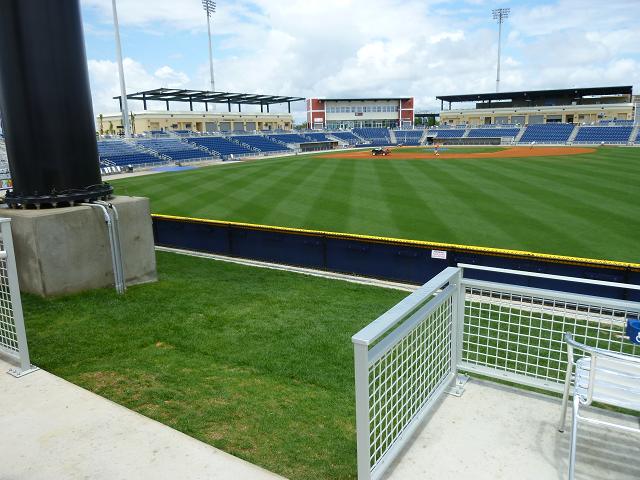 You can also sit or stand on the grass, just behind the outfield wall.

We were prepared to be tossed out, but nobody really gave a crap that we were there.  Little did they know how dangerous I actually was…  After all, I was still packing my Flash Strips.

Once we exited the Park, we decided to mosey down to the edge of the Bay.  Once there, we spotted a couple of blue herons, which were pretty cool.  They even posed for me. 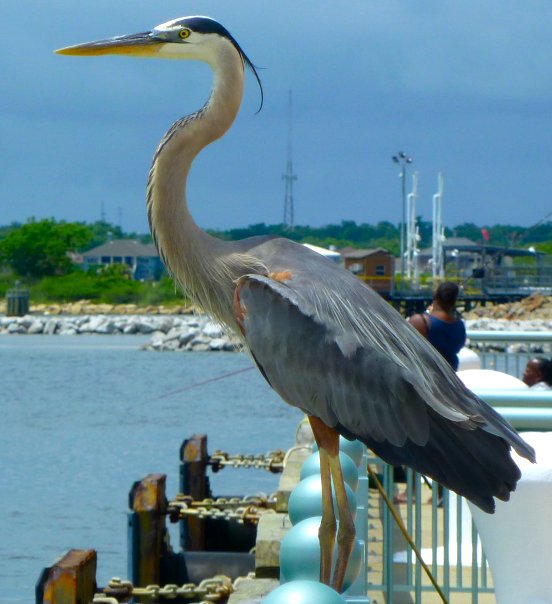 He even gave me the perfect “profile” shot.  Must be used to the paparazzi. 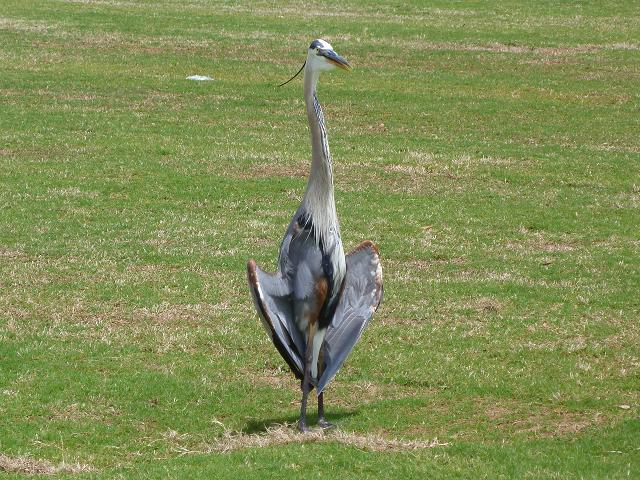 I named this one Chester the Molester.  Totally looks like he’s flashing. 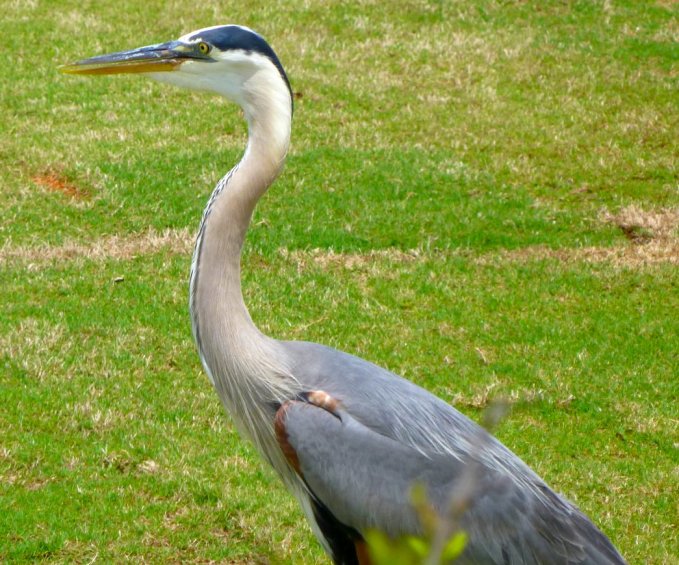 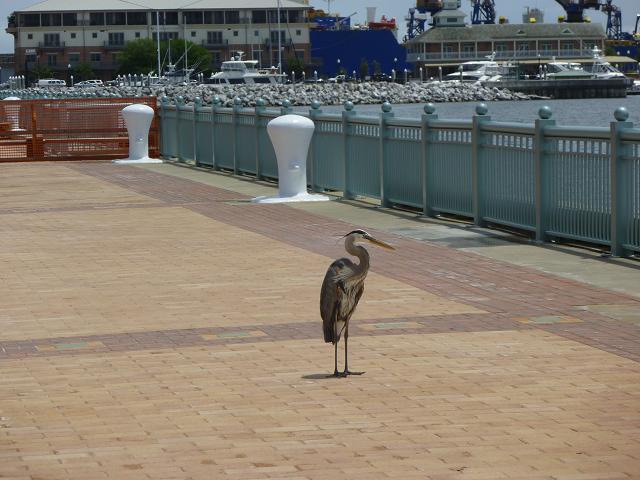 “Just a regular heron, out for a stroll…”

When we got back, it was nice enough for a swim, so out to the pool we went.  Dad pointed out where he had to have a limb cut down from a big tree, so now it looks like the tree is, um, “excited,” 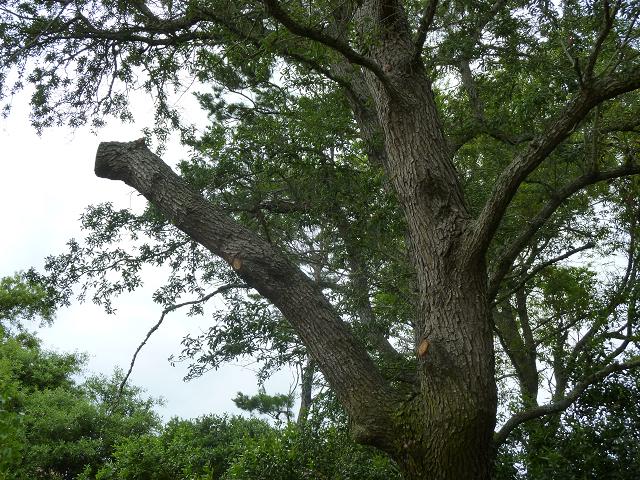 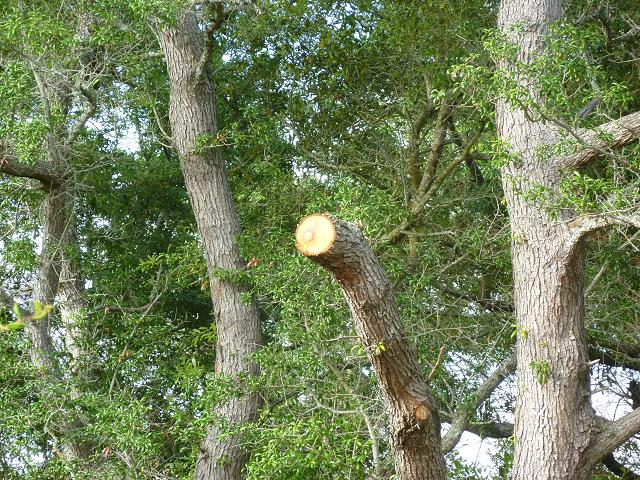 It even looks like it has the hole on the end.

He had to have it cut down, because it was blocking the sunlight from one of his Bradford Pear trees, which was planted to block the sightlines from the apartments behind them.

To go along with the tumescent nature of their back yard, they also have this thing: 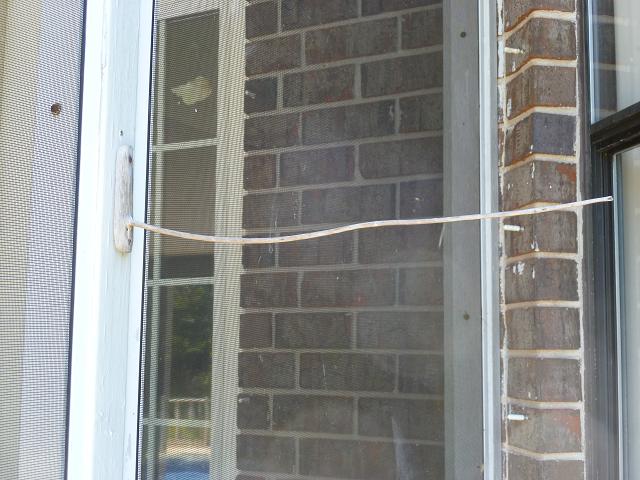 It’s supposed to raise up when the barometric pressure goes up and lower when it goes down.  I asked what that meant in terms of the weather but they didn’t know.  They just liked to watch it go up and down.  Such is the nature of Life in Retirement.

Also, I liked these flowers, (mandavilla), that Bluz Sister had given the folks. 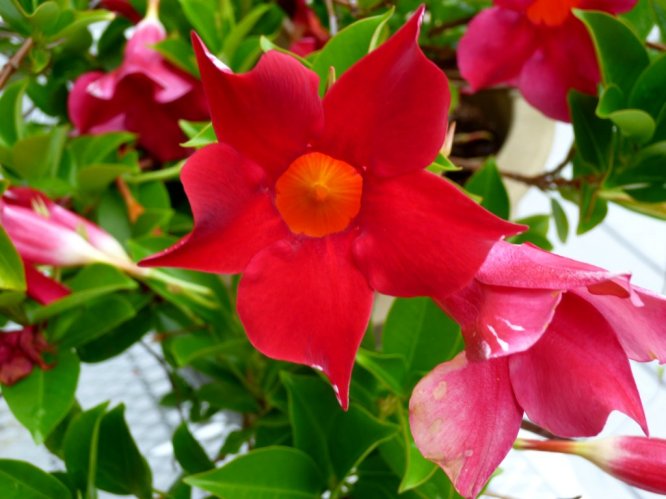 This one will be in my next year’s calendar.

After pool, (and drinks) it was dinner time again, where we assembled for stuffed shells. 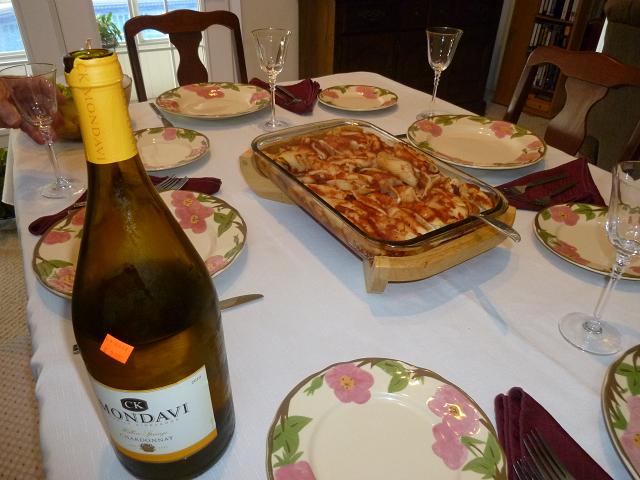 We only ate just over half, so I know we’ll be seeing these again.  (I can’t wait!)

Amidst all our yakking, Dad laid another great story on me, from back in his travelling days.  He was out in Boston, taking in another baseball game at Fenway with his friend “The Lob.”  They were sitting in the lower bowl, about halfway between first base and the outfield wall.

A big power-hitter named George Cooper was up at bat and smashed a screaming line drive right in Dad’s direction.  With beer in hand, he quickly leaned over, in classic “kiss your ass goodbye” position and the ball just grazed his back and landed under some seats.  Out of danger, Dad popped back up, un-spilled beer still firmly in hand, and received a nice round of applause from his section.

You know how you can drop a cat from any angle and it will land on its feet?  My family is like that with drinks.  I think we are genetically programmed to do a front handspring and not spill a drop of our drink.

Evolution is a wonderful thing.

PS. Happy Cinco de Mayo and happy Kentucky Derby Day.  In honor of our Mexican friends, we will be substituting the usual Derby favorites of Kentucky bourbon and mint juleps, with margaritas.  Arriba! 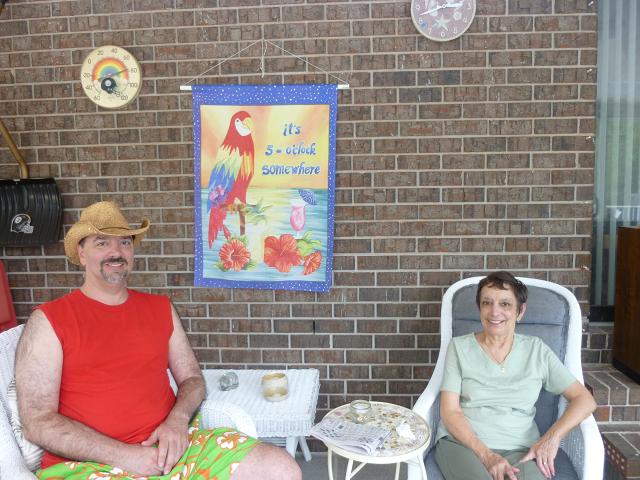