It's Always the Season for Debunkery

Contrary to how it might seem, I’m well aware that people are seldom swayed by logical arguments. All the literature suggests that if you want to change minds, then make an emotional argument that appeals to someone’s feelings. Yet why do I continue to engage in logical debunkery?

Because to me, it’s still important to have a clear delineation between right and wrong, what’s true and what’s false, and what’s valid and what’s bullshit. If you cede the grounds of truth, it’s awfully hard to claw it back. So I try to fight every missed point, every apples to oranges comparison, every instance of stunning hypocrisy, and every meme full of straight-up lies, any time I can. Truth and logic have to matter, or else we’re just a bunch of monkeys fighting for bananas and gibbering in the trees.

This brings me to today’s debunkery, which I picked up from Facebook over the weekend. 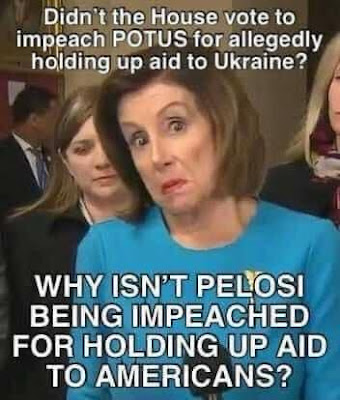 There two very distinct reasons no one outside the Right Wing Bubble talks about impeaching Pelosi over the lack of a COVID response bill.

First off, there is no valid comparison between Trump/Ukraine and Pelosi/COVID bill. Trump interfered in the execution of a Congressional order to supply aid to Ukraine. He stopped it so he could use it as leverage for a personal, political reason. That’s illegal and he was impeached for it.

On the other hand, even assuming Pelosi is responsible for holding up the COVID bill, that’s just lawmaking. It takes both sides to come to an agreement. It’s neither illegal nor impeachable for one chamber leader to hold up a bill for basically any reason. Hell, McConnell has had the House COVID relief bill, and many, others, on his desk since May.

This leads to the second reason, which is that it’s highly debatable that Pelosi is to blame for the failure of a COVID relief bill to pass. As far as I’m concerned, she’s in the right, considering all the poison pills the Republicans have in their bill, from the liability shield for employers who don’t provide anti-viral protection for their employees, to ham-stringing the next Administration’s ability to deal with this and any other financial crisis.

Mitch would just love Nancy to roll over and give him everything he wants, but Nancy don’t play that shit. So why is it that she’s the problem and not him? He could have acted on a relief bill months ago, even if it was just to start negotiating, but half the year went by without even an opening bid. And to listen to some other Republican congressmen, we really don’t even need more money or unemployment, people just need to get a job. But businesses need some more tax breaks, don’t they? 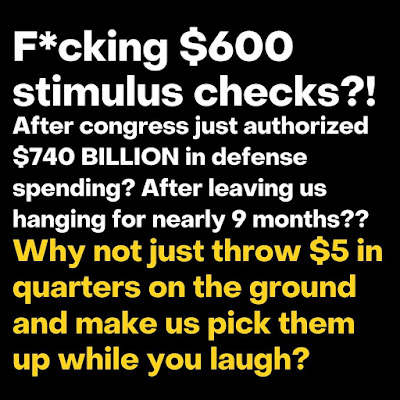 If there’s to be a price paid, it will have to be political, like voting her out of office. (Good luck with that.)

(Note: An agreement was announced this morning that a COVID bill will pass, after the Republicans backed down on their bid to tie up the COVID money that’s been set aside.) 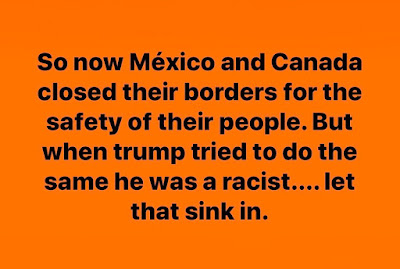 This one misses another giant point as it tries to rationalize right-wing racism.

Mexico and Canada closed their borders to us because we’re an infectious mess. We’re the nation who didn’t take COVID seriously and now leads the world in cases and deaths. This is a classic quarantine situation that is necessary to preserve national health.

That has nothing in common with Trump closing the borders… And Trump has had so many closed border issues that I don’t even know the instance to which the meme creator is referring.

Trump famously tried to close the southern border by building a wall and encaging anyone who dare try to immigrate illegally OR legally. (Check out what happens to people who try to apply.) He’s had a myriad of reasons for this, mostly fear-mongering over gangs or Muslim radicals he says were pouring over the border. Nothing that explains separating children from their families, locking them up, and removing the capacity to get them back to their parents. It’s more like Republicans don’t want any more brown people showing up here (and voting for Democrats.) That’s pretty racist.

Or we could be talking about the Muslim ban brought forth in his first months of office. Declaring that all citizens from any particular country are a threat-based solely on where they’re from is completely racist. There was no effort to filter out legitimate students or engineers or any other skilled labor, just a blanket denial of passage.

Or it could be referring to blocking flights from China at the onset of the ‘Rona, which, unfortunately, was done so haphazardly, the virus came flooding in any way. That wasn’t racist, it was just inefficient and poorly executed.

When a meme finishes with “Let that sink in,” why is it that it’s almost always complete bullshit? 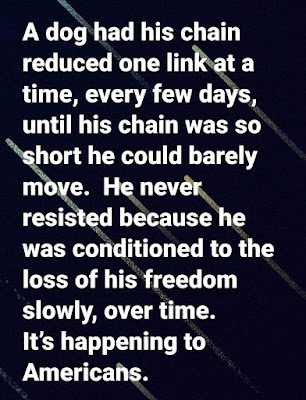 Great, more whiney shit about “freedom.” What’s the endgame here? Do these fuckers want everyone suffering or dying from the virus? All so they can wear their big-boy Freedom pants?

I’ll tell you what… Exercise your freedom and avoid the COVID vaccine altogether. Leave it for the rest of us “sheep” so that there will be fewer shortages. Then you can have all the freedom you want to traipse about the country and swing your big balls all over town. Get all the “freedom” lovers together and just roll around in all that freedom. Drink beer, shoot guns, get tattoos and share beard grooming tips.

And then, when you’re gasping for breath and suffocating, be sure not to have your freedom curtailed in some hospital. Just dig a hole in the back yard and go lie down. Then you and your “freedom” can take a nice long nap.

With freedom comes responsibility; to yourself, to others, to your community, country, and planet. Shared sacrifice brings people together for a common goal that benefits everyone.

You have the freedom to do what you want… why be an asshole?

Thank you for visiting today. I hope you and your family have a great Christmas and a safe holiday season.

Here’s my favorite ornament for this year. 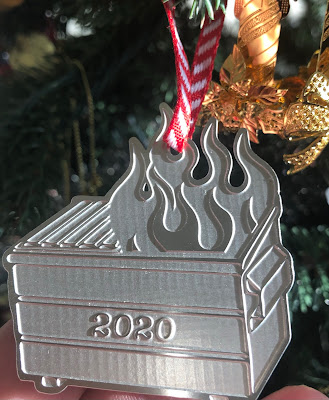 And why look at ornaments without appropriate holiday music? 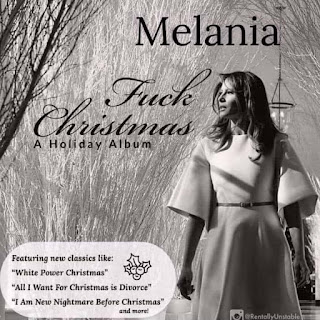 See you next week, to close out the year.

well this was depressing. STupid people abound. I wish trump would take his stupid followers with him to mar-lago. Let them all live in the sunshine state.

Thanks for fighting the good fight, dude.

Freedom means everything, for sure. Wishing you and Sweetpea a wonderful, special and safe Christmas! Hugs, RO

Glad to help, buddy. Thanks for coming and have a great holiday.

Same to you, RO, and thanks for all the comments. Happy Christmas.

They can have a giant Super-Spreader Event there and then sooner or later, they'll cease to be a problem. Will save more vaccine for the rest of us.

Trumpers live in a bubble -- I call it a cement bubble, because nothing will burst it, especially not facts.

Despite what Trump is wrecking on his way out -- pardoning crooks and murderers, we still can feel hope because he'll be gone on Jan. 20, 2021, at noontime. If we're lucky, it'll be forever!

Best wishes for a Merry Christmas and a better New Year!

I'm looking forward to seeing how Biden will react... how far he'll pursue bipartisan progress before he sees the dead end and starts going it alone.

2021 has to be a better year; I don't see how it could get worse, short of a lengthy civil war. Maybe some of these jagoffs can actually succeed in seceding, and thus immediately improve our national educational scores.