I’ve often mentioned that today’s Republican Party has nothing to offer the average (non-rich, non-religious wingnut) citizen but culture wars, fear of brown foreigners, and “owning the Libs.” (All of which, in what must be a raging coincidence, cost little or no money to big business.)

This weekend I reeled in a handful of conservative memes that perpetuate these points. I’ll show you why they’re bullshit. 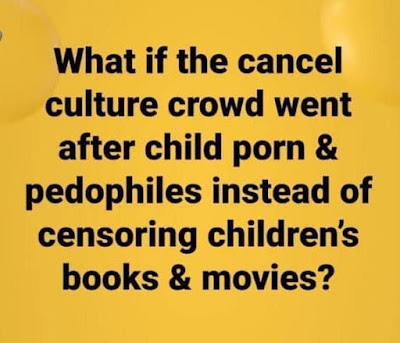 Yes, the dreaded “Cancel Culture,” which Republicans loathe, except when it’s someone they want to cancel, like Alex Vindeman or James Comey. Or Hillary Clinton, Colin Kaepernick, or the Dixie Chicks.

And as for censoring books and movies, who was it that was up in arms about Harry Potter? Or Twilight? Or any book with sex or swear words?

Take the Dr. Seuss thing right off the table because there were no outside forces at work there. The Seuss family and publisher decided to take a few books off the market, most of which I’d never even heard of. (And neither have the people complaining about it, either.)

I keep hearing that Pepe LePew has been pulled from rotation; I have no idea why other than to presume it’s about forcing unwanted attention on someone. Whatevs. I always hated Pepe LePew, by far the weakest of the Loony Toons bunch, just because it wasn’t funny or entertaining. Even as a kid, I used to think, “Leave the poor kitty alone, for cryin’ out loud.” Give me Bugs, Daffy, and Taz all morning long and kibosh the obnoxious French skunk. That’s all, folks. 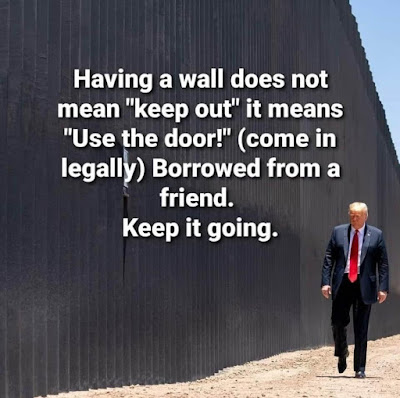 This might be true if the Republicans weren’t also barring the door.

Republicans aren’t interested in regulating immigration from the southern border, they want it eliminated. The wall is basically a giant Keep Out sign, guarded by a bunch of junkyard docs in ICE sweaters. Anyone taking action of any kind is branded with “wanting open borders,” a cardinal sin to the modern conservative. Actual policies don’t matter; either the border is sealed up, or the dam is broken allowing the unwashed, COVID-carrying rapists and welfare cheats to come storming in to rob your house and take your jobs. 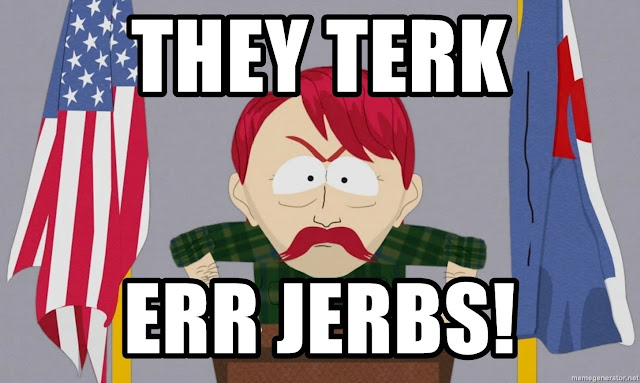 President Biden has a real chore on his hands down there. It’s a situation without any easy answers, so it will take time to come up with the hard ones. Promoting foreigner hysteria is not helping. (But they know that. “Help” is not the intended action.” 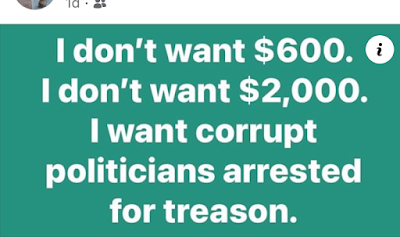 What they mean to say is “We want our political opponents arrested.” Because if they wanted actual treasonous politicians arrested, they had their chance in January. If they were really concerned about the sanctity of the Constitution and a democratic form of government, they would have insisted that the Former Guy be impeached.

And not just him… Cruz, Hawley, Greene, Boebert, and anyone else who abetted the riotous sedition by encouraging the rioters through repeating inflammatory lies or providing navigational guidance so the invaders could locate the people they wanted to drag outside and hang.

None of that happened, so spare me the faux outrage. You’re not concerned about treason, just putting some Libs in jail. Not exactly a high-minded, cerebral endeavor. Just sour grapes and blame deflection.

Not Buying the Bullshit

Speaking of utter bullshit, I just heard that Kellyanne Conway is flogging a tell-all book she’s going to write about her time in the White House. The blurb I saw said it would “Blow open the White House doors.”

Seriously? Was there anything else going on in the Trump White House that we haven’t already heard about from Michael Wolff, Bob Woodward, Omarosa, or any of the other “cash-in” books written by former staff? We got it, the President was ego-centric, lazy, crooked, and dim. Everyone catered to his whims. They hyped the good news and buried the bad. None of that is news anymore.

Not to mention, when an author makes a career out of telling (or supporting) major, obvious lies, why wouldn’t anyone expect her book to be more of the same? This one ought to go right to the bargain basement bins.

Shots in the Dark

The Bluz household has received 3 out of its 4 shots. Sweetpea got her second last Thursday and I got my first the next day.

Sweetpea’s experience was agonizing… took her until her 7th appointment to finally get stuck. The first six were canceled, either a day in advance, that morning, or saw her getting turned away at the site. It was excruciating. As a teacher being forced back into the classroom, the least they could have done was make some kind of organized effort to make the vaccines available.

This was just another symptom of the lack of federal guidance from the onset. They knew there was going to be a vaccine; they had all year to design a website to handle the distribution. Even if it was broken up into 50 websites, it still would have made it a much simpler process to work with.

My experience went much more quickly. Sweetpea has a friend who tipped us off on the new process down at our local chain pharmacy, for dealing with leftover shots. If you got there first thing in the morning, you could put your name on a waiting list. Then after all the day’s appointments were done, they’d call people on the list.

So, I signed up Friday morning and they called me about 6:15 that evening. I had my ass down there three minutes later. Good thing, too, because they ended up calling more people than they had shots and had to send some people home. But I was already getting the paperwork done by then.

Anyway, it was no biggie. I got the Moderna shot, which was expertly given and totally painless. My arm was a little sore the next day, much like with any other shot. Felt like I took a bump to the area, that’s it.

So if you’re looking to get the shot, you might want to ask your local participating pharmacy how they’re distributing extra shots. They may have a similar system of which you can take advantage.

I’m supposed to make an appointment to go back in four weeks. That’s the rub, of course. When I went online this morning to try to sign up through traditional means, the pharmacy site said there were no vaccines available in my area. You couldn’t even specify a date. (I presume it was auto-calculated based on the date of the first shot.) That had to be bullshit because they could just extend the date forward until there were second shot slots open. I don’t think the site is really conceived well. I’m guessing it’s not designed for scheduling four weeks in advance because they might not know how many shots they’re getting. But by telling people to go register, they’re just creating a logjam for themselves.

That’s the problem when these outlets are basically inventing their procedures as they go. It takes a bit of time to work out the kinks while they learn from trial and error.

But regardless of the website problems, worst-case scenario, I just go down in four weeks, put my name on the list, and do it again. Then after a bit more time, we’ll be one set closer to something like normal.

Each party is guilty of the same things. Their particular actions depend on whether they are in or out of power.

I'll believe that once the Democrats launch an armed assault on the Capitol with intent to hang politicians and overthrow a valid election.

Both sides are the same in that they're both imperfect. But outside that, the GOP is the party of further racism, sexism, religious zealotry and enriching the 1% at the expense of the rest of us. Show me one Republican policy that can't be filed under one of those headings.

When we were kids, my brother used to call me Mini Taz.(lol) I sort of have a soft spot for Kellyanne because I feel like if you want to get comfy on the couch by curling your feet up, go for it. I never understood while people got really upset about that.(lol) I mean, aren't there more serious things to be worried about in life? It takes a lot of guts to go on LIVE TV in front of millions of people and say that Sean Spicer's untruths were "alternative facts". That happened in 2017, and I declare I've used that term with 2 friends on several occasions because they are known to be less than honest.(lol)And yes, I still laugh about it! On a more somber note, it had to be super embarrassing and hurtful to have a daughter raging about her on TikTok, and being anti-Trump so vocally. Just when we sort of dealt with it, and swept it under the carpet, we see Claudia auditioning for American Idol! Just in case you're wondering, she did make it to Hollywood, but further than that. And of course, Katy wanted to know the scoop. Yes, I'm all into the pop culture thing.(lol) Sure hope the next shot goes smoothly. What a nightmare for Sweetpea, but glad it all worked out. Hope you both have an amazing day! Hugs, RO

I never had a problem with KAC curling her feet up on the Oval Office couch. It was just another "tan suit" controversy as far as I was concerned. We have far more important things to worry about.