Did anyone catch all the new and exciting ideas that came out of CPAC last week?

Right, me neither. They were pretty much, “We was robbed," and "we’ll do whatever Trump wants us to do.”

If ever there were a time to announce a bold new effort or program, this would have been it. But they don’t have a damned thing they want to do except glorify Trump and cut taxes (for the rich). Sure there’s a lot more that the politicians want to do, but nothing you can really campaign on, other than in the broadest terms.

They can’t say they want to cripple the postal service until there’s no recourse but to make it a private enterprise, but they can claim they’re reducing unnecessary spending and cutting waste. They can’t say they’re killing the EPA, the CDC, and the Consumer Financial Protection Bureau, but they can claim they’re cutting red tape. Every action sounds good on the surface but is designed to benefit the richest of the rich, aka big Republican donors.

The only substantive action we see coming from Republicans are taking place in the states, with laws proposed to limit abortion even more and tighten voter suppression laws. The latter has been a big one. Over 160 pieces of legislation have been drawn up, with the sole purpose of making sure we don’t see another turnout like we did last year. And the most Republican part of it all, they’re using the Big Lie, the accusation that there was rampant voter fraud in 2020 which “stole” the election from their hero, to rationalize their efforts. There is still as little evidence to support that as there was when they got laughed out of court, but that doesn’t seem to have much effect. That’s just what the “liberal media” says, right?

So they’re going to eliminate the ways millions of people voted because of voter fraud that didn’t happen. Today’s GOP, ladies and gentlemen!

I’ve enjoyed watching the new strategy roll out to keep Fox “News” and its imitators from making shit up about companies whose actions they think are detrimental to GOP rule. Voting machine makers Dominion and Smartmatic are suing these conservative propaganda outlets over the lies and accusations that their machines were rigged to hurt Trump’s votes and pad Biden’s. The old “The game was fixed” gambit.

These companies are taking that shit seriously, as evidenced by their multi-million or billion dollar lawsuits. Fox knows that they’ve been making that shit up so it’s been funny to see their talking heads trying to walk it back over the last couple of weeks.

I hope these guys sue the pants off of them. Maybe that will be an ongoing way to cut the lies they routinely toss out when it suits their purposes. Libel is libel, whether they claim they’re not a news channel but an entertainment channel, or not. I hope every private person with the means, or public company, starts suing these guys when they pull something out of their ass that’s damaging to their professional reputations. At least it should cut down on the most egregious stuff.

Who Thought Pissing Off the Dog Lovers Was a Great Idea?

Looks like we have a new “Tan Suit” controversy going. Some dipshit on OAN named Greg Kelly commented last week that one of Biden’s dogs, a 12-year old German Shepard, looked scruffy and unkempt and complained that it wasn’t presidential enough.

I think President Biden should get rolling with the trolling and go to the nearest DC shelter, pick out the ugliest, mangiest, goofiest looking dog they have, take it home and name it Tucker.

I know, that’s not the one who picked on the dog but naming a dog Greg Kelly is far too boring. It lacks character.

You Can’t Complain if You Don’t Show Up

I’m seeing lots of Facebook memes complaining about how there are secret Democratic issues getting funded in the COVID relief bill (which has passed the House and awaiting action in the Senate.) You know, I’m sure there are. And do you know why?

Because once again, the Republicans decided, en masse, not to support the bill, regardless of its overwhelming popularity with the general public.

If, on the other hand, they had decided to work with the Democrats on it, they may have been able to horse-trade out some of the things they didn’t like, and maybe get a few things in that they wanted. But if it’s preordained that no Representative or Senator is willing to vote to approve, what reason do the Democrats have not to put in whatever they want? Screw’em.

If the Republicans want a say in the bill, they have to show up and bargain in good faith. 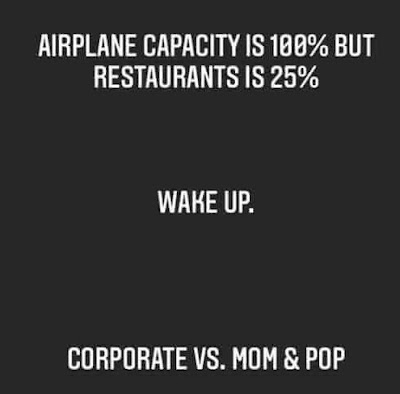 Memes like don’t even pretend that it makes actual sense. It’s more important to create the illusion that there is a giant conspiracy afoot that uses COVID to somehow control us for nefarious purposes.

There are ragingly simple explanations for the scenario above.

2.      People on airplanes are required to wear masks, which greatly reduces the spread of the virus. In restaurants, it’s basically impossible to eat and keep a mask on. The only alternative is spacing, hence the 25% capacity.

3.      The Airline industry and restaurant industry don’t really compete. How does it benefit Southwest Airlines (or any other large company) to keep restaurant capacity low? Both political parties would love to see small businesses succeed, so there’s no upside to them for enforcing capacity limits, other than reducing the spread of the virus. The whole premise doesn’t make any sense.

OMG - I'm laughing out loud at the Tucker dog possibility.(lol) Your sense of humor is always so fun. I'm scratching my head over the attacking of pets too, and don't get it. What in the world does a presidential pet look like?(lol) Hope you guys are doing well. I'm headed off to check eat my latest cheeseburger concoction and some lemonade mixed with cherry juice. Eventually I'll get back to blogging(lol) Hugs to you nd Sweetpea. RO

We're doing well. Sweetpea finally got her first shot so there is now calm and serenity in the house once again.