After a lull during the holiday season, I’m finding my conservative friends are dipping their toes back into the meme world. It’s a good thing because I was getting bored without a regular supply of dumb shit to debunk. 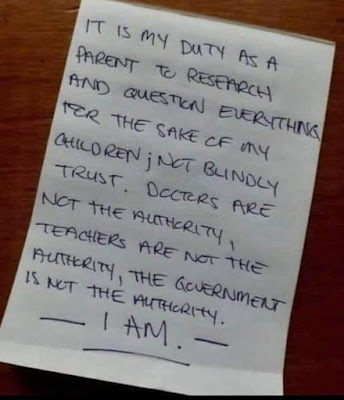 I’m sorry, this meme seems a little desperate, a little insecure, a little… 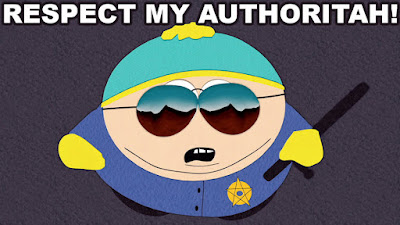 I think the problem I have with this meme is that there are two versions of the word “authority” in play here.

A parent having authority over their kid? I’m all for that. And no one else is really trying to deprive that. BUT, “being” an authority? Sorry, no. There’s nothing about being a parent that imparts specialized knowledge or wisdom upon you. Kids get sent to school to learn specific things which have been exhaustively vetted. Students have no need to participate in a daily demonstration of the Dunning-Kruger Effect. 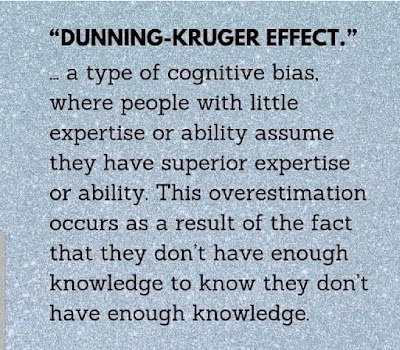 If you want the authority to teach your kids whatever cockamamie ideas you’ve ingested, home school them. You don’t get to insist that others teach the version of reality to which you ascribe.

If you want to use home remedies that no medical experts have approved, well, no one’s stopping you. Peace be with your children’s souls and enjoy the three hots and a cot when you’re in jail after their death. Or in a less serious version of this story, I hope you can afford to pay for their ongoing trauma therapy. 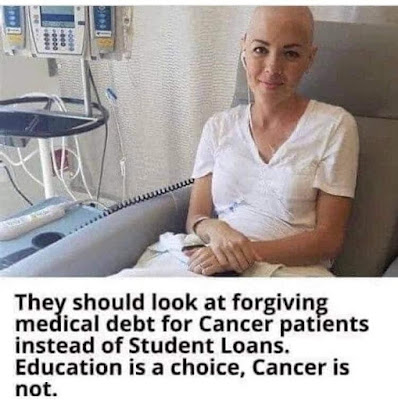 Oh, so now you want socialized medicine? (No, I know you don’t really care about eliminating medical debt, you just don’t want anyone getting off the hook for their student loans.)

This is just one more piece of the Republican war on education. As I’ve said many times over, the last thing the Republican establishment wants is an educated populace. They want people pliable, obedient, and willing to eat up whatever version of reality they’re pitching that week.

The last thing they want is a voter base with critical thinking skills that might get in the way of whatever boondoggle they’re trying to sell. They want their emotional appeals to do their jobs without getting messy things like logic or context involved. Hence the endless pleas for more kids to go to trade schools and pushback on anything resembling student loan relief.

Don’t get me wrong, eliminating the medical debt for cancer patients is a wonderful idea. But why stop there? There are a plethora of diseases and maladies that create crushing medical bills. The issue isn’t just cancer, it’s everything. We’re the only developed country with a for-profit medical system and it shows it by also being the most expensive. And the Powers That Be (AMA, Big Pharma, insurance companies) will fight tooth and nail against any of that changing because that would derail their gravy train.

In the last few weeks, I’ve had an up-close view of how things are going in hospitals and it did NOT give me a warm and fuzzy feeling.

My mom took a fall Christmas night that entailed an ambulance ride to the hospital and a 2-week stay. She suffered a deep cut on the head, three cracked ribs, and a kidney laceration. Sweetpea and I followed the ambulance there but when we arrived (about 3 AM), only one of us could go into the lobby. So she had to wait outside on a bench while I tried to find out where they took her. And of course, they couldn’t tell me because she was still being processed through the ER, and didn’t know where she was going to end up. All I could do was call back in the morning and see where she was.

This meant leaving my mom alone there, with no idea where she was or where her kids were. It was not a comforting situation.

I got there the next day, as soon as visiting hours arrived, to find her in an ER observation area awaiting transport to a room. At least I could go with her for that. And thus began a 2-week span of daily hospital visits in which my sister, brother, and I took turns staying with her from noon till 8:00 PM and advocating for her. And believe me, there was a lot of advocating necessary.

I will say without reservation that the nurses were wonderful, pretty much each one I worked with. They all did the best they could do given the stressful circumstances. It was obvious that the place was understaffed. There just weren’t enough bodies on hand to give timely care.

There were two things that needed tending to. The first was pain medication. I’ve heard that busted ribs are excruciating to bear… it hurts to even breathe. And consider that my mom is about 5-foot-nothing and 100 pounds. There’s not a lot of meat on her bones to insulate her from pain-causing jostling. So there were times that regardless of the medicine “schedule,” Mom needed some additional help to relieve the pain.

Sure, they give you the Call Button, and the desk usually answers right away, but that’s where the breakdown comes… getting word to the people who are supposed to come help.

This was especially an issue with the second recurring need, which was getting help to the bathroom. Now, to some degree, I or one of my siblings could help her move around. The problem was that she was tethered to the bed by various wires and IVs. It was a full-on excavation just to get her out of bed.

So, when it was time to “go,” she’d buzz for help, get assured it was coming, and then have to wait for 30-90 goddamned minutes! And when the nurse or tech would arrive, it was always the same story: “Oh, nobody told me.”

We talked to the head nurse and anyone else we could get to listen but that never changed. They’d always say, “Just call for help,” and it would never arrive in a reasonable time. And note, they had her on softeners and prune juice to get things moving (because the pain killers can be binding. So these two things were working at cross purposes.

Eventually, we just started moving her ourselves, if not to the full bathroom then to the portable pot that we could put by the bed. They didn’t like that at all, but at that point, I didn’t care.

“If you don’t want to clean up the mess, then get your asses in here when she has to go!”

The plan was to move her to a rehab floor for physical therapy, as soon as her vitals stabilized. By the second Friday, she was ready to go. The prior day they contacted her insurance company for approval of PT but no one had heard anything back. That afternoon, a doctor told me, “If we don’t hear from them by 2:00, then we probably won’t until Monday.” That meant they wanted her to stay in the hospital for two more days, not for a medical reason, but because they couldn’t get an answer from Insurance.

I let them know that this wouldn’t be happening. There’s no way we were letting her stay for another weekend in the hospital, suffering personal indignities that go with it, and risking COVID infection with every breath. They could set up PT sessions for home, which was fine with them. We got Mom home that Friday (a week ago).

And one last insult… they lost her driver’s license. Upon request, I handed it to the EMT from the rig that picked her up and no one has seen it since. The hospital says they don’t have it and never got it. The EMT house says they gave it to them in the ER and hospitals lose these things all the time. Just one more clusterfuck, where everyone points the finger at someone else. Good thing Mom’s driving days are over.

I haven’t seen a bill yet but I know it’s going to be a doozy. And to think, they wanted us (or the insurance company) to pay for two more days in a private hospital room, just to wait for a phone call. I bet if she wasn’t insured, they’d have hustled her out post-haste. All I could think was that this is another reason why medical bills are so high. It’s bad enough being forced to pay them to provide pills you have already, or for food that never gets eaten (or often, was never even asked for).

So Mom is recovering at home and making great strides. She had her first PT session this afternoon and a regimen of exercises that should help her regain her strength. She’s fortunate that she had family members that were here for her. There are so many that don’t. I feel bad for those who have to go through a hospital stay alone. It’s already trying just being under hospital care, let alone trying to understand what’s happening and what’s to be expected.

And I feel even worse for the poor souls who languish in hospital corridors or ER areas because unvaccinated COVID patients are occupying all the rooms. To that end, Maryland is in a lot better shape than other parts of the country because over 90% of our state has had at least one vaccination. The hospitals are hoppin’, but they’re not overwhelmed like they were in early 2020, when they were using hotels as hospital overflow.

I’m thankful for the wonderful nurses who did their level best to care for my mom. But they really need to look at their processes and procedures because that shit is just not working.

You Nailed it my Friend, I have nothing to add... I Agree with every Word. Preach Brother, Preach!

Let me take this moment to add that when we finally got an answer from the insurance company about covering the in-hospital PT, they turned it down, nailing down even further that we got it right in pulling her out of the hospital when we did.