I come from a family of picture-takers. When I was a kid, whenever we visited our relatives, finding and paging through their phono albums was a common activity.

When I was staying with my Mom back in September, after my father passed, I had the chance to go through some old, familiar albums that I hadn’t seen in years. For some of the albums, I just took cell phone shots of the pictures, just because there were so many I wanted and no time to set up for a long scanning session. These albums covered specific periods, from places we lived to ones dedicated to weddings.

Then I got to borrow a couple albums from my sister, which covered our family’s earliest days. One covered the time from my parents' wedding in 1960, through 1964, by which time my brother and I had been born. The other covered 1965-1968, capturing my sister’s birth and the fallout of two boys having a little girl in the house. Those, I had the time to remove from their photo album pockets and scan properly.

Between those earliest albums to the ones Mom had, it was interesting just seeing the development of photographic technology. Some of those earliest shots of my parents’ honeymoon were on old black and white paper, with the edges all wiggly, rather than straight-edged. 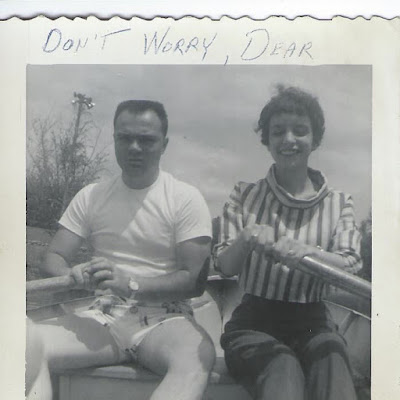 Mom and Dad on their honeymoon, looking all cute, like the Champion Poconos Rowing Team.

Others had holes punched across the top like it was torn off a stack of other pictures. 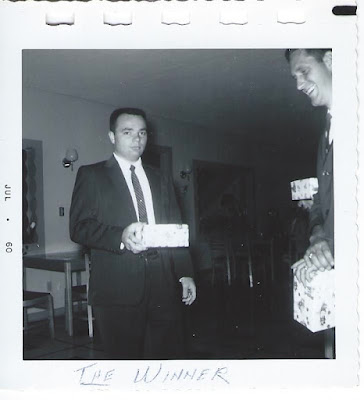 Dad, still on honeymoon, after winning the award for the best-looking guy wearing his new wife’s clothes. (No I’m not posting the pictures of THAT.)

A lot of the color had faded from the 60s shots, and the 70s pix had that bright “70s” look. And I especially appreciated the ones with the white border and the dates stamped on them. That removed the inaccuracy of a fading memory from the equation, (allowing, of course, for the time gap between the activity photographed and when the film was actually taken in for development.) Plus, it was the perfect place for a caption.

And of course, it was fun watching my siblings and me growing up page by page. But I was usually more interested in the background objects…

“Remember that swing-set? Look at that old TV! Oh God, the cuckoo clock!”

And then there were the anachronisms that stood out so starkly from how we live today, starting with the ever-present cigarettes in people's hands. I can still remember my Grandpa’s retirement parties, (there were several because he kept going back to work, probably just to have more parties), that took place in their basement. There was singing, playing instruments, and general high times, conducted by grownups in dress shirts and ties, or party dresses. 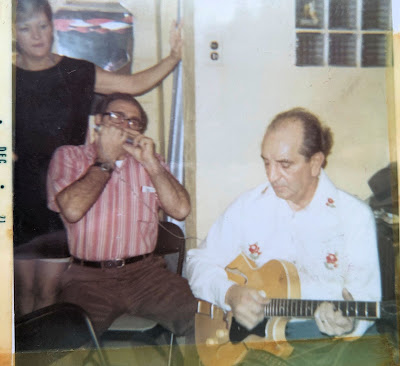 That’s my grandpa on guitar. 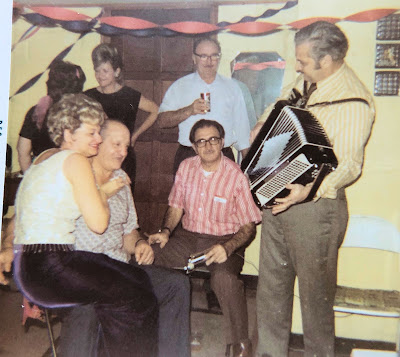 The rest of the band. Grandpa and the harmonica guy used to like to secretly turn down the other one’s amp.

I wanted desperately to go down there and enjoy the revelry, but the smoke was so thick, it burned my little eyes. Oh, the misery that was me! Now that I think of it, it was probably a conscious decision to create an effective kid repellent, so the adults could get their party on in peace.

Another thing I noticed is how parents used to really dress their kids up for a day with the extended family. Hats were a big thing and I don't mean ball caps… I was 4 years old and walked around wearing a sport coat and fedora like I was a miniature Frank Sinatra. 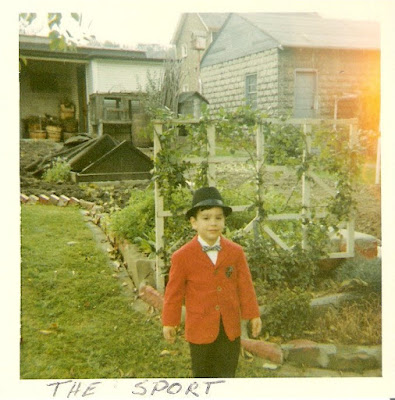 I look like I just got done coaching the 1965 Chicago Blackhawks.

The other thing that stood out was the apparent lack of basic safety protocols that would result in calls to Child Protection Services if done today. For example, consider this happy picture of my brother (R) and me (L): 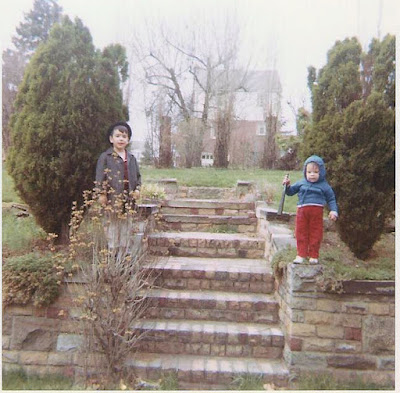 What was the thought process behind this carefully arranged shot? I figure it must have been something like, “Hey, let’s put the boys up on the edge of this 4-foot stone wall, right on the ends of the railings. No way they’ll fall off and break their necks. And let the little one keep holding that stick, which surely won’t get jammed through his eye when he falls. And the big one? He’s got a hat on, which is almost as good as a helmet. Besides, that bush will break his fall. Can’t coddle these kids now, can we? OK, everybody smile!”

Same deal with this picture of me and my cousins a few years earlier, up on the same 4-foot wall. 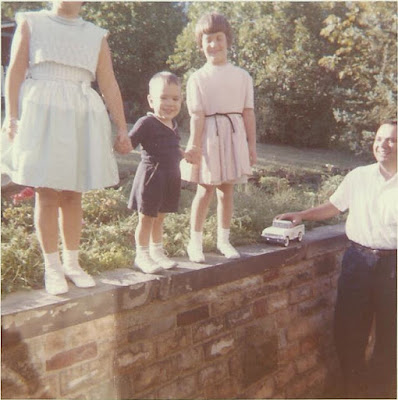 Maybe they were counting on us cushioning each other’s falls. Or maybe my dad, (far right) thought he could dive in and catch us, like Roberto Clemente going after a short pop fly. I think maybe he wanted to bump me off so he could have my little truck all to himself. And speaking of Dad...

When we held the remembrance event for Dad, my Uncle Joe, who lives in California, sent a few words for his son to read on his behalf, which included this brief story:

I’m a lifelong car guy. Jim was not. Jim’s first car was a 1960 Plymouth Valiant. 4-door sedan. The coolest thing about it was that it was a stick, but instead of 3-on-the-tree, it was a floor shift, which I thought was supremely cool.

Now my first car was a 1961 Volkswagen Beetle. The coolest thing about my car, besides that it was a convertible, was that it was not only stick, it was a 4-speed! When I bragged about that to Jim, he was not only unimpressed he said, “Why would anyone want to shift an extra gear?? It makes no sense!”

Email ThisBlogThis!Share to TwitterShare to FacebookShare to Pinterest
Labels: Bluz LIfe, Picture This, Stories and Misadventures, The Family Business

I'd know your ethnicity after these photos!!
But you know what is sad about this? None will be able to do this anymore because they are only on their phones. I've begun the process of printing. $$$ when you do it all at once 1,000 of photos. I just want them in my hand.
Oh and my uncle would let me sit on his lap while he drive and he let me steer while he drank beer. Can you even imagine that? He'd be arrested for the kid driving, drinking and driving, no seat belts and more. But it makes me smile I wouldn't give up the way I grew up for today's way.

Gee, what gave it away, the massive garden? The honeymoon in the Poconos? The accordion? Our swarthy good looks? lol...

My Uncle Gordon used to let me shift the gear stick for him in his Corvair. I loved that! And I totally had the experience of riding around untethered in the back of a pick up truck on more than one occasion.

I wouldn't trade in my upbringing either. We had a lot of fun as kids and a lot of autonomy compared to kids today (who basically have none).

Oh what a wealth of Priceless Treasures that Imagery all is. I'm the only Pathological Picture Taker whose been the Keeper Of The Past too. My Brother is a retired Professional Hollywood Photographer yet he doesn't keep pixs, he just takes the most amazing ones ever... so he's pathological about it, but not a Keeper of them... I inherited most pixs to the point even distant Friends of my Parents sent me their Old pixs when they were close to end of Life, knowing I'd cherish them more than their own Families. I even go so far as having "Adopted Relatives" Old Photos of complete Strangers but with the best Visuals... long discarded from whoever used to know who they were and the back story behind the Photographs. I like to Imagine what those Stories are. I so enjoyed you Sharing yours becoz I could look thru Old Photo Albums of anyone all day long and enjoy the Stories of the Past.

Like you I like them in my hand and make copies, glad to hear someone else does this too... so sad that digitals on a device suffice for most people now... and the pixs are so good now too... they should be immortalized in print I think.

I made the jump to all digital but I still miss the having of pix in hand. Storage is a lot simpler with digital though. No more overflowing picture drawers.

So far, I've managed to keep the Photo Archive limited to my own extended family.

I'm a good decade older so my transition into color was later, but those were certainly different times, eh? Somehow we survived (so far) all the things that seemed so normal at the time. I am getting a little more risk-averse in my old age, however. Glad you have that pictoral record of your family history.

I just worry about who's going to keep the records after I'm gone. I don't have kids so I hope one of my nephews is willing to take up the task.