Terror on the Home Front

While I was hunting up the previous post from my earlier archives, I came across this one as well.  It made me laugh, even though I knew what was coming, so I figured I’d give this one some new light as well.  This was also written in 2006.
*****
Every day we read about the horrors that are being inflicted on the world.  Militaries dropping bombs, insurgents blowing up crowded markets, people getting pulled off busses and killed, the litany goes on.  We may breathe easier because this is going on in lands far away from us, but that is not to say that we here in North America are immune from experiencing terror in our daily lives.  I know that just this week, I myself have felt the icicle of terror pierce this heart of freedom beating deep within my libertine chest.  Until now, the only torture it had known was that of metaphors.
Who knew that daily life could be so fraught with peril?  Take this morning, for example, when I had to deal with a shoe emergency.  This emotional minefield started yesterday, but let me give you some quick background.
First of all, I’m a guy.  That means that shoe options are kept to a minimum.  I have three: Black, Brown, and Sneaker.  (I consider sandals to be part of the “slipper” family.)  My routine is that I keep Black and Brown at work and commute in Sneaker.  This saves a lot of wear and tear on the dress shoes, especially in avoiding the tromping around between the office and the subway on rainy or sloppy days.  It also makes it easier on me in case I have to run for the subway, or sneak past the panhandlers when they’re not looking.
Anyway, I wore khaki’s yesterday, which meant I had to wear Brown for the day.  It is a big adjustment for me, to even care about this sort of thing.  I never used to… it was simple black shoes, black belt with everything…  (This may also explain why I’m still single, but that’s another story.)  It’s not that I really “care” care, it’s just that I got tired of everyone thinking I was too dumb to know any better.  So as I proceed through my forties, I at least want to look like I’m trying to be a grownup and one of the concessions I’ve made attempting to wear clothes that match.
(Side note:  Do you remember Garanimals?  They were a line of kids clothes back in the 70s, each with a different animal on it.  The idea was that if you wore all the same animal, the clothes were designed to match.  I think they should make a line of those for grownups.  Well, for guys anyway.  Single guys… Dressing would be so much easier.)
So there I was, in my khaki pants, and brown shoes and belt, secure in the knowledge that I dressed myself correctly today.  Come quitting time, I forgot to change out into my sneakers.  Not an immediate problem; for a change I get to match while in transit, and draw looks of approval from my fellow subway commuters.  Then I realized the bad part… I was scheduled to wear black pants to work the next day.  Now I know, it seems weird that I “schedule” what pants I wear, but it’s not as bad as it seems.  I was actually scheduled to wear a gray shirt and therefore had to go with the black pants by default.
My options were limited… I could wear other sneakers back to work, and carry the Browns in my bag, but that would leave me with two pairs of sneakers at work and my size 12 shoes don’t fit in my shoulder bag very well.  I could wear khaki’s again, but like I said, that would have broken protocol.  My only choice was to wear the Browns back to work in my black pants, and hope no one would notice.

Things were so much easier when I didn’t give a shit.  There I was this morning, up on the train platform, in my mismatched clothing, trying to make my feet as inconspicuous as possible. But all I felt were the cold appraising stares of disapproval from my fellow commuters.  I tried setting my shoulder bag down over my feet, but that only made things worse, given that my bag was black as well.  I half expected to see Carson Kressley, the blonde, queeny fashion expert of the Queer Eye guys, pop out from around the corner and give me a stern talking to.  It’s truly fortunate that nothing like that actually happened, because he might have been “accidentally” nudged down onto the tracks in front of the approaching train.  But I digress…
On the train, I was fortunate to have the cover of a big woman wearing a bright pants suit sitting on the aisle seat beside me.  When the doors opened, I hustled my way up to my building and snagged an empty elevator car, which delivered me to the privacy of my humble cubicle and my much needed black shoes.  Complete at last!  My morning of terror could now fade into the abyss of distant memory.  OK, it would have, if I didn’t feel compelled dredge it back up in order to tell the tale.  Such is the price of one’s “art,” I suppose.  Another suffering artist on life’s scrapheap…
But the indignities continued…
I found myself unable to concentrate, late yesterday, because nature was calling me in an urgent manner.  And not in a “yeah, excuse me, when you get a minute, you’re going to have to take care of something.”  More like “YOU.  GO.  NOWWWWW!!”
Normally, I prefer not to frequent public restrooms for the purpose of using the stalls.  (I’m trying to put this story as delicately as I can, just so you know.)  But sometimes, your hand is forced, and you gotta do what you gotta do.  So when I gotta do, I try to do when no one is around.  Not only do I not want anyone listening to what I do, I do NOT want to hear what anyone else is doing.
When I peeked in the restroom, the coast was clear, so I scuttled to the last stall down and began preparations.  But before I could begin conducting any business, someone else came in and entered the stall two down from me and began his preparations.  This meant that I could either up and dash, or batten down and wait it out.  Recalling the urgency of my mission, I decided to batten down, so I put my hands up by my ears, and prepared for the onslaught, ready to try to block it out.  Twenty seconds went by… thirty… forty five… nothing.  Uh-oh…
It occurred to me that the interloper might be waiting for me to leave, thus initiating a Stall Stalemate.  Five minutes went by… then ten… and no business. 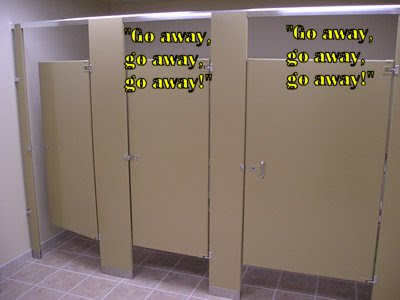 It was obvious that each of us was waiting for the other to make the first move.
During this time, a number of others had come and gone on the urinal side, sometimes several at once.  At one point I lost track of who was in and who was out, and wondered if my nemesis was still nesting, so I peeked for a foot check.  There were two black dress shoes still there.  (They matched his pants too.)  I began to worry that this one may take a while to crack.
Thankfully, he finally cried “Uncle” at the fifteen-minute mark, leaving me to conduct my business in peace.  As I washed up and left, I was concerned he might be staking out the entrance, to see whom his tormentor was.  I was curious about who he was myself, but then I could always take a stroll around and see who had the look of discontent on his face.  But there was no one around, so I was able to make a getaway, like a stealthy, business-conducting ghost.
So next time you read the paper or watch the news about the suffering and atrocities that are going on around the globe, remember that there are plenty of terrors right here on the home front.  Tune in again later for the next installment, “Paper Cuts: Blood on the File Cabinet.”
Posted by bluzdude at 7:35 PM

Email ThisBlogThis!Share to TwitterShare to FacebookShare to Pinterest
Labels: Bathroom Bluz, Office Bluz, Things That Piss Me Off