Time to empty out the little bits of entertainment that have been piling up in my head… a mental high colonic, if you will.

Fun at Work
You know, sometimes I wish I had me to work with.
Here’s an email exchange I had with my friend and fellow blogger “Goldey.”  We were talking about some rather mundane details regarding sending someone from her department out to another facility to do some testing.
Bluz: Given that you answered and either/or question with “yes,” we’re presuming you mean “Yes, the issue was resolved,” as opposed to “Yes, there is still an issue?”
Goldey: Yes it was resolved.  How sad is it that I had to go to my boss and tell him he had to tell M to go out there though?  I mean seriously…
Bluz: Srsly!  I mean, GD, WTF?
Goldey: *snort*
Bluz: I don’t know what came over me right there.  Irritable Vowel Syndrome?
Sometimes I tickle the hell out of myself.


Like on Friday, we had a department lunch all together in a conference room.  While we were setting up in there, I noticed this odd table configuration.  What is the purpose of this: 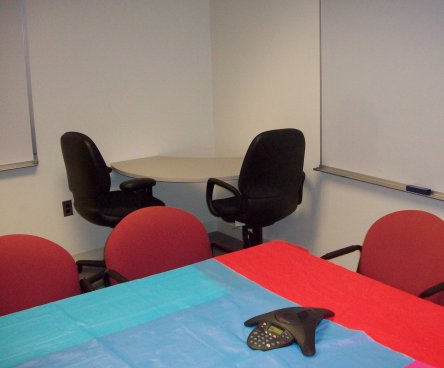 Is this where you get sent to Time-Out if you’re bad during a meeting?
“I’m sorry, bluz, but that was a ridiculous idea.  Go sit in the corner until you stop wasting our time with ridiculous emails and smarten up.”
Brand Awareness
I love it when the recurring themes of this site starts to filter out into my readers’ lives.
Last week I got the following email from FDF (Friend of D-Fish) DG:
“So I’m at breakfast this morning with a friend, and the waitress starts pushing THIS.  I immediately thought of you.  You need to get yourself to Denny’s, my friend.” 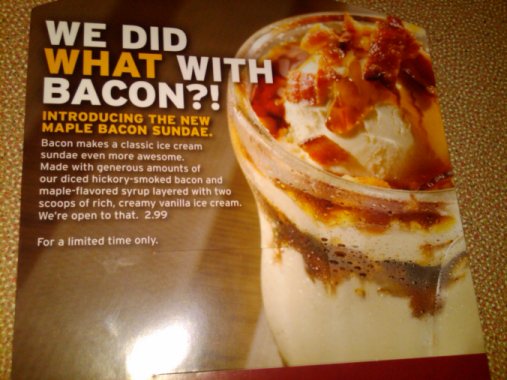 What a great idea… the Maple Bacon Sundae.  I’m all over that.  If only I knew where there was a Denny’s around here.
I’ll always have a soft spot for Denny’s for no other reason than they had one right next to the Cleveland Marriott.  We’d spent many a Saturday night partying hard before a Steelers/Browns game, before crawling over to Denny’s about 2:00 AM for a Grand Slam breakfast.
I think The Onion got it right with Denny’s when they ran this: 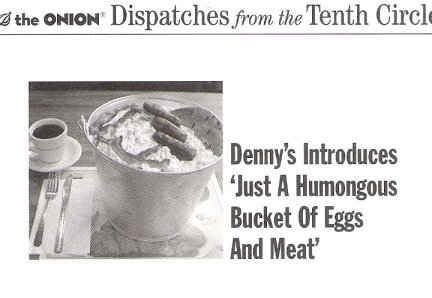 I actually think this is a pretty good idea.
I used to like it when Denny’s had that special where you got a meal on your birthday for free.  I actually used to do that, when I was all alone and living in Cleveland.  People would ask me, “So what are you doing for your birthday??”
I’d say, in my best Droopy Dog voice, “I’m going to Denny’s for my free birthday dinner.”
I think they invented that “L-on-the-forehead” symbol just for me.
Time Duck-Walks On
I saw in the paper on Thursday that it was AC/DC guitarist Angus Young’s 56th birthday.
Angus, the eternal schoolboy is 56.  Son of a bitch.
I know he was still rocking the schoolboy suit on their latest tour but I have to say this.  He’s looking less like Angus Young and more like Ernst and Young.
(Pausing while the accountants wipe off their monitors) 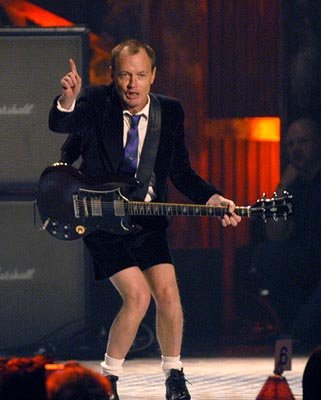 OK, he might be getting a little worn-looking, but I tell you what.  Nobody works any harder or rocks any harder than Angus Young.  The dude is a freak of nature and he’s been delivering thunderbolts of crunch for almost 40 years.
I’ve seen AC/DC 5 times and every time wasbetter than the last.  (I definitely have an AC/DC post in me in the near future, but this one isn’t it.)
Regardless of how old my boy Angus is getting, he’ll always look like this, to me: 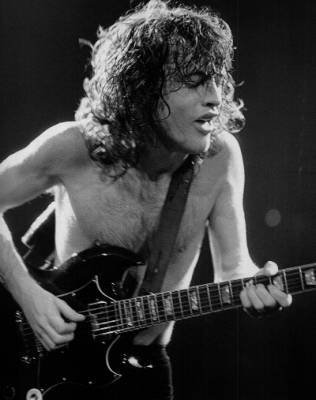 Last Time I Saw a Mouth Like That, it Had a Hook in it
I saw this clip on Facebook and thought it would make a good closing feature.  It’s simply 100 of the greatest movie insults of all time.
Do beware, it is totally unsafe for work or in proximity of little ones.  (Unless you’d like them to become schoolyard and principal’s office legends.)  While I know that if you come here often, you must have a high tolerance for strong language, there’s some terminology used here that even I won’t broach.
A lot of my favorites are in there… They could have used the entire French Taunter scene from Holy Grail, but I’m sure there were time considerations.  Same with most of Rodney’s dialog from Caddyshack. (See the title of this section.)  But I was happy to see a lot of old favorites in there.  Not sure what’s missing.
If you can think of any, feel free to drop them in “Comments.”  I promise not to take them personally.
Posted by bluzdude at 1:48 PM

"...AAh faaht in your general DIE-rection. "AAh wave mah private paahrts at your Aunties." "And your faahther smells lahk elderberries".
So there you have a tad of the French Taunter to elevate and refine the previous insults.

Imagine Angus Young as a BABY. How did he survive? Could even a mother love that?

You never had Time Out as a kid. Just the ol wooden spoon. Those aren't allowed at meetings.

Angus does totally and forever will rock!

That 100 Greatest Movie Insults of All Time is awesome. I discovered it a while back and I've watched it like a dozen times since then. Part 2 is pretty hilarious too. So is the vid 100 Funniest Falls. I love watching little kids and animals biff it. :D

I also saw that bacon covered desert. I have a Denny's close to here and I plan on indulging in one soon.

Mary Ann,
"...you tiny brained wiper of other people's bottoms..."

That whole sequence is gold.

When I was young, a time out is what you got in between ass beatings, so the parents could catch a breather.

Raven,
Little kids getting smacked in the head with footballs and stuff never gets old.

Trash,
Then I'm counting on you to do some recon, then, buddy.

Humongous bucket of meat and eggs.... sounds good actually, I could go for that right about now!

Yup, that bacon sundae almost made me vomit.

It's sympathy vomit for Mrs. BG.

Brahm,
It's an idea whose time has come!

Cassie,
Mrs. BG would totally like the maple bacon sundae, if she wasn't preggers.

That sundae almost made me vomit too. And I love almost all forms of ice cream.

Also, when I first read this: "He’s been delivering thunderbolts of crunch," I read "crunch" as "crotch." I still think that would be appropriate, however.

Angus is looking a lot like Niles from the old "Frasier" show. Love the table in the corner. Thought exactly the same thing before I knew what you wrote. Isn't that weird? It's like we did the Vulcan mind-meld or something.

Jessica,
You're also disqualified on account of the Preggers issue. You can't be trusted to know what's good right now.

(Of course, it could actually be horrible, but anything with bacon gets the benefit of the doubt from me.)

Thunderbolts of Crotch would be a good name for an AC/DC tribute band.

Jayne,
No question we think alike. We just do it on different coasts, 3 hours apart.

Those shorts are, well, yeah.....I suppose it takes all kinds.

Even the waitress believed the bacon sundae was a rediculous idea. I can't even imagine.

I have added the insult clip as the signature on all of my work related e mails. i will let you know my employment status tomorrow. Lisa Dunn

DG
The shorts are tradition. It started when Angus was an actual school boy and one day went directly from school to the gig and the outfit killed.

An AC/DC show without Angus in the schoolboy suit is not an AC/DC show.

I can’t believe it’s taken this long for someone to wed bacon and ice cream. And the maple syrup is just like another topping… the perfect complement. I have to try this.

Lisa!
So nice to have you visit! Thanks for commenting!

There is nothing quite as exquisite as a well delivered insult, is there? Unfortunately, when I need to deliver one, I am rarely in a compatible mental state in which I’m able to collect such devastating thoughts all together into one well-timed verbal assault.

I pretty much leave it at “Go fuck yourself,” or maybe “blow me,” for a change of pace.

I got to work security for an AC/DC show once. One of the best nights I can remember. Angus rules.

Acadia,
Paid to see AC/DC??? You were living large, my friend.

I was actually less than 10' away from him for a split second, the last time I saw AC/DC. I was in the 2nd row on the side, and after his appearance in the back of the arena, when he rode back to the stage on the shoulders of his roadies, he passed right by me. I almost had a freakin' heart attack!

I thought this post was a winner when I saw the corner conference table for naughty colleagues, but more importantly, I NEED THAT SUNDAE. I can't believe you didn't post this last week when I was in Ohio and had a Denny's within three states.

Denny's was always a great middle of the night hangout. For one, it was open, unlike everything else around. And two, it's where all the high school smokers hung out and drank coffee. That seemed so edgy when I was a sophmore in high school.

And as to the aging of old rock stars, I felt the same way when I heard that William Shatner just turned 80. 80!! That's for Milton Berle and Betty White, not "The Shat."

Mundane
My apologies for not running the Maple Bacon Sundae sooner. And thank you for being a supporter of my Baco-Mania. All these preggos and vegetarians are blunting my meat appreciation.

I HAVE to find out why in the hell we have a Time Out Table in our conference room. Srsly!

Bagger
That’s totally why we loved Denny’s! It was open when we needed a beer sponge, and was within crawling distance of the Marriott. And there’s nothing like the smell of bacon, pancakes and syrup to make you feel alive again. Before you go pass out…

The Shat pulls it off because of the wig. He’s never accepted his geezenhood and consequently, neither have we.

And once again, The Onion NAILS it.