Back when I lived in Cleveland, I was in the most tumultuous relationship I’ve ever endured.  It lasted from we met in 1987 until we finally split up for good in 1988.  In between, we got together and broke up 4 different times.  (Just for giggles, I used the Synonyms function in Word on “tumultuous” and it yielded: turbulent, confused, chaotic, disorderly, riotous and noisy.  All were apt adjectives to describe our time together.)

It got to where I couldn’t even say her name any more.  I took to calling her “Whatsername,” which was a tactic I learned from my brother… a retaliatory denial of their personhood and identity.  In fact, I haven’t spoken her actual name since long before the last breakup.  Even when people have asked me what her name was, I’d usually tell them it was the same name as a particular television character and let them figure it out.  (And, no, don’t ask now.  I’m not telling.)

I was around 26 and managing a mall record store in the Cleveland suburbs.  My boss wanted to transfer me across town to a larger, free-standing store, so he sent me a new manager trainee.  We hit it off immediately.  We especially hit it off late one night after we were up until the wee hours doing a store inventory.  We were going to go out for drinks afterwards, but I forgot that every place would be closed.  So we went back to my apartment instead.  And so it began.

She was a divorced mother of a small boy and had been having a rough go of it.  She’d been through a shit-storm in her life up until then and I was determined to fix all that.  I was going to be her White Knight.

The complications started immediately.  I soon found out that she had been dating this other guy who she had known for 12 years.  I didn’t immediately realize how much trouble that would cause.  Plus, there was this other old boyfriend who had somehow gotten my phone number and had taken to calling at all hours and hanging up.  It got to the point where I’d just answer the phone, “Hi Dickhead.”  (This was a gamble, of course.  In 1987, no one had caller ID.  Luckily my Grandma didn’t call very often.)

Anyway, after a couple months of dating, she called me up to break up with me.  She was going back to the old boyfriend.  After all, she’d “just met me and she’d known him for 12 years!”

I was gob-smacked.  I mean, what kind of reason is that?  All she’d done for our 3 months together was complain about him!  I didn’t get it.  I’d been wonderful to her, trying to undo all the harm done to her in the past. Unfortunately, I was not exactly a model of grace and decorum in the aftermath and I reacted very poorly.  When she came by to pick up her shit, I included a piece of the I-Heart-You mug she’d given me, which I had smashed for the occasion.  (Like I could ever drink out of THAT again…)  I also included the booklet of “Love Coupons” that she’d given me for Valentine’s Day.

“You can use these on that other slob,” I told her.  As she walked out, I slammed the door, which echoed throughout the apartment building hallways to amplify her Walk of Shame.”

I don’t know what it’s like now in the retail world, but back then we had kind of a built in support system of store managers within our district.  Many of us had worked with each other before and had often started out in the same stores.  So it wasn’t long before my other manager friends learned what happened.  They lent their comforting ears as I vented about the unjustness of it all, until eventually, I started to get over her.  It was uncomfortable whenever we had to deal with each other on store business, but I was getting through it.

But before too long, she called me again.  The Slob wasn’t treating her well and she missed how I made her feel.  I was extremely hesitant, especially because she wanted to see us both.  That was a deal-breaker for me.  There are some things that I just will not share.

But she always seemed to catch me at my weakest times.  When you’re sitting at home drinking wine and watching TV alone, and your old girlfriend calls you up and says she wants to be with you, it’s pretty damned hard to say no.  You look around, knowing you have no other prospects and zero irons in the fire, and go “What the hell else do I have to do?  I can either sit around here and be lonely and miserable, or I can go over there and get nose-deep in some hot monkey love.”

So we got together again and dated exclusively again for another couple of months.  At least I thought it was exclusive.  I should have wised up the time that we were on our way to see Eric Clapton in concert and she told me she wanted to see The Slob, but still wanted to see me too.

I was like, “Fine… feel free to see him.  But I’m out.  I can’t share a woman I love.” I didn’t realize until much later that what she wanted was for me to fight for her.  To me, it was much simpler… “Either you want me, or you want him.  Not complicated.”

So it shouldn’t have been so surprising when she broke it off again, for the same reasons.  “I’m going back to him… after all, I’ve known him for 12 years!” 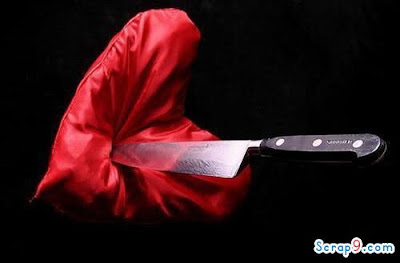 She also had a new angle this time; a 2-pronged attack.  On one hand, she felt I would not be able to support her on the money I made (which was the same money she was making, I might add).  On the other hand, she felt she was becoming too dependent on me.

I questioned the obvious self-contradiction contained in those statements, but to no avail.  She was going back to The Slob and their “12 years!”  And I went back to being steaming mad and acting all pissed off.  I ducked her calls at work.  If she needed a supply of a particular hot record, I told her I didn’t have any to spare.  (This was actually true, but I enjoyed shooting her down.)  I was generally rude and hostile and would often hang up on her without saying goodbye.

One time when our DM was at my store, I picked up the phone and it was her, looking for him.  I didn’t say anything to her, I just said to the DM, within easy range of the phone receiver, “Here, it’s Whatsername.”  He knew who I meant.

It wasn’t that I was trying to be a dick… (OK, maybe a little), but just hearing her voice would set my heart beating fast and I’d get that sick feeling in my stomach.  It’s so hard to be around someone that dumped you.

Note to anyone considering an office relationship: let this be a warning.  Don’t do it.  It’s not worth it.  This damn near killed me and we didn’t even work in the same place.

She came into my store one afternoon, seeking some product she needed.  I gave her the freeze, as usual, speaking only when necessary and then, in 1-word answers.  That’s when she said it: “You always make me feel so bad when I come in here!”

I was incredulous.  I make HER feel bad??   She tears my heart into fuckin’ pieces over and over again and I make HER feel bad?  I was so mad, I couldn’t even see straight.  That night, I went home and wrote her a letter.  (1988, people, there was no email and I never would have been able to say what I needed to say, out loud.)  I wrote her a 3-page letter on legal paper and carboned it into my journal.  It was my masterpiece… it was like a coiled snake that laid back and then struck, recoiled and struck again, over and over.  I got everything off my chest about what she’d done to me and how I felt about it.  It was really quite therapeutic.  If she didn’t realize what she’d done to me before, she sure would now.

Oh, did it ever work.  It caused precisely the kind of damage I’d hoped it would.  She thought it was going to be all warm and fuzzy and conciliatory, because that’s how it started, and then POW.  Bomb after bomb.  See, she told me all about it a couple of months later when we got back together again.

She wouldn't break my heart again, would she?  Or could it be that I was really a slow learner?

The saga will continue in the next post…
Posted by bluzdude at 7:58 PM