When we last left our long-suffering hero, he was at a lull in his kidney stone tribulations, but was now dealing with a return of atrial fibrillation.  Sucks to be him…

I've had A-fib on and off since 1996.  I wrote about my 2002 and 2007 surgeries for it before, and suffice to say, I wasn't terribly worried about the recurrence.  I suppose I was more annoyed than worried.  Because I've lived with it for such long periods of time, I don’t find it terribly threatening.  The only practical effect it ever had on me was leaving me winded from walking up hills or stairs.  So when I felt winded after merely getting dressed in the morning, it got my attention.

That’s when I called an audible and decided to just show up at the hospital to get looked at, rather than calling from work to set something up.  Johns Hopkins is located at the end of the subway line I take every day, so getting there is a breeze.  Because my cardiologist had previously told me that if I got there within 48 hours of the onset of the a-fib, they could do a “cardioversion” (where they shock the heart back into rhythm, like you used to see on “ER”) without all the blood work and invasive pre-op testing, I felt confident in what was going to happen.  I’d been through the cardioversion drill twice before so I figured they’d get me in, zap me, and I’d be back on the subway on my way to work, by 10:30, tops.

Initially, my biggest concern was where to go, because Hopkins is a huge facility.  Because I was showing up out of the blue, I didn't know if I should report to the A-Fib Unit or what.  After explaining my situation to the information desk person, she said I should go directly to the ER.  Getting there sounded complicated though, so I allowed them to call a wheelchair for me.  Sure, I could have walked, but I could just see making a wrong turn and getting hopelessly lost before collapsing in a heap outside the Podiatry Unit.  So I let them wheel me around.

They took me in, did a quick EKG, then found a bed for me immediately.  They must not have liked what they saw.  So again, there we were, Pinky and I, chilling in another curtained ER room.  This time, I was gowned in my dress slacks instead of sweat pants.  But on the bright side, I got another pair of hospital slipper socks! 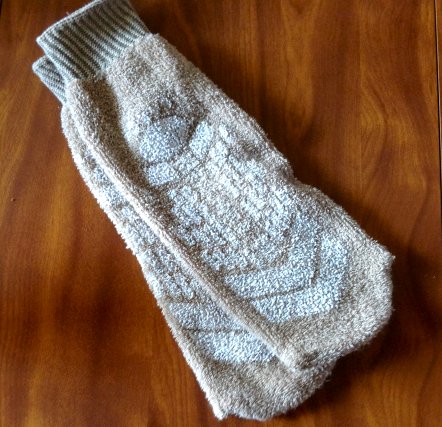 After that, we began the endless parade of nurses, techs, med students and doctors who proceeded to poke, prod and ask me the same questions.  I made sure everyone knew about my previous week’s kidney stone adventures.  Pinky was eager to assign the reason for my A-fib relapse on taking (the anti-biotic) Cipro, because fibrillation was a known side effect.

The doctor actually went and researched it for us, and found that Cipro was linked to ventricular fibrillation, not atrial, like I had.  That’s a whole different thing, and much more serious.  The atrium pumps blood into the ventricles at the bottom of the heart.  The ventricles then pump the blood out to the rest of the body.  She sited a study that out of 10,000 patients treated with Cipro, only 4 developed A-fib, which well below the margin of error.  I believe the term is “statistically negligible.”

There was any number of causes for the A-fib to recur.  Could have been the stress from trying to sell that extra ticket, the strain from the kidney stones and hurling, or it could have been taking that slug of ice-cold beer.  OR, it just could have been my time.  I just had a 6-year run of steady rhythm, so who knows?

Back in 2007, when Pinky talked me into getting the 2nd treatment, she found that the country’s foremost authority on A-fib, Dr. Calkins, worked out of Hopkins.  With a resource like that located right in our back yard, seeing him seemed like the obvious course of action.

So from the time I got to the ER, I told everyone that after my last catheter ablation surgery, Dr. Calkins told me I could get an immediate cardioversion if I got there soon enough.  I name-dropped the Big Dog every chance I got.  All they had to do was locate him or someone from his department, to advise on and approve my treatment.  Remember, the A-fib unit is closed on Mondays, so this proved more time-consuming than I’d hoped.

Meanwhile, they started getting me prepped for the procedure.  Right off, they put a saline drip into my right arm.  They were happily surprised that I knew not to eat or drink anything prior to coming in.  Like I said, I knew the drill.  In fact, I hadn't eaten since noon the day before, and had only sipped enough water to take my pills.  Of course, I was totally hungry and thirsty, but what can you do?

A nurse came in around 11:30 and said they needed to put me on a Heparin drip (a blood thinner), and it needed to go in my other (left) arm.  I wasn't crazy about getting stuck and tied down on both sides, especially since I had multiple lines running into a single line, just a few days prior.  I also know that there are always problems when trying to stick my left arm.  I’ve been told the vein there is a bit “rolly.”

I warned the nurse of that, and true to form, he couldn't get the line in.  When he suggested finding another location, I told him that they've gone in easily enough on the inside of my left wrist, so he should try there.  That one worked, so there I was, a line in my right arm, a line going into my left wrist, an abandoned stick on the left arm and a chest full of EKG wiring.

THEN, another doctor came in and said that they wouldn't need the Heparin drip after all; they would use a newer blood thinner called Xarelto.  I was like, “So you basically put all these holes in my arm just to piss me off?”

They said the port should stay though, as a backup for during the cardioversion.  I think that’s probably what they always say after a screw up, like when the dentist says, “Rinse.”

But now came the Catch-22 moment.  I had to take the pill with food.  But I couldn't have food before the procedure.  So the solution was that I got to put the pill one top of a single spoonful of vanilla pudding.  I graciously offered to take care of the rest of the pudding cup, but she shot me down.  What bummed me out even more was that neither the nurse nor Pinky wanted the pudding either.  I think I was more upset about wasting a perfectly good pudding cup than anything else that happened that day.

After that little flurry of activity, they said we just needed to wait for one patient before me to clear, then I’d go up to the A-fib unit for my procedure.  It was about 11:45.  I figured I’d be up in about a half hour, and on the way to work by 1:00.

So there we were at 2:30, still waiting around, and growing more annoyed by the moment.  Pinky and I played a couple games of 20 questions, took pictures with my iPad, and basically just tried to amuse ourselves. FINALLY, a nurse from the A-Fib Unit appeared; a guy I’d seen before at my last procedure.  He had a skull-cap bandana thing on, spectacles and a thick white beard.  He looked like a non-stoned Tommy Chong.  Anyway, he said there was a bit of a mix-up  The A-Fib Unit was waiting for the ER to bring me up; the ER was waiting for them to call for me to be brought up.  For two goddamned hours…   Sigh…

At least things were finally rolling again.  They wheeled me up and started prepping the site.  And by that, I mean shaving parts of my chest and back, specifically over my right pec and behind my left shoulder blade.  For my prior cardioversions, they put both paddles in the front.  As we waited for the doctor to come in, the nurse explained that now they’d have to sit me up, and zap me from the front and back.  I figured, “Whatever… I’ll be out cold either way.”

The doctor finally rolled in and looked over my case.  It was funny; he was like, “Why are we doing this and not that and why aren't we doing this other thing…” (Insert various medical lingo)

The nurse said, “Because Dr. Calkins said so.”

He was not being sarcastic.  It was then I realized that it’s good to have The Big Dog on my side.

Usually when they put me under, someone says something to let me know the anesthesia is coming, like, “It’s time to go night-night,” or “We’ll see you in a few minutes.”

This time, I was just sitting there, completely covered with wires and electrodes, watching all the ports on my IV, and then… there I was again with Pinky standing there and people fussing all around me.  Chalk up another one… I was back in rhythm again and none the worse for wear.

Pinky said I was talking all crazy as I came to.  Too bad she didn't use the iPad to grab some video.  You KNOW I would have posted that shit for you…

By the time I was back through the recovery room and discharged, it was pushing 7:00 pm.  So much for getting back to work, huh?  My email box would just have to wait for the next day.  We took the subway back to my office area anyway, but went to dinner instead of work.  It had been 31 hours since I’d last eaten.

I totally should have trash-picked that pudding.
Posted by bluzdude at 6:59 PM