If you've been visiting for a while, you must know my love for absurdity.  I live for those rare moments of inspiration where I get an idea in my head and it just spirals out of control, turning into something deliciously goofy.

Sadly, that didn't happen to me today.  But as I was scratching around for something to write about tonight, I recalled a favorite bit of goofy writing I came up with long before I ever had a blog.

It was 2001 and I was a single dude living here in Baltimore.  I was about two years into the online chatroom scene, and had “met” a number of people with whom I became good friends, despite never actually meeting in person.  There was one lovely lady up in Connecticut, with whom I corresponded for quite some time.  (What, you think I was chatting up dudes?)

We emailed regularly for about 8 years, without ever meeting.  During that time, we dealt with her divorce, buying her own house, and eventually establishing a relationship with a new guy.

In one long email on the Friday after Thanksgiving, out of nowhere, she dropped this bomb…

I was highly amused, because we never talked about sex.  This was very much unlike her.  So I worked up this high-quality response, which still cracks me up.

“Lets see, what should I talk about?  Oh, I know, I'll start by apologizing for not writing last night.  You see, I couldn't write because MY EYES popped out of my head, and rolled under my computer desk.  Took me hours to find them, what with not being able to see, and all.  I'd be under there looking, and then remember why they popped out, which would cause me throw my head back in shock and amazement, and in turn,  klunk it on the bottom of the desk.

Eventually, I'd regain consciousness, but it would be tough to tell, because I couldn't see from my eyes being out.  Anyway, after seemingly hours of feeling around, repeated klunking and waking up, I managed to find my eyes again and put them back in.  Of course, I had to wash'em off first...you know what it's like when you get dust on your eye.

Y'know, you'd think that if you held an eye up and pointed it at something, that you'd still be able to see, but it doesn't work that way. 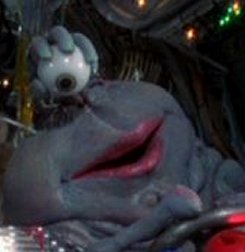 
Go figure. But still, any further writing for the day was out.  I've always heard that computers are hard on your eyes.  I guess it's true.

Anyway, after gathering my wits and faculties about me, I only have one thing to say:

Southwest Airlines, 5 to 8 flights a day between Baltimore and Hartford, $124 or less.

It's so nice to hear when someone has a problem that I can easily help with and make better.  Always willing to help, I am....  Always at your service....  snicker...”

If I had been making more money at the time, I totally would have popped for the ticket.  I was hoping she’d “Wanna get away,” but no such luck.  I thought it was pretty selfless of me to try and solve her problem.  She probably couldn't take me seriously any more, after that “eyeball” riff.

It’s tough being both a comic and a gentleman, sometimes.
Posted by bluzdude at 8:18 PM