Most cities have that one thing embedded in their culture that makes them unique, whether it’s something geographical, architectural, or just being the way they are.  Here in Baltimore, it’s the “Hons.”

Hons are female throwbacks to the 1950s and 60s.  If you've ever seen the movie (or play) Hairspray, you've seen them.  Characteristics include beehive hairdos, cat’s-eye glasses, garish makeup, feather boas, big jewelry and lots and lots of leopard-print clothing.  They are also seen in mumus and housecoats.

I don’t know if there’s an analogous male “Hon,” but if there is, it’s probably a dude in a dirty white wife-beater, plaid Bermuda shorts, beat up Orioles hat, black socks and sandals, holding a Natty Boh.

I’m not sure how they came to be called “Hons;” I assume it was due to something that’s frequently said, like, “Welcome to Baltimore, Hon,” That’s usually pronounced, “Welkum ta Bawlmer, Hawn.”

Every year, in a Baltimore neighborhood called Hampden, they put on the HonFest.  This is a weekend street-fair with food and music that celebrates all things “Hon,” including the Baltimore’s Best Hon contest.  That’s where we went today.

Hampden is the hive of Hon-dom, featuring the Hon Café, as seen on that show where Chef Gordon Ramsay comes in and yells at everyone until they do things right.  But it’s a quirky neighborhood in general, as evidenced by this sign I saw at a local hardware store. 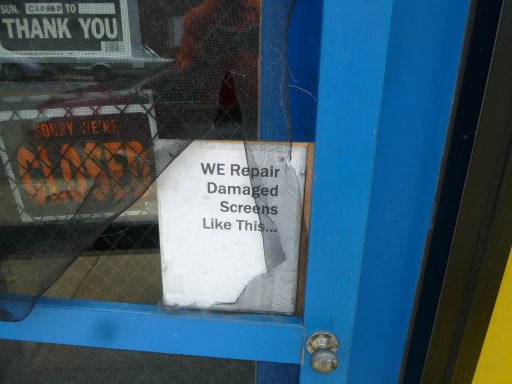 Wouldn't it be better just to fix the screen?

They also have a permanent nod to the Flying Spaghetti Monster, which makes the place A-OK with me. 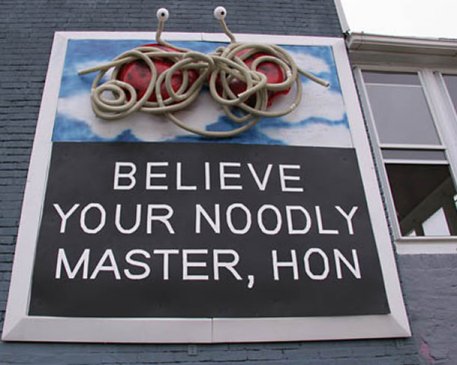 They have a couple of stages set up.  The one we passed had the local School of Rock group playing. 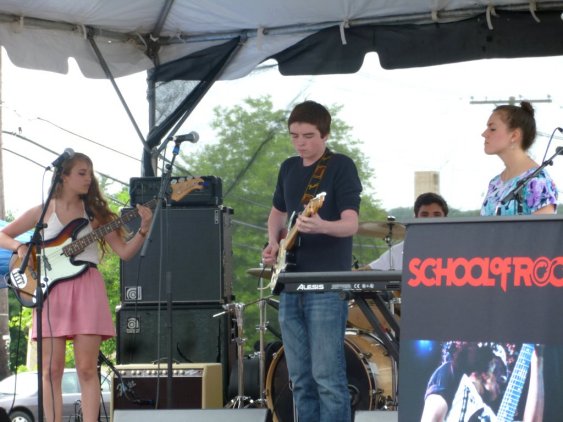 No sign of Jack Black though.  But regardless, these kids could rock.

Right off the bat, we were surrounded by Hons. 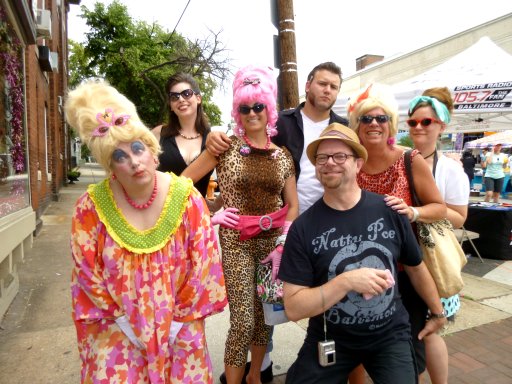 I’m not sure if the leopard print on the right is a gal or a dude. 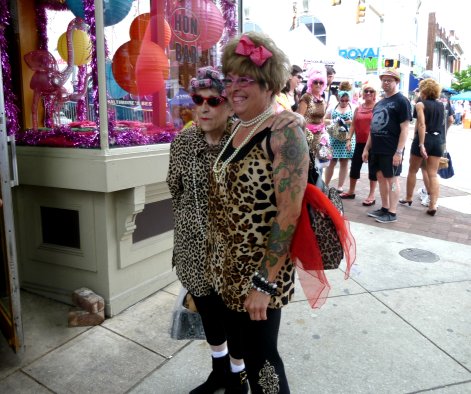 We jumped into their table at the Café Hon bar (called Hon Bar, of course).  We wanted to go somewhere we could sit down.  Our table was right up in the window, so I was able to grab a couple more pictures through the window. 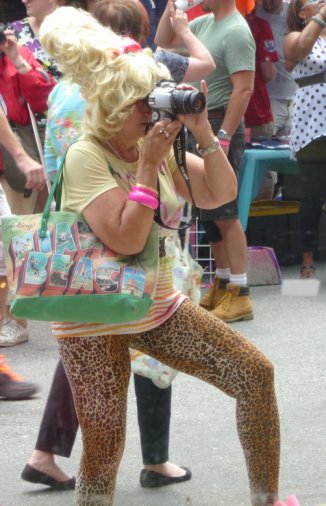 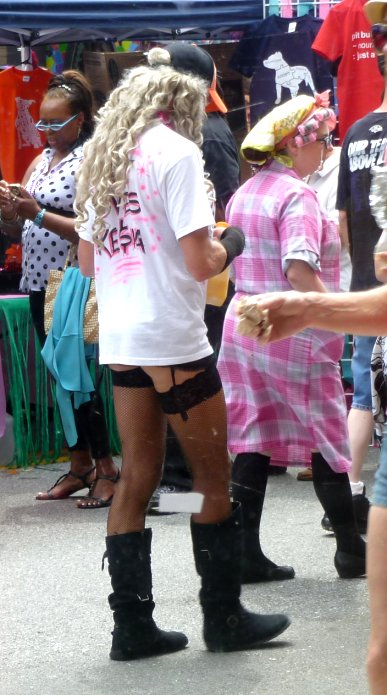 This is not how I pictured a Hon Dude.  Apparently, HonFest is where Bawlmer comes to get their freak on, too.

After lunch, we went to the main stage to scope out the Baltimore’s Best Hon Contest talent portion.  We weren't disappointed.

We had Guitar Hon: 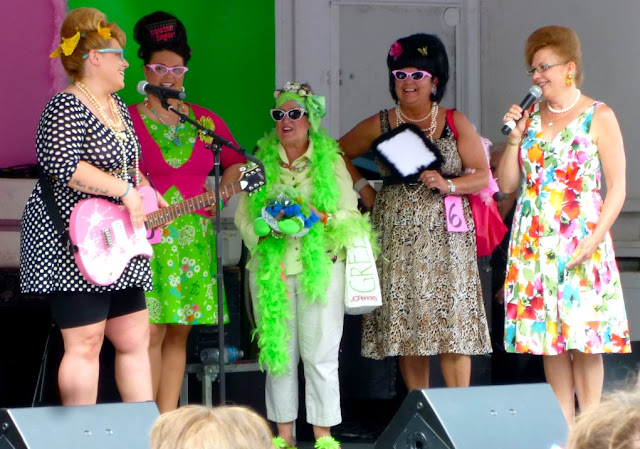 There was a Singing Hon: 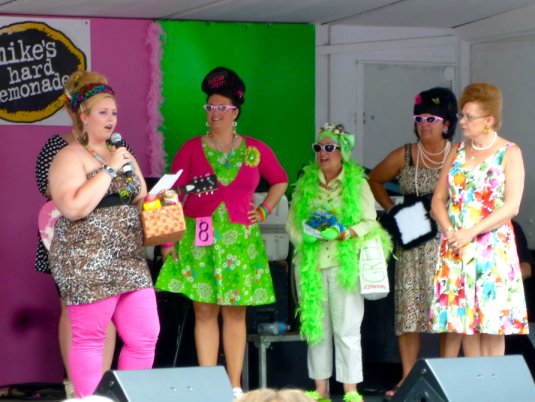 There was Hula Hon: 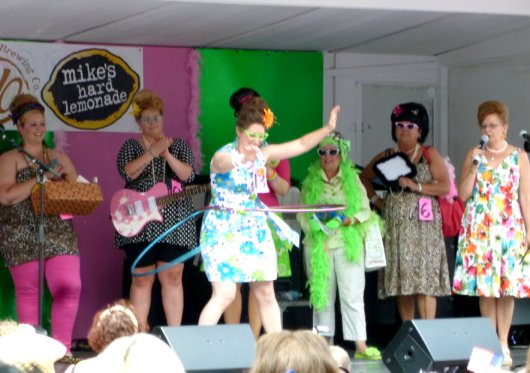 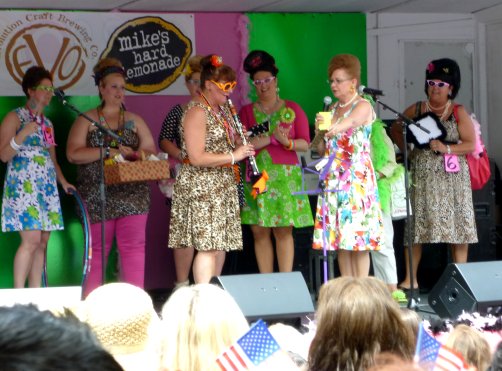 We didn't stay around long enough for any winners to be picked.  It was starting to get a little warm and our retinas were burning from the sights, so we raced home to seek the coolness of the A/C.

So tell me, what does your town do to get its fix of “kitsch?”
Posted by bluzdude at 5:15 PM

Email ThisBlogThis!Share to TwitterShare to FacebookShare to Pinterest
Labels: Baltimore Bluz, Picture This