Now How About Quentin Tarentino as C-3PO?

I’ve seen a number of stories lately about the upcoming (in a couple years) 7th Star Wars film.  Now that George Lucas has sold the franchise to Disney, they’re wasting no time in getting the Empire back together to continue the story of the Force and the Jedi and the Sith, et al.

Last I saw, both Mark Hamill and Carrie Fisher were interested in reprising their roles as Luke and Laia, and they were trying to land Harrison Ford.  One guy who I know is waiting for a call is Samuel L Jackson, who played Mace Windu in the 4th through 6th movies (aka Parts 1-3).  He said he’d love to play in any and all upcoming Star Wars movies, regardless that his character is presumed dead.  Face it, that never stopped anyone else in the Star Wars universe. 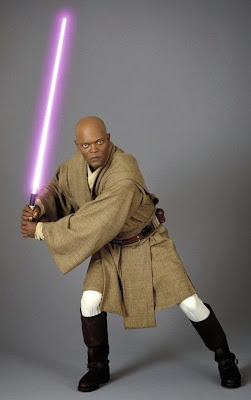 Back in 1998, when it was announced that he would be playing a character in “Phantom Menace,” (Part 1), my cousin sent me an email listing the Top 10 Things We Want to Hear Samuel L Jackson Say in a Star Wars Movie.

Because it seems to be coming around again, and I can’t think of anything intelligent to write about tonight, I thought I’d reproduce it here.

Note 3: This post won’t seem nearly as funny if you’re not familiar with both the Star Wars world, and Sam Jackson films (mostly “Pulp Fiction”).  (Mom and Dad, you may be excused.)

And now, the Top 10 Things We Want to Hear Samuel L Jackson Say in a Star Wars Movie.

10.  You don’t need to see my goddamn identification, ‘cause these ain’t the motherfuckin’ droids you lookin’ for.

9.  Womp rat may taste like pumpkin pie, but I’ll never know, ‘cause even if it did I wouldn’t eat the filthy motherfucker.

8.  This is your father’s lightsaber.  When you absolutely positively have to kill every motherfuckin’ stormtrooper in the room… accept no substitutes.

7.  If Obi-Wan ain’t home then I don’t know what the fuck we’re gonna do.  I ain’t got no other connections on Tattooine.

3.  So Jabba the Hutt threw Chewie Rocky Horror through a third floor window.  Since then, it seems the Wookie has developed a speech impediment.

1.  Hand me my light saber… it’s the one that says “Bad Motherfucker” on it.

One of my favorite movies is “The Long Kiss Goodnight,” where Geena Davis plays a badass CIA assassin with amnesia and Sam Jackson is the comic relief, if you can believe that.  Anyway, my favorite SLJ quote can be found early on in the movie, which I will end with right here.

“You’re assuming I won’t shoot your sorry ass.  And as you know when you make an assumption, you make an ass out of you, and umption.”
Posted by bluzdude at 7:09 PM