These are weird times and I don’t know what I’m doing.

Maybe you've noticed that my last several posts have basically been re-postings of other stuff, rather than my customary original, or at least marginally stolen material.

The thing is, I feel like I’m running out of stuff to write about.  It seems like I've said everything I can say about any given subject.  Because let’s face it; there aren't many new subjects surfacing.  Everything in the news seems like we've seen it before.

Republicans and Democrats still disagree on everything and will tear down the country before one will accommodate the other.  Fox “News” is still manipulating their presentation of current events in order to obtain and preserve power for conservatives.  People are fighting with each other over all the societal issues… abortion, birth control, gay marriage, fracking, drilling, gun control, voting rights, health care, food stamps, censorship, and the Kardashians.

At one point or another, I've covered all of it, multiple times with some.  I mean, look at each of those issues and guess which side I come down on.  Easy, right?  So commenting on the news has become an exercise in deja vu.  Contact the Department of Redundancy Department.

Regarding my own life, nothing’s happening.  I get up, go to work, come home, cobble together a post on Tuesdays and Thursdays, watch TV, go to bed.  Repeat.  While I’m perfectly happy with that routine, there’s not much worth writing about, without getting into the minutiae of the moment.  I mean, if I want to do that, I always have Twitter.  I don’t want this blog to devolve into nothing but photographic evidence of what I had for dinner every night.

I love to tell stories about my wild past, about family, friends and whatnot, but by now, I've already told all the best ones.  There may still be a few floating around, but none that really excite me to tell.  (And if they don’t even excite me, how can they excite you?)

I've cut way back on sports, mostly because I’m not writing for a primarily Pittsburgh audience anymore, so when I lead with a Steelers or Penguins story, I suspect there’s a lot of, “Oh, more Pittsburgh bullshit.  See you next time.”  I've even cut out the mojo stuff, because even though I’m still actively working the game jersey mojo for every game, I've already done it to death on the blog.  It’s a long running joke, to which I don’t have anything new to add.

I suppose could just claim a Sabbatical and walk away for a while, but I know how that goes.  Out of sight, out of mind.  It’s not like I’m getting flooded with hits right now; how hard will it be trying to get back even to this level after a prolonged absence?

I look back at old posts and see how I used to get 10-12 comments per post.  Now?  Three or four.  It makes me wonder if I’m doing anything differently, or if people just naturally move on to seek newer and fresher things.

I love the writing, telling stories, entertaining, and interacting that goes with doing a blog.  But sometimes that love ebbs and flows, and blogging becomes more of a chore than a reward.  I've gone from “Oh boy, I can’t wait to sink my teeth into this (issue/story/series),” to “Aw, crap, I need to do a Tuesday post, and I got nuthin.”

Today, I was going to use an idea I literally stole from my fine Buckeye friend, Uncle Crappy.  He found a site where you can make a map that shows every state you've been to, and color it accordingly:

So I took 5 minutes and did one, so I could post it here. 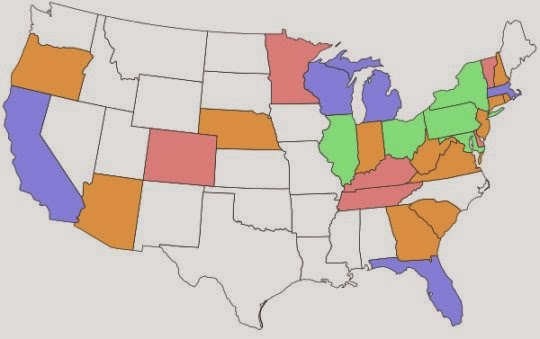 Yeah… BFD, as we used to say.  What is there to say about it, other than I need to go visit the south-central and northern plains states?  And that I need to collect North Carolina for no other reason but to fill in the hole.

Note: Hey Mom and Dad, did we ever hit Maine when we did that big New England vacation back in the mid-70s?

Now here I am, having just produced a post out of my own malaise.  I’m in the clear until Thursday and then I’m back in the same boat.

If you’re a blogger, what do you do when you run out of ideas, or you just feel stale?

More importantly, blogger or not, what would you like for me to write about?  If you've read me a while, what is the role you like me in best?  Raging politico and cultural whistle-blower?  Spinner of old yarns?  Purveyor of the absurd?  Music and film critic?  Chronicler of personal adventures?  Seeker of human truths?  Navel-gazing self-analyzer?  Joke of the moment jukebox?  Feel free to create your own label for whatever it is I do that entertains you.

I’m curious to see if there is a predominant answer.  I sure don’t have any.
Posted by bluzdude at 7:35 PM