The GOP Civil War and Obamacare

I’ve been watching with amusement, over these past months, as the Republican party tries to bring their factions together after losing some key elections in November, while simultaneously tearing themselves apart.  This week’s budget deal was fertile ground for dissention, as Majority Leader Boehner finally grew a set, and called out tea party leaders and outside conservative groups, for criticizing the bipartisan deal.

Obviously, Boehner and the GOP establishment learned that when they shut down the government, people notice and blame them, despite creative efforts to shuffle the blame to the Democrats.

The Republicans are in a spot.  Traditionally, conservatives’ primary mission has been to prop up big business, by all means possible.  Most often, that means maintaining expensive, government-funded programs and tax breaks that benefit the chosen few, despite the constant rhetoric of “smaller government.”  (What they mean is smaller government for “us.”)

This is coming into conflict with the Teabagger faction, who actually wants smaller government and less spending (in areas that don’t benefit themselves, personally).  So the tug-of-war is on.

As for me, I remain a bemused spectator.  As long as they’re fighting among themselves, they’ll never wage effect campaigns for national office.  The people have shown that aside from some secure, heavily gerrymandered districts, they don’t like operational dysfunction.  They want the bills paid, roads cleaned, fires put out, and the trains running on time.

But it’s not like they’re completely ineffective.  Just look at the ACA website.  Sure, it’s been a disaster and the rollout was poorly executed.  But did you think conservatives were just going to let it totter out without some added roadblocks?

What most people don’t know is that there has been an orchestrated effort by conservative groups to wage a “denial of service” attack on the site, to further weaken confidence in Obamacare.  That’s right.  The GOP is actively working to disrupt the system and simultaneously criticizing Obama because the system isn’t working.  (Just like they’ve been doing in Congress for the last 6 years.) 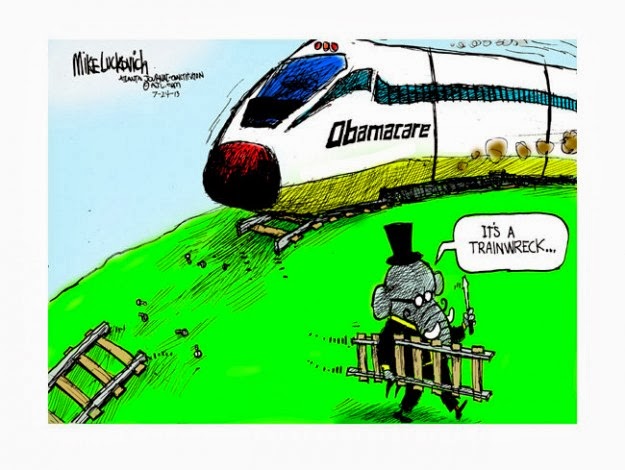 This information was disclosed in a video from a hearing by the Homeland Security Committee, where acting assistant secretary of the Department of Homeland Security’s office of Cyber-Security and Communications, Roberta Stemphley, confirmed 16 separate cyber attacks on the ACA portal.  Right-wing websites have been distributing the tool to carry out these attacks, calling it, “Destroy Obamacare.”

That all sounds pretty official, so why don’t you know about it?  Here’s why.  The Republicans don’t want anyone to know that their people are behind these attacks, because it undermines their credibility.  And the DHS and Democrats don’t want to give these tools and websites any more publicity than they already have, so to lessen the severity of the attacks.  All sides pressure news organizations, which will not do anything that is going to cost them access to party VIPs.  We must never forget that cable and network news shows* are not interested in educating or informing the public; they are interested in getting you to watch.  Period.

*This obviously excludes Fox “News,” whose only goal is to energize existing conservatives and generate new ones.  Which is not really news.

So the American people are left to believe that the ACA site is a mess purely because Obama fucked it up.

So I’m happy that the GOP is fighting with itself.  The more shit they throw at each other; the more rational people wonder what they ever saw in them.

I wonder if there are any rational people left?
Posted by bluzdude at 1:01 PM