Chatting It Up Part 4: Virginia Girl

My chat relationship with Island Girl was always more of a flirtatious fling than the honest pursuit of a relationship.  The same goes for most of the people I interacted with in the chat rooms.  But there was one exception…

It was around the year 2000 and by then, I was a regular in a particular room in Virtual Places (VP).  I began noticing another regular, who always seemed to laugh at my jokes.  Her online name had a misspelling in it; she told me it was a typo when she set up her account, and didn’t even notice it for a while.  She kept it, because she thought it was unique.

We circled each other cautiously for a while, and I began to specifically try to make her “LOL.”  Her handle had a beach motif, so one night, I asked her if she lived near a beach.  She said she did… a Virginia beach, as it were.

Now THAT piqued my curiosity.  Virginia is just one state down from Maryland.   We were practically neighbors.  It was the first time I was connecting with someone from the same general vicinity.  That meant there was a possibility of meeting, and maybe more.  That changed the game, right there.

One night, probably a Butt Friday because we were both sporting human avatars, we got into some kind of wild conversation in the room, probably in IMs (instant messages).  Someone was flipping their avatar back and forth (meaning rapidly changing between the avatar’s regular image, and a mirror image).  I said it looked like it was dancing.

With that, I dragged my avatar over near hers and asked her to dance.  We both started flipping our avatars and it totally looked like they were dancing together.  I don’t know about her, but I was smiling my face off and giggling like a fool.  After we cooled off, I nudged my avatar over to touch hers, and they “joined.”  (As explained in my first chat post, when you put to avatars together, they’d “latch” onto each other, which signified to the room that you were a pair, at least for the time being.)  In the months to come, we always looked back fondly at “The Night We Danced.”

After that night, we joined up like that every time we were both in the room.  We started having long, involved IM sessions as we tried to learn all about each other.  She was divorced, with three kids; her son was a junior in high school, and two daughters were lined up behind him.  The son was in a special program in school for gifted kids.

Eventually I suggested we swap pictures.  I mean, that’s the make or break moment, isn’t it?  That’s when you find out if the person you’ve been shamelessly flirting with is hot, medium, or looking like she just got out of a dryer filled with rocks.

Most of my previous chat partners belonged to the latter two categories, so I didn’t have high hopes.  But then I opened the picture and was stunned.  I thought she was gorgeous.  She was on a park bench in front of a fountain, wearing jean shorts, a sleeveless sweater, and little round spectacles.  Holy shit, I was smitten.  I showed the pic to my work friends, Sunshine and the “Sisterhood,” and they agreed.  I’d say she looked a bit like a younger Kathleen Turner.

All I kept thinking was, “There’s no way a girl this hot is going to dig a goofy-looking putz like me.”  But I guess there’s something to be said for wit and sparkling conversation, because she dug me too.

We chatted thought the summer and by fall, we figured it was about time to meet up.  We agreed to meet in Richmond, which was roughly halfway between us.  I booked a room for a Friday night at an Embassy Suites.

I got there first (as I planned to) and set up the room.  I brought a CD player, some flowers, snacks, and wine.  I wanted everything to be perfect.  Man, I was so nervous.  All I could do is pace around the lobby, and peer out the front window, looking for her SUV.  Since I didn’t have a cellphone yet, I had no idea when she was going to arrive.  I commiserated with the hotel staff behind the desk, as I was pacing around.  Before long, they got the whole story.

But then there she was, pulling into a parking spot across the lot.  At least I think it was her… I took a few steps outside to look closer.  Once she got out of the car, I knew.  I went trotting over to her, then she started running over to me.  We must have looked like a couple of dodos out there, pretending we were in a movie, but I didn’t care.

We ran into each other’s arms and hugged hard.  We’d hug, then pull back and look at each other, then hug again.  She never let go.  We walked into the lobby with one hand carrying her bag, my other arm around her shoulder, and both her arms around my waist.  I shot the desk clerks a wink, and they gave me a thumbs-up.

I could probably do an entire post on the next 12 hours, but suffice to say, it was a very good night.

In fact it was so good, I couldn’t bear to say goodbye.  The time went by way too fast.  We decided that I’d follow her down to her place, I’d stay over Saturday night, then drive home on Sunday.

And that’s what we did.  I met her kids, we all hung out, and played board games.  They were really great.  I was still rocking the full beard, so her son told me I reminded him of Toby Ziegler, from “The West Wing,” which was in its first season.  I’d hadn’t seen West Wing yet, but when I started watching it the next season, I realized that I should have taken it as a compliment.  Toby may have been goofy looking, but he was cool as hell. 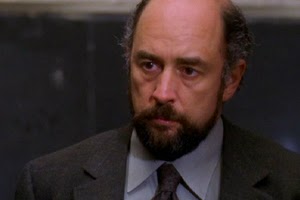 Not bluzdude, but close.  (Source)

We continued to chat, email, and call as much as we could.  Because she mentioned once that she loves dolphins, I sent her a dolphin wind chime for Christmas.  It went over very well.

I made the 4.5 hour drive to see her again over Valentine’s Day.  I met her ex-husband, when he came to pick up the kids that night.  Did I mention he was the local sheriff?  Yeah, that was mildly terrifying.

This night didn’t go nearly as well.  She must have caught some kind of bug that day, because shortly after we started eating dinner, she felt sick, and began throwing up.  And she continued hurling roughly every half hour until the wee hours of the morning.

I felt really bad for her, but there wasn’t anything I could do.  She certainly didn’t want me in there with her, holding her hair back…  (That was a win for me, I guess).

We continued with the IMing and emailing and calling, and even discussed her coming up to live with me.  Now that was not something I was pushing.  This was her idea.  It wouldn't be right away… she wanted her son to graduate from high school in the program he was in.  Then once he went away to college, she and the girls would move up.

It was OK with me.  I was still completely smitten with her, and her kids were great.  I tried to warn her though… Baltimore schools are a tough gig, unless you’re well-to-do enough to pay for private school.  I couldn’t very well say, “Here, come to Baltimore!  We have shitty schools, rotten infrastructure, idiot drivers, governmental corruption and almost 300 murders a year!  And the Ravens.”

There was also the matter of her job.  She worked at a hospital as a licensed professional, but in Virginia, you could get licensed with a bachelor’s degree.  In Maryland, you needed a Masters.  So getting a comparable job would be problematic.  In fact, I knew it was going to be a huge problem, because I certainly didn’t make enough to support 3 more people.

Through the spring, though, the talk of moving up here kind of dwindled away.  We didn’t talk as long, or as in depth.  There were fewer statements of affection and days would go by without meaningful contact.  I felt her pulling away from me, and knowing how difficult the reality of how hard it would be to try to stay together, I let her.

We never had a grand farewell, or any kind of breakup speech.  There was no, “How could you?” or “I can’t do this;” we just kind of faded away.  It was sad, but I didn’t see much alternative.  There was no sense in chasing her because I wasn’t leaving my job to go there, and it would be too much for her to come here.  Turned out that Virginia was as far away as any other place on the map.

Every once in a while, I’d see her drop by the old chat room, and we’d catch up.  She ended up moving somewhere else in Virginia, I forget why.  The last time I heard from her was in 2003.  We wished each other well.

And we never forgot The Night We Danced.
Posted by bluzdude at 6:31 PM