Walking the Walk and Locking the Lock

As I mentioned a few posts back, I was considering actually going on the March of Dimes March for Babies.  Because I couldn’t really come up with a legitimate excuse not to do it, short of complete sloth-like lethargy, I decided to do it.  The big event was last Saturday.  Mostly, I was happy that in the March for Babies, you don’t actually have to “march.”  An hour of Sousa is enough to break even the strongest among us.

I felt like I was in good enough shape… nothing was hurting me at the moment, and I’d just bought some Dr. Scholl’s gel pads for my shoes.  I was ready to mosey!  The route began right outside M&T Bank Stadium, aka the Home of the Ratbirds, aka That Big Purple Toilet.  I don’t know how far we had to walk exactly… it was four miles and change. 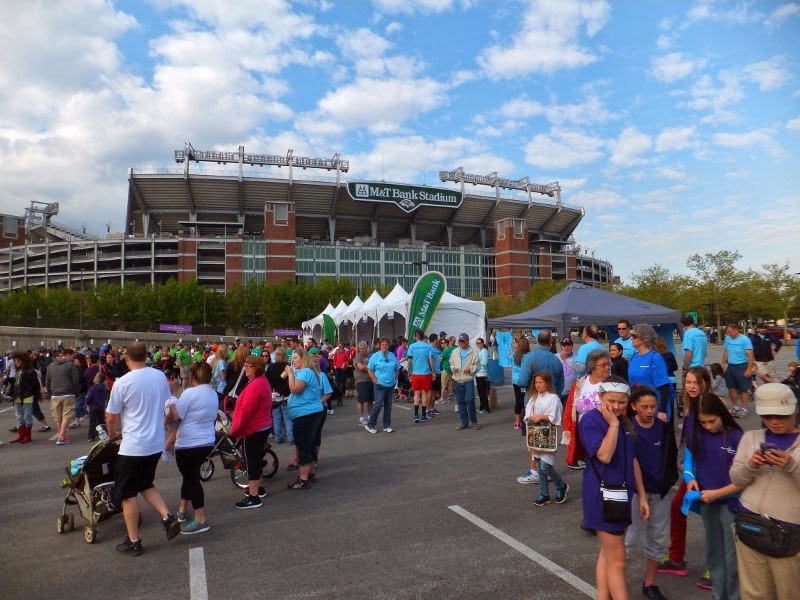 There were about 20 of us from my company, and because we were last year’s highest fund-raisers, (and probably again this year), we got to cut the ribbon and start at the front of the pack.  I eased up beside a friend of mine, who was pulling his 4-year old daughter in a wagon.  My friend Jenn was there too, but she and her girlfriend were running rather than walking.  No chance I was going to keep up with them for more than 20 or 30 yards, so I bid them an early goodbye.

It was a nice enough route, out past Camden Yards, all around the Inner Harbor, then back down Pratt St. and straight back to the starting point. 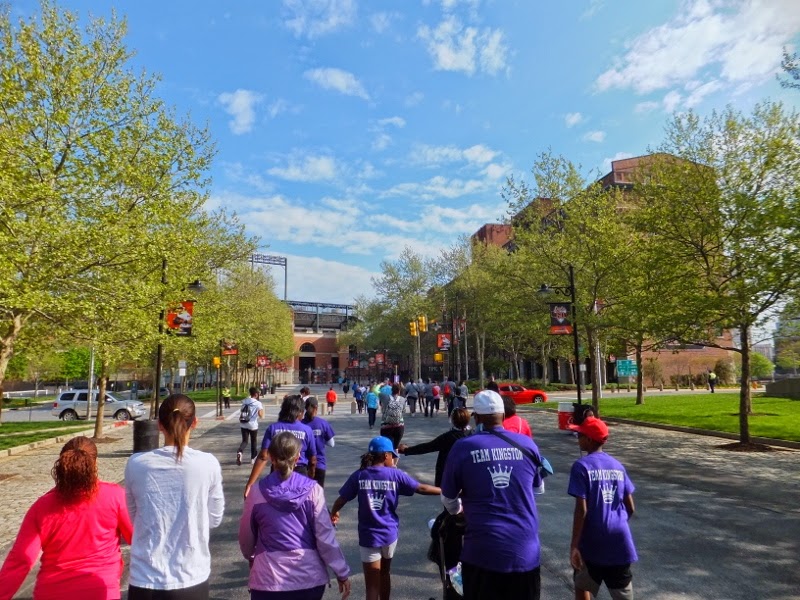 My friend and I knocked it out in an hour, without much trouble.  I especially like how the cops would stop traffic for us walkers to cross the street.  Good thing we weren’t all bunched up… our pack was so long, it made a funeral procession look like a tandem bicycle.

We walked between 9:00 and 10:00, which was good, because it was still cool outside.  It was a nice morning for a walk, and the Inner Harbor was a picturesque as ever. 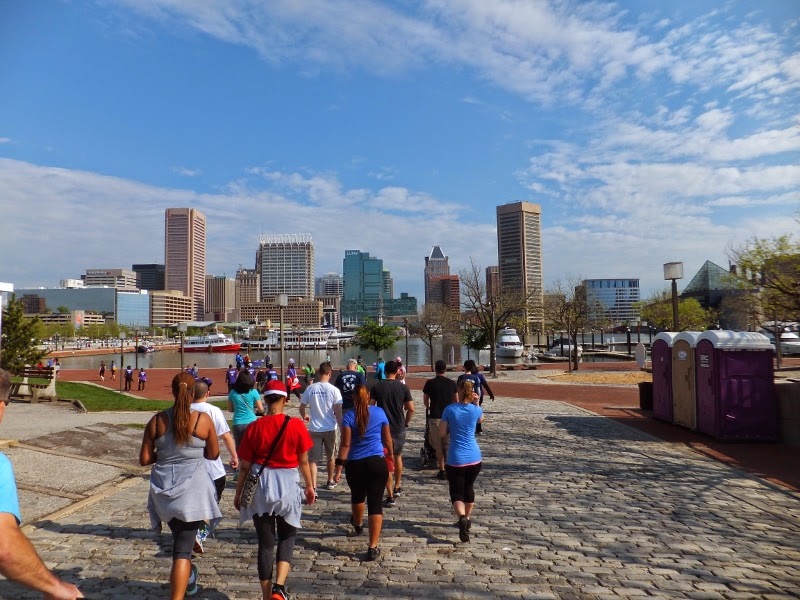 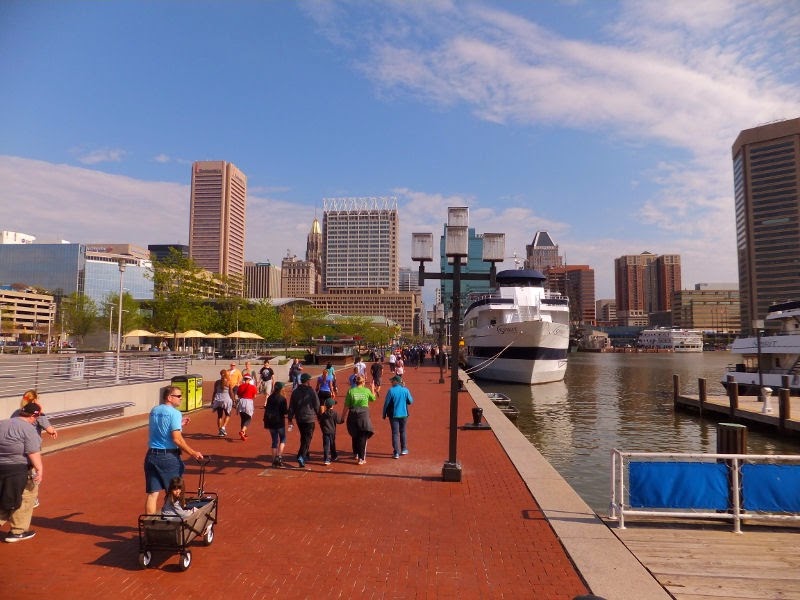 Approaching the city, from alongside the harbor. 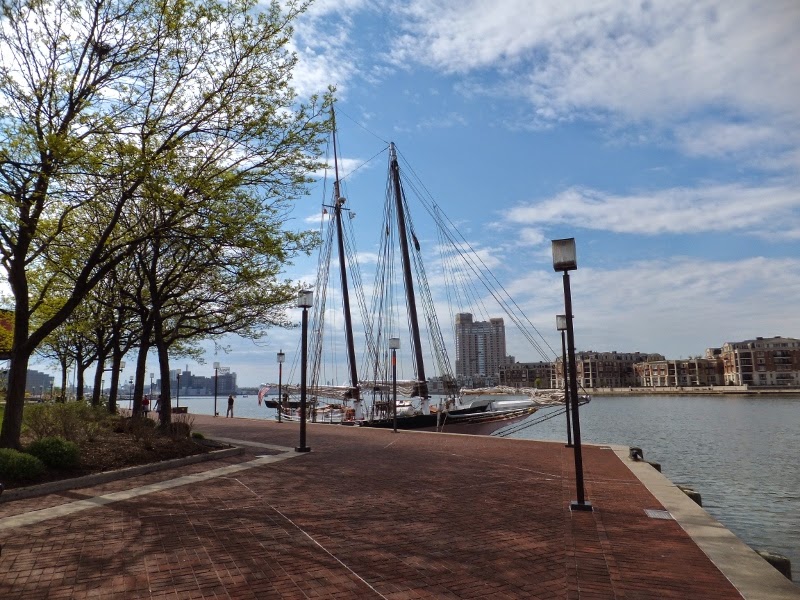 Ah, my ride is here…

There had been a local band performing at the onset of the walk, so I wasn’t surprised that they had an act for the conclusion.  While we drank our waters and ate bananas and breakfast bars, we were treated to the worst Bon Jovi impersonator ever.

They introduced this skinny guy in a dark 80s-era rockstar shag wig, who went up there to perform a karaoke medley of Bon Jovi’s Slippery When Wet album.  I swear, when he broke into “Wanted Dead or Alive,” I was hoping they’d bring out a Ritchie Sambora impersonator, to at least try to bring it in on key.

The only people who enjoyed the show were this dance troupe, a squad of about 20 girls from 8 to 15 years old.  I can only assume they thought he really WAS Bon Jovi, and 80s music was worse than they’d thought.

After the fourth song, the aural assault finally came to an end, and shortly after that, I made a break for it.  I went home and read the paper, caught up on email and online news, like I usually do on a Saturday morning.  But then when I got up again… uh oh.

Sharp pain in the back of my right knee!  Now what the eff have I done?  And I thought I got away clean…  I’ve iced it and taken some anti-inflammatories, but it’s still bugging me now.  I suppose it will work itself out in time.  (Yes, if it continues for too long, I’ll see a doctor.  Maybe.)

On Sunday, I wanted to go get a haircut at the local Hair Cuttery.  (No, I didn’t get it shaved, just cut short.)  After getting caught up in the spirit of walking, I decided to walk to the shopping center, a half mile away instead of driving.  I was so proud of getting there and back in 20 minutes.  (The actual cutting of the hair took roughly three of those minutes.)  Unfortunately, the cocky attitude dissolved when I got home and realized I locked myself out of the apartment… without my cell phone.

I’d forgotten I’d given my buddy John my house key last week, for the day I was supposed to go to the Orioles game with Jenn, and I never did put it back on my “spare” keyring.  So Sunday, I had grabbed the spare, because it’s smaller and creates less of a lump in my jeans pocket… I usually take that one when I go out to run errands.  I might have been temporarily homeless, but the line of my jeans looked good.

The degree to which I considered the first three options just goes to show how much I hate talking to strangers.  I don’t know my neighbor any more than in passing.  He’s kind of a sad sack, a scraggly white guy whose name, for the point of this post, will be “Daryl Licht”)  Many nights, on the way into my place, I detect the scent of ganj coming from under his door.

I considered knocking on one of my other neighbor’s doors, but Daryl and I are the only non-Jews in the building.  It was still close enough to Shabbat that I don’t think they’d even open the door for swarthy goyim.  It would be justified revenge for my screaming by them in my car every Saturday afternoon, blaring Highway to Hell on the stereo, while they’re walking to Temple.

So facing no realistic alternative, I knocked on his door, and he placed the call for me.  The landlord’s office is closed on the weekends, so he had to leave a message and have them call back.  His place smelled he was hosting a poker party with Tommy Chong, so I opted to wait outside.

While I was out there, I strolled by my windows.  That’s when I noticed that the window for the back bedroom wasn’t securely locked.  The little swivel things weren’t latched under the slot on the upper window frame, they were above it, in other words, not locked at all.  One of the previous girlfriends must have left them like that.  So I pried off the screen (because they’re bendy), opened the window and blinds, and slipped inside.

By that time, Maintenance had called the Daryl back, so I was able to come back out and have him tell them, “Never mind.”  Then I went back in and properly locked the windows.  I just wished I would have looked out there first, before talking to the neighbor.

In retrospect, it’s probably a good thing I only got my hair cut, and not shaved.  No one noticed me going in the window.  But I bet if I looked like a skinhead, the whole Volunteer Neighborhood SWAT team would have descended on the place, shouting “Never again!  Never again!”