As I was walking to the subway today, I noticed the pigeons.  I should say, I see them every day, but I seldom give them much thought, other than how much PittGirl would hate to have to walk this route every day.

Today, I thought back to a time when I was fascinated by pigeons.  See, I was in London…

When I was in junior high, I took a class trip to Paris and London, over spring break.  (And I really ought to do a post on that, some time.)  For this trip, it was the first time I had my own camera.  It was a crappy little 110-Instamatic.  Not that it matters, but it looked like this: 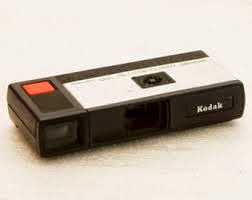 You had to use those 4-sided flash cubes with it.  (Not pictured.)

Anyway, there I was, ambling around the streets of London… I forget where the rest of my crew was.  But I came upon this bunch of pigeons on the sidewalk, by a fountain.  As a kid that rarely spent time in a city, I don’t think I’d ever seen pigeons before.  What I couldn’t get over is how close you can get to them.

My only experience with birds were the usual, garden-variety backyard birds… robins, jays, sparrows, cardinals, etc.  And none of them let you get anywhere near them.

But these pigeons, they were completely ambivalent about my presence among them.  So I did what any budding photographer would do… I took pictures.

I was standing there in London freakin’ England, surrounded by famous landmarks, classic architecture, and statues of famous dead people, and I’m shooting a roll of film on fuckin’ pigeons.  Ha!

To be fair, I also shot a ton of pictures of the ducks and swans on the river behind Ann Hathaway’s house.  (Shakespeare’s wife, not Catwoman.)  I spent an inordinate amount of time baiting a swan into snapping at me, to try to get an “action shot.”

But my point was, I thought it was so cool to see real “wild” birds up close, (as opposed to parakeets and canarys, like my Grandma had), and that’s what I was reminded of as I saw today’s pigeons.  (Yes, I stopped taking pictures of the pigeons long ago.)

But that thought reminded me of a story I’ve been meaning to put on my “Blog Idea List,” but never remember at a time when I have access to my list.  (I swear, I have the useful memory of a goldfish any more.)

Back when I was very young, about first grade, it was the birds that taught me a life lesson about girls.  I just didn’t know it at the time.

When we still lived in Pittsburgh, there was a little girl about my age, who lived across the alley behind our yard.  We used to get together and play, every so often.  I think her name was Linda.  I believe she had a brother named John-John, which I thought was completely ridiculous.  I was 5, what did I know from the Kennedys?

Anyway, one evening we were playing on the swings in our back yard when she came up with a really fun activity for us.  She wanted to torment another girl, a younger neighbor of ours, and this was her plan to do so:

I believe that was my first-grade equivalent of “WTF is the matter with you?”

Then, in an exchange that would repeat itself throughout the rest of my life, I tried to use reason and logic to get her to give up this psychotic idea.  (I really just wanted to go back to playing on the swings.)

I said, “But if birds can hear the worms underground, (which, duh, how else do they know where the worms are?), they’re going to hear us coming and fly away.”

She glared at me like she was considering using MY guts, and said sharply, “We’ll.  Be.  Quiet!”

Well, knowing there was no way we were going to catch any birds, I went along with her little scheme.  The next half hour consisted of us slowly trying to tiptoe up to a bird and it flying off whenever we got within 15 feet of it.

She said, “You’re being too noisy.”

I should have known right then that I’d be better off just running away to a monastery or something, because these girls were going to be trouble.  They just weren’t wired the same way as boys.

It’s good that we moved away from that house when I was 6, so I was never tempted to go out with her and try to “fix” her.  I never knew how the girl turned out.  I can probably assume that she’s either living in a 2-room shack, making some dude miserable, or is under heavy quarantine at the local women’s prison.
Posted by bluzdude at 7:49 PM

Email ThisBlogThis!Share to TwitterShare to FacebookShare to Pinterest
Labels: Bluz LIfe, Stories and Misadventures, The Burgh