As I mentioned in my previous post, the only way to “fix” the Supreme Court decision allowing closely held corporations to deny birth control coverage if it is contrary to their sincere religious beliefs, is for Congress to pass a remedy bill.

Senate Democrats began this process yesterday, introducing the “Not My Boss’s Business Act.”  Democrats are introducing a similar bill in the House.

Unfortunately, I don’t see any of this doing any good in the foreseeable future.  They may get the bill passed in the Senate, but I don’t think it has a prayer in the House.  I’ll be surprised if Speaker Boehner lets it come up for a vote.  Probably won’t even get out of committee.

Obviously, it’s a political maneuver on the part of the Democrats, to get as many Republicans on the record as against women’s reproductive freedom as they can, so they can beat on them in the mid-term elections.  And I don’t have a problem with that.  They need to run on what they stand for, and Republicans are against anything that has to do with Obamacare, period.  If that’s their stance, then they have to defend it.

What’s cracking me up (in the story I linked above) is how Mitch McConnell is calling out the Democrats on conducting “show votes.”  Here’s what he said:

“We’d have a better chance of working our way through bills that we need to pass if we cut out the show votes and didn’t eat up time trying to score points for the fall elections.”

Yeah, Mitch, those are just show votes… not something important and vital like trying to overturn the ACA by holding more than 50 different votes over the last few years, when there was zero chance of it passing the other house and being signed by the president.

Yes, I know McConnell is in the Senate, and it’s the House that keeps pushing the anti-ACA bills, but it’s not like he and Boehner aren’t in cahoots.  When one of them farts, the other says “Excuse me.”

Also, it’s not a “show vote,” for the people that are greatly aided by the birth control portions of the ACA.  And I’ll tell you one more thing… If I hear one more jaggoff spout off about not wanting to “pay for sluts to have sex,” I’m gonna scream.

That’s a low-grade bumper-sticker sentiment and people saying that are either willfully or genuinely ignorant of the basic facts at play.  Providing birth control is chump change compared to picking up the costs of birth and care for lower income people having unwanted babies.  It’s spending one dollar to save hundreds.  It LOWERS the amount of money coming from our tax dollars; it does not raise it or add to the deficit.

Also, there’s the added kick that increased use of birth control reduces abortions, which is a goal on both sides of the issue.

As with any other issue over the last 6 years, I have a pretty good suspicion of why the Republicans are fighting it so hard… 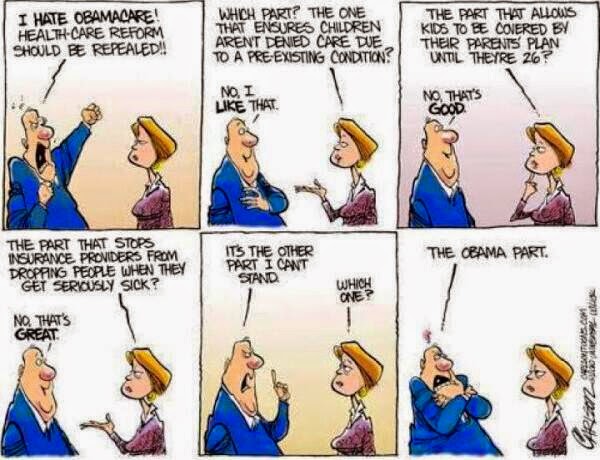