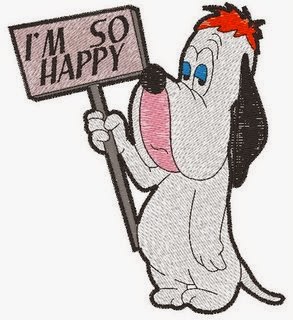 You know, once you pass a certain age, your birthday entails a significantly lesser level of pageantry than it used to. 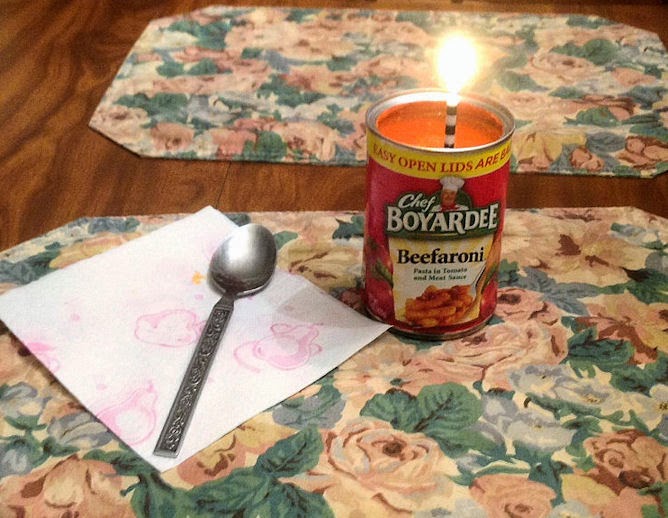 Happy Birthday to me!

Some of you may have seen this shot on Facebook or Twitter.  But before you feel sorry for me, you have to know that I set it all up.  Not that I didn’t have Beefaroni for my birthday dinner… I totally did… but I had a big lunch earlier in the day, and didn’t need a big dinner.  Plus, Chef B is still one of my guilty pleasures.

The genesis of this idea started with my parents.  We were talking on the phone the week before and they asked if I had any big plans for my birthday.  I said “No, just my traditional birthday dinner at Denny’s.”

Remember when Denny’s used to give you a free dinner on your birthday?  Back in my old retail life, while I was living far from my family and friends, I used to partake in the Birthday Special.  (And yes, it was just as sad and pitiful as it sounds.)  So it became a running joke about my birthdays, and my annual trip to Denny’s.

When we were on the phone, I reminded them that they don’t offer that deal any longer, I said, “Maybe I should just stick a candle in a can of Chef Boyardee, instead.”  Then the thought of posting such a picture on Facebook occurred to me, and I couldn’t stop laughing.  I knew I’d have to do it.

I even had to go out and pick up some birthday candles, just for the shot.  Granted, I was already out getting an eye exam that evening, with the intent of finally getting a decent pair of glasses.  (I wear contacts 100% of the time.  My only glasses are from 1994, and the prescription is woefully out of date.)

See, that’s what my birthday celebrations have come to now.  I went for an eye.  Although if it weren’t for my Beef-a-Roni candle idea, I could have eaten at Wendy’s.  The things I won’t do to try to get a laugh…

Earlier that morning, I took my annual look at my birthday horoscope.  It was unenlightening, as usual. 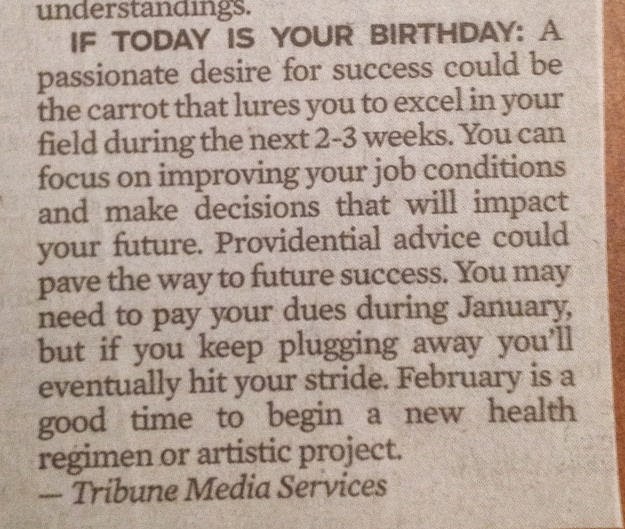 I don’t see anything useful there.  I was more concerned with the list of birthdays. 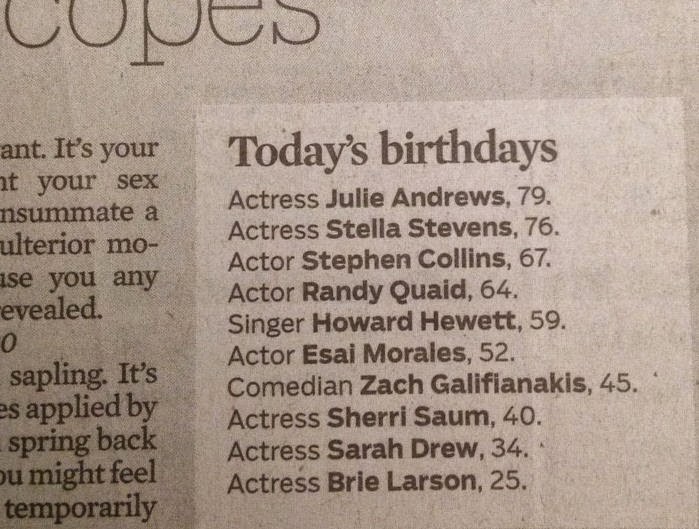 The bottom three, I’ve never freakin’ heard of.  Zach Galifianakis is a recent addition, in the last couple years.  Steven Collins? Isn’t he the guy in the news for molesting children?  I think our communal horoscope failed to catch that little turn of events.

The others, I’ve seen every year since I can remember.  But I notice that one was missing… Jimmy Carter also has my birthday.  I know he’s old news and everything, but is an ex-President really less relevant than those 3 young twits at the bottom of the list? 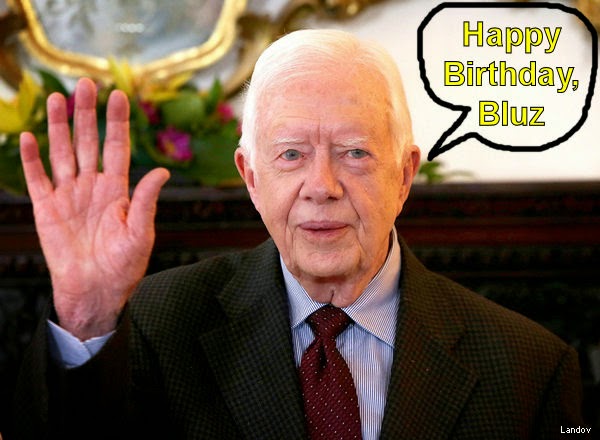 “I got you a sandwich… bacon, lettuce and tomato, with malaise.” (Source)

Anyway, no complaints about a boring birthday; the weekend totally made up for it.  I already told you all about going to the Orioles ALDS game on Friday, and the sports bar on Sunday.  But on Saturday, I went with my brother and his family to the Ohio State / Maryland game, in College Park MD.

This was our first time visiting the Maryland’s Byrd Stadium.  I’ve been here 17 years, and my brother, significantly longer, but neither of us had ever been.

Long story short, it was OK.  I mean, the game was great… the Buckeyes pretty much mopped up the place with the Terps, as they were expected to.  And it was the first sell-out there in ages.

But there didn’t seem to be a lot of enthusiasm in the stands.  I mean, even early on, when the Buckeyes had the ball, you could hear a pin drop.  That’s when the home crowd was supposed to be roaring.  I was sitting smack in the middle of the Maryland side of the field, and there was nothing going on.  I guess it will take a little while, to warm up to football in a big-time conference.

Anyway, here are a few pics I took, from my very nice vantage point at the 32 yard line… 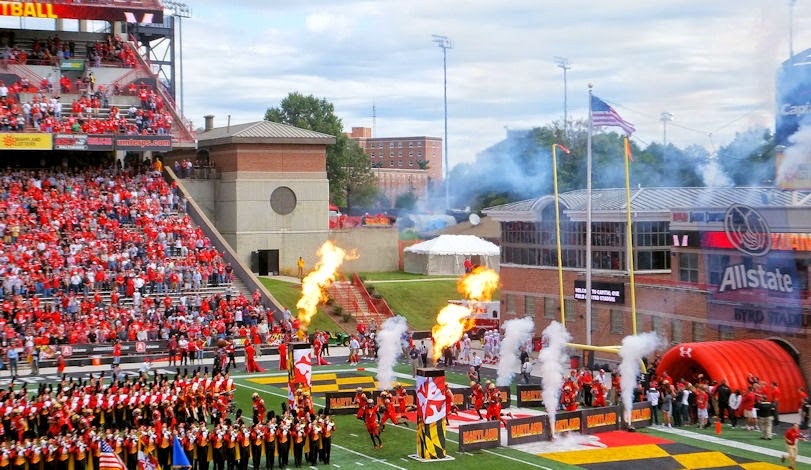 The Terrapins coming onto the field.  This was one of their only highlights of their day, this and their kicker making a 57-yard field goal. 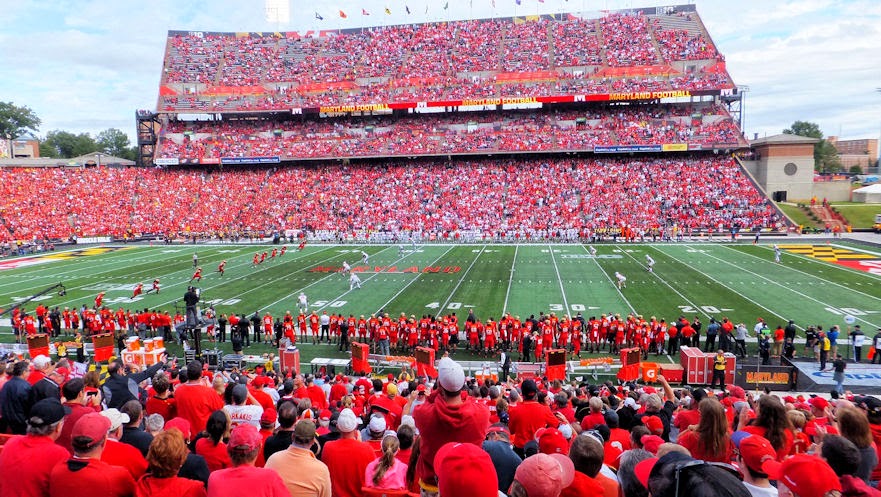 This was my vantage point.  Pretty sweet, huh? 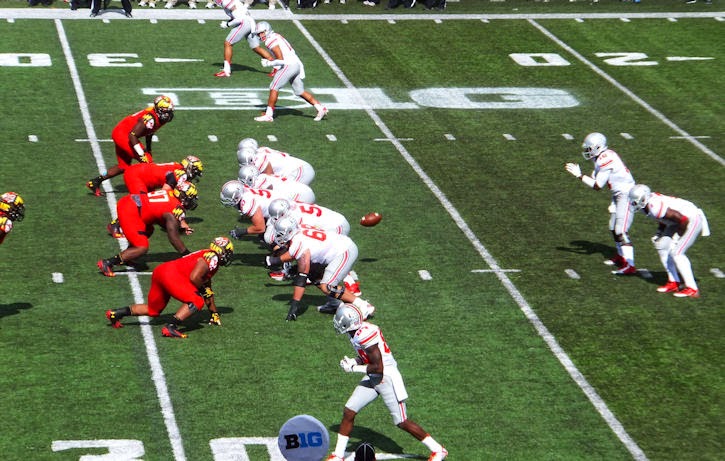 It was cool because I had a lot of opportunities to zoom in and get action shots.

The Buckeye didn’t bring their world renowned marching band, so the Maryland Band had to hold down the musical fort.  They were OK, but not nearly as large or snappy as the Best Damned Band in the Land.

One thing they did have going for them were capes! 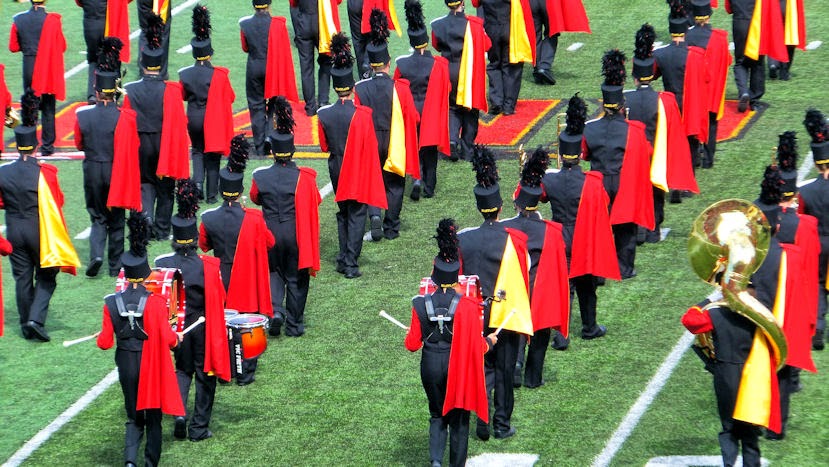 Or rather, I should say “half-capes.”  It looks like they all have a 1970s drapery slung over their backs.

You just don’t see many people wearing capes any more.  Thor and Batman, that’s about it.  I think we should bring back the cape into general usage. 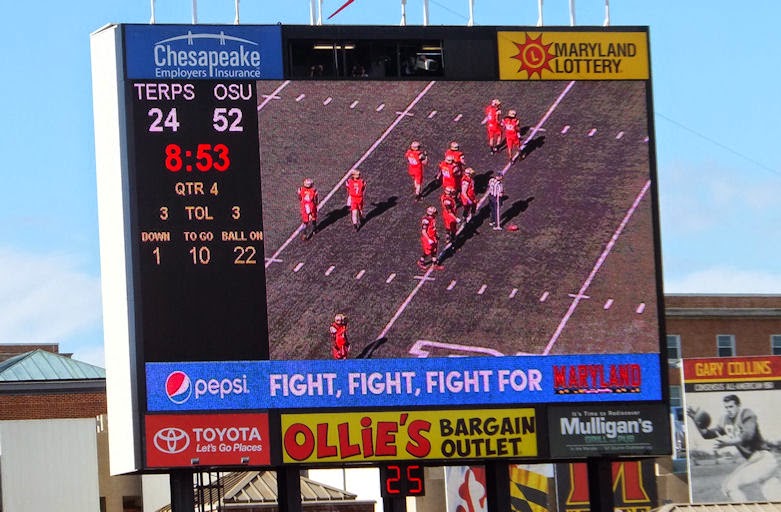 It wasn’t too much longer after this point that we figured the Buckeyes’ lead was pretty safe.  That ended up being the final score.

So, that was Birthday Week.  Started slow, but ended up in grand fashion.  With capes.

Next adventure on deck: Bluz gets a ticket to Game 2 of the American League Championship Series for this Saturday!  Not sure if it will be blog-worthy; we’ll just have to see how it goes.
Posted by bluzdude at 6:54 PM