Being a Free Spirit Has its Limits

Last Tuesday was the last big event from the Summer of Bluz; I went to see another concert.  It was a show downtown at the Baltimore Soundstage, and I went by myself.

I thought I’d be able to scare up some happy hour company, but no one could come out and play, so I just went to a bar near the venue, and waited it out.  I should have taken it as an omen… it’s a special kind of torture when there are six TV screens within view at a bar, and all of them have racing on.

I’ve been a big fan of the artist I was going to see, since the early 90s.  I guess you could call him a folk singer… he sings funny songs, story songs, and occasional balls-out rave-ups (although not this night, because he didn’t bring a backing band).

But I don’t want to say his name.  Although I’m about to complain about the show, I love the guy’s work and I’d hate to discourage you from listening to it, should by chance you accidentally hear a song of his.  Granted, this is highly unlikely.  I’ve never once heard one of his songs on the radio.  In fact, I don’t know a single person who knows of this guy, (excluding those I’ve played him for).  To be honest, I didn’t think there would be more than a couple dozen people in the venue for the show.

When I walked up to the place, about 10 minutes after the doors opened, there was a line curling around the sidewalk out front.  I’d say there were about 50 people there, which was double the amount I thought would show up, in total.  So I guess he was known a little better than I gave him credit for.

As I settled into line, it began to rain… Omen #2.  Not too hard, fortunately, but enough to be concerned about, especially with the lightning flashing in the distance.  They had someone out in line, checking IDs and issuing wrist bands to anyone that planned to drink.  I got my wrist band, but I don’t know if I should be amused or insulted that she never asked for my ID first.  I prefer to think she considered me too honest to pull an under-age drinking scam.

For me, I was seated in a perfect spot; back in a corner, off to the side, on a 2-step raised area. 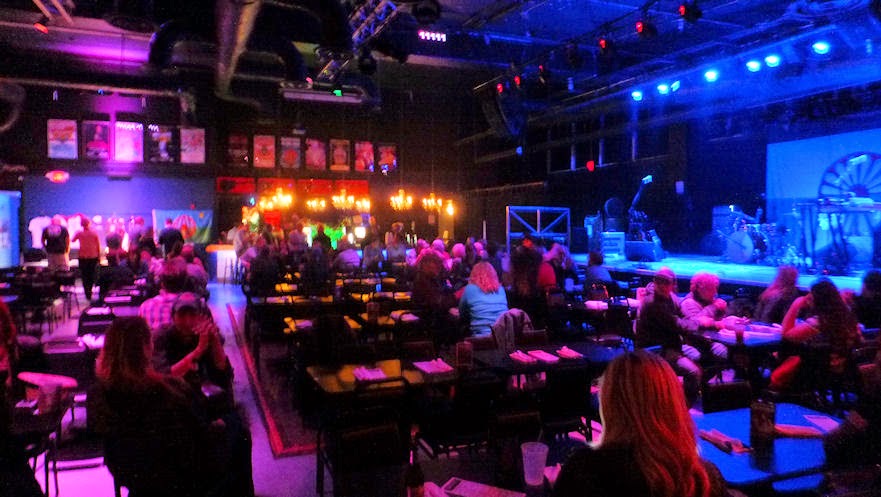 I liked that they had seats and tables there.  That helped seal the deal when I was deciding on whether I should go.  I’m too old to be standing all night for a show.

As the place filled up, I struck up a conversation with the (marginally) older dude beside me.  He said he tried to see this guy the last time he was in town, but he never showed up for the show.  He said it was like being at an airport; “They would make announcements. ‘He’ll be here in a half hour.  He’ll be here in 15 minutes.  He’ll be out any minute now.’  Then they said he wasn’t coming.”

He guessed they thought they could sober him up enough to play, but were unsuccessful and had to pull the plug.  He said he swore he’d never come to another one of his shows, but here he was, hoping for the best.

I was also concerned with the timing.  I came in on the subway that morning, and I knew it stopped running around midnight.  I asked the waitress if she knew how long the artists were expected to play.

She told me she’d seen the set schedule and it should be over around 11:30.  I was happy because that would give me plenty of time to get to the subway, which was only a couple minutes away.  It was still going to be a late night though.

When the feature act came on, I got chills.  There he was, singing and playing just like I’d heard on his live albums.  It was very cool.

Early into his set, people started calling out what they wanted to hear.  He handled it well, I thought.  There was a table up front who apparently had a lot of ideas.  He told them, “I appreciate the energy, but I got this.”   The line killed.

And he’s right… let the man play for a while before calling out requests. 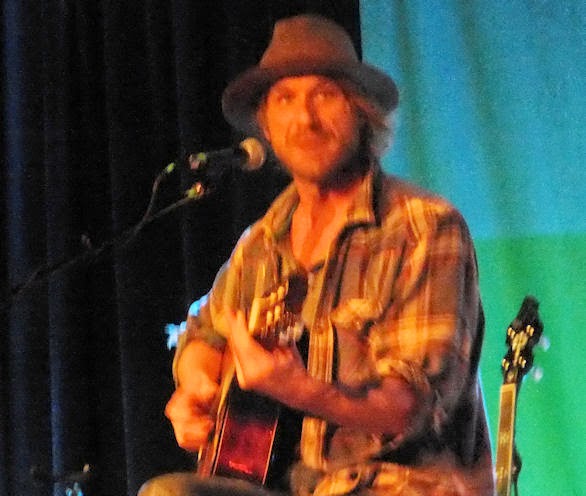 This picture is not intentionally altered, for identity concealment.  For the life of me, I could not get a picture in focus, with this lighting, (which rarely changed, all night).

He played another couple of songs, but next thing you know, some ushers showed up at that table up front, and began escorting the whole party out… about 10 people in all.  As that began, the artist stood up and said, “I can’t be a part of this, so I’m taking a short break,” and walked off the stage.

I looked at the guy beside me and he was like, “See?”

But he came back out about five minutes later, and resumed the show.  He explained that they were trying to talk to him while he was playing, and it was throwing him off.  He said, “I can sit here and talk to you, but then I wouldn’t be able to play some of the songs you all came to hear me play.”

He said, “I know you all paid money to hear me play and you think that makes me a professional.   But let me tell you, I am not a professional in any way.”

It kind of fit his whole rap though.  This was a guy who was basically a derelict, who had lived on people’s couches while he basically Forest Gumped his way around the country.  He said, “Do you know what the difference is between a ‘freeloader’ and a ‘free spirit?  Three chords.”

The crowd wasn’t quite sure what to do now.  No one said a word, and applauded every song.  For the next hour or so, he had us in the palm of his hand, telling stories and singing his songs.

But eventually people started calling out for songs again.  At one point, he was playing the intro to on tune, someone called out a song, and he instantly switched to the intro of that song.  It was pretty slick.

He played two more songs and then ended with “This Land is Your Land,” and walked off-stage.  I kept wondering if this was just another “break,” so I (and the rest of the crowd) just sat there nervously, wondering what to do.  Then a couple of roadies came out and began taking stuff off the stage and shortly after, the house lights went up. 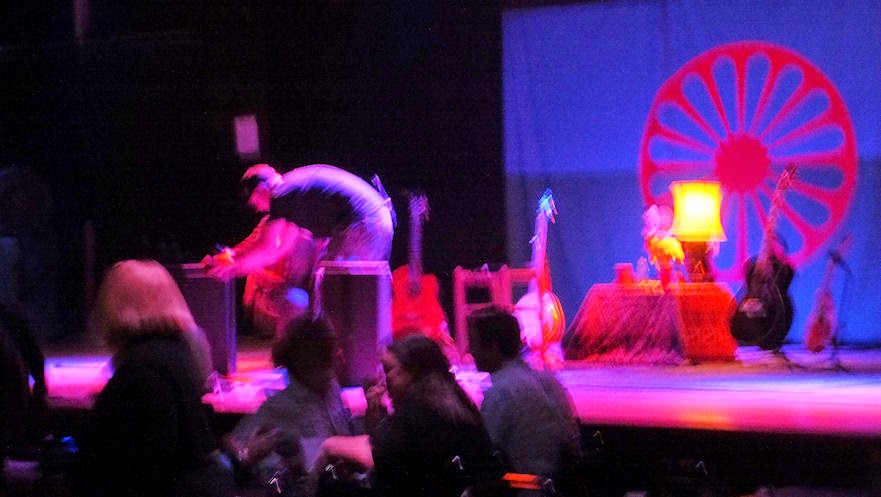 But in this case, A) I knew for a fact that he was supposed to play for another hour, and B) I’d see his set lists on Facebook, from his prior couple shows.  They ran about 30-33 songs.  He played 20 songs on this night, and that’s counting three of his extended stories as songs.  I figure I saw about two-thirds of his show, and missed a number of my favorites that he was likely to play.  Am I wrong to be disappointed?

All summer, I’ve been looking forward to seeing this show and then writing it up, to both share the experience and tell you all about this relatively unknown artist.  As you can clearly see, this was not the post I anticipated writing.

The sad thing is that now I feel like enjoying his music has been ruined for me.  I mean, over the next couple days, every time one of his songs came up on my MP-3 player, I’d skip it, like, “Too soon!”

I know there are “free spirits” out there, but I don’t care about the guy’s disclaimer about not being “professional.”  If a room full of people pays their hard-earned money to come see you perform, you get your ass out there and put on a show.  Period.  Surely he’s dealt with harsher crowds before… hell, this one loved him and was dying to show it.

So I tried to look on the bright side.  I did get to enjoy a night out, see a show, and get home in close proximity to my usual bedtime.  But I fear I’m always going to look at it as an opportunity missed.

No one has ever accused me of being a starry-eyed optimist.

Director’s DVD Commentary: If for some reason you care to know who this artist is, there is enough information in the first paragraph for you to Google it.
Posted by bluzdude at 6:42 PM

Email ThisBlogThis!Share to TwitterShare to FacebookShare to Pinterest
Labels: Bluz LIfe, Bluz Music, Things That Piss Me Off