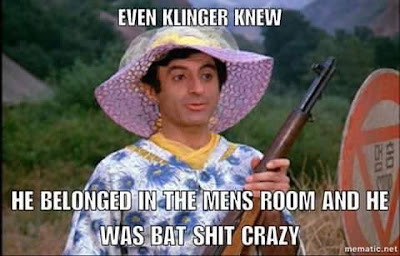 This is how you know that conservatives just don’t understand the situation.  People like Klinger, who last I checked, isn’t even a real person, aren’t the ones fighting for the right to use the women’s restroom. (Let alone hiding out in there and waiting to ambush women.)

MASH was a TV comedy and Klinger was a joke.  (Except for being a Toledo Mudhens and Tony Packo’s hot dog fan; that was totally legit.)  Using this character to back up prejudicial claims shows how weak a hand they’re trying to play.  It’s another symptom of the general GOP promotion of ignorance.  The truth is complicated, but everyone can understand biased generalizations (with a touch of dick fear).

The people affected by this issue are those with recognized psychological conditions… they identify, usually from birth, as a member of the opposite sex.  They live their lives as they feel they were meant to be, often times going through surgery or hormonal therapy.  These aren’t just dudes traipsing around in a dress for the hell of it.

Again I say, show me where there’s been an attack in a women’s restroom by a guy wearing women’s clothing.  It’s just not happening.  Fox “News” even admitted that this is a solution in search of a problem.   But I wouldn’t put it past conservatives to send some guys in dresses out into the women’s rooms just to make a scene, so they can go, “See?  There it is. We told you so.”

I think this is a bunch of rednecks finding a way to send some select “prey” into the men’s rooms for the sole purpose of getting their asses kicked.  Transgendered men living as women are the only ones at risk in this whole equation.

And I’m pretty sure that’s exactly the way Republicans want it.

Going hand in hand with the Klinger meme, I also spotted this one: 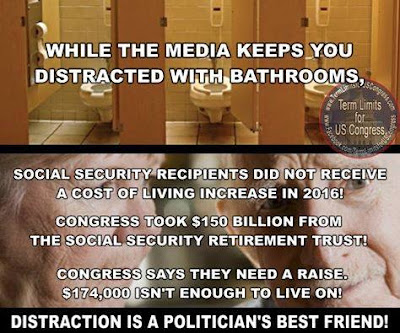 First off, this isn’t necessarily a conservative meme, although the person who posted it definitely was.  The bottom half is all about Congress and an appeal for term limits, using the Social Security system as a wedge.  But what pissed me off was the opening line about the media.  That’s a traditional “Kill the messenger” GOP strategy.

The thing is, it wasn’t the media that wrote and passed these repressive “bathroom laws,” it was the Republicans.  It’s the media’s job to report on what politicians do, especially when there is an uproar about it, and that’s what they’re doing.

If a state government passes and enacts a law in a two-day span that’s so reprehensible that major business abort plans there and national touring acts cancel shows, in what world is that not going to be reported?  Not to do so would be a gross dereliction of duty on the part of the media.

What I ask instead is: why is a governmental body so concerned about so few people?  The number of transgendered Americans is estimated to be about 700,000, or 0.3% of the population.  Contrast that with the estimated number of LGB Americans, which is 8 million, or 3.5%.

Think in personal terms.  I can name (after a minute of consideration) more than a half dozen gay or lesbian friends or acquaintances (not including their significant others).  But the number of trans people?  None.  Maybe I’m sheltered (I don’t think so), but I don’t know any.

Maybe that’s why it seems so easy for people to shit on trans people… they don’t know any and therefore, don’t really understand the condition or surrounding issues.  People fear what they don’t understand.

It was the same with gays for the longest time; then the more people came out, the more people who knew them changed their attitudes, until we are finally where we’re at today, in terms of acceptance.  (Which is not all the way there, by any means, but a hell of a lot further than we used to be.)

The meme is right on one thing: legislation like this bathroom law IS a distraction issue; it’s just that it’s not those reporting the issue at fault; it’s the creators of the issues.  They know as long as we’re fighting over self-created problems, we’re not looking for solutions to real problems from an ineffective government.